Are Pokémon like Throh and Sawk wearing clothes, or is it part of their physical bodies? 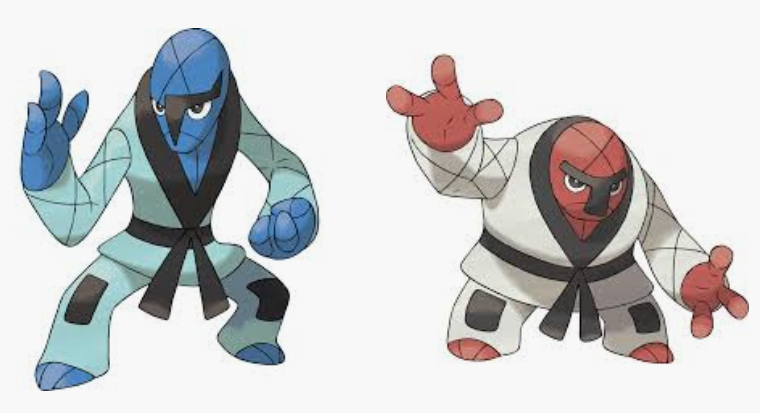 As seen above, the two Pokémon Sawk and Throh have on what appears to be karate gi uniforms. Gameplay-wise, when a Throh or Sawk is bred through the Daycare, the baby Throh/Sawk will always be born with a karate gi on.

What I am curious then is, is the gi an actual layer of clothing they wear? Or is it a part of their actual body, like Jynx?

The Black Pokédex entry on Throh mentions they use vines to make their belts which would indicate that at least the belt is clothing.

When it tightens its belt, it becomes stronger. Wild Throh use vines to weave their own belts.

On a similar note the White and Alpha Sapphire Pokédex entries for Sawk mention about tying their belts but doesn't state that they make them. We can probably assume they are clothing from this though.

Tying their belts gets them pumped and makes their punches more destructive. Disturbing their training angers them.

Apparently they were going to put Sawk in Detective Pikachu but when they showed the design to the Pokemon Company, they informed them that the gi was indeed Sawk's skin so they scrapped his design and didn't put him in the movie because they didn't want to give him a skin-gi.

Nordby says there were about 25 Pokémon that were cut during the process after being deemed too complicated to translate. The martial arts fighter Sawk, for example, was discarded when animators failed to agree on the texture of its judo-inspired outfit. “For Pokémon, what might feel like clothes is actually skin,” he says. “We would have hour-long conversations trying to wrap our heads around that.” https://time.com/5582906/detective-pikachu-pokemon-visual-effects/

21
When Pokémon hatch from their egg, are they full size?
10
Why can Pokémon learn moves that are outside their type?
12
Why do Staryu and a few other Pokémon not say their names when all the others do?