I remember reading a short story in a Marvel annual many years ago where a group of young adults were bet they couldn't spend a night in a haunted house.

So they took the challenge and spent the night there. In the morning they went to collect their bet. The challenger then took the group back to the house only for them to find that the house was no longer there. The house itself was the ghost.

This is "I Speak of the Haunted House", which appeared in Tales of Suspense #42, published June, 1963. Story by Stan Lee and art by Steve Ditko.

Two friends make a bet about the existence of ghosts. One bets the other a hundred dollars he will see a ghost if he spends a night at a particular house and the other skeptical one accepts. He enters the house at night proceeds to look around areas like the basement and attic but sees nothing. Hours go by, and he is completely bored and eventually drifts off to sleep. When he wakes at dawn, he happily leaves the house to collect his hundred bucks. His friend tells him that he'd like to show him something before paying, and at first he gets mad thinking him a welcher, but when they drive back to house it is no longer there. His friend explains to his astonished convert that the house itself is the ghost appearing only one night a year for twelve hours.

Found with a search for marvel comic bet "haunted house"

Comics panels are available here, and here's the ending page as you remember. 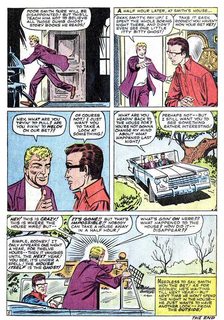 Not the answer you're looking for? Browse other questions tagged story-identification marvel short-stories ghost or ask your own question.

5
Movie (or TV show) story with haunted house and organ playing
10
Short story where man awakens in a grave, escapes and then realizes he has become a ghost
20
Sci-Fi short story that involved time travel and a couple who keep losing each other
9
What dystopian TV show has kids running an underground newspaper?
7
Kindle book about a woman who helps remove ghosts from houses
42
Animation movie (80's-90's) with brain-sucking insects
6
Fantasy book about a group hunting down a dragon
4
Book about a pair of girls who help a ghostly girl in a locked room move on
11
Old short story about robot Christmas toys fighting for supremacy