Webcomic about flying ships and teens in WW2

Does anybody remember a webcomic with flying ships that act like battleships, world leaders talk to cats or panthers who are spiritual guides, teens fighting a war that looks like world war 2... but with big flying birds on one side and technology and big flying battleships at the other?

I think this is probably Alpha Shade. It was a pretty well-done comic, decent art quality, reasonable depth in the story, but it ran out of steam pretty quickly.

It's more World War I technology than WW2, except for a scene set in a more advanced world (equivalent to current Earth) where two of the cast are playing a MMO war game. 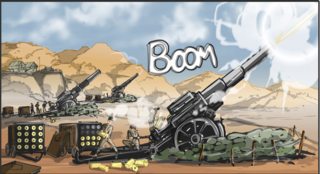 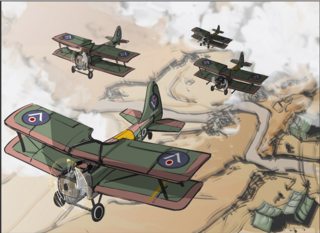 The side that has the biplanes has deployed from flying ships: 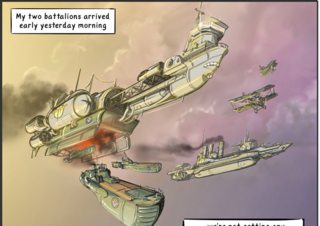 The biplanes are fighting an enemy that mounts giant feathered fliers. 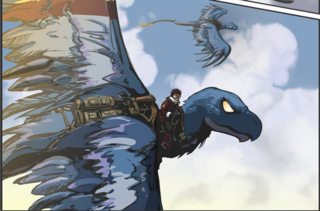 There are telepathic cats that may be panthers that act as leaders or advisors (they are addressed as "Lord" by lower classes, but treated by leaders as equals). 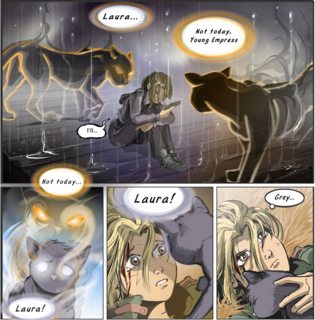 14
Book about mankind entering the space age and their first contact with two civilizations in sol
26
Books about dragons and war from a cat-loving author
10
Sci-Fi: Story about an astronaut and telepathic feline-like aliens
4
Movie about a kid with superpowers who fights monsters, has a hamster-like friend who the enemy makes fall into a pit and become a monster
9
Webcomic about a robot girl able to use magic who moves to the city to go to school
15
Book with a cat who reveals to his reporter owner that cats can talk
7
Eighties novel about robot killers who look like kids assassinating various military leaders, politicians and scientists
6
Book Identification - Children's sci-fi book about videogame aliens
11
Space war, humans recreated, grown from plants with an alien female supervisor
7
Dystopian manga set in a post industrial world where old technology is forbidden and everything is steam/air powered