What does Carolinus's letter say?

In the 1982 film The Flight of Dragons, the Green Wizard Carolinus writes a letter to his allies, the Yellow Wizard Lo Tae Zhao and the Blue Wizard Solarius. We hear the wizards reading from the letter, and also see a brief glimpse of the letter itself: 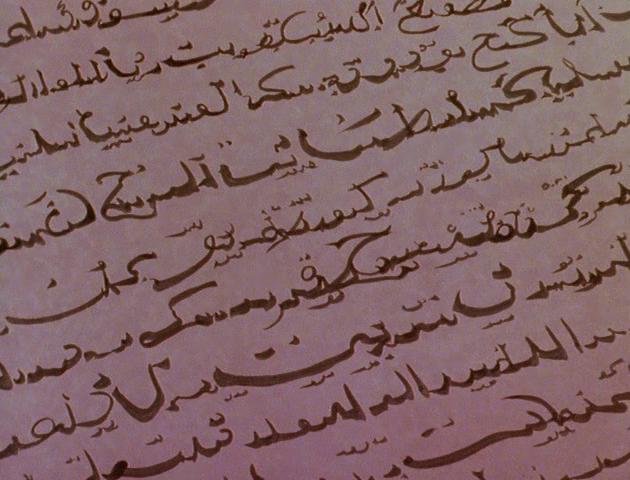 The writing system looks like it uses the Arabic alphabet, or something like it. Does the letter shown in this film still say anything in any known natural or invented language, or is it just nonsensical scribbles dreamed up by some artist working for the film? If the text is comprehensible, what language is it in, and do the words have any relevance to the plot?

Browse other questions tagged languages translation the-flight-of-dragons or ask your own question.

15
What does Q*Bert say when he dies?
4
What did Worf say during his ascension ceremony?
3
What do these runes in Adventure Time say?
31
In Iron Man 2, what does Black Widow say to Tony Stark in Latin?
13
In Interstellar, what does the Hindi text displayed for the drone say?
7
What does Oliver Queen say in Russian?
23
What does Toph's wanted poster say?
8
What does Frodo say when he pulls out the phial?
14
In The Cyberiad, how did the letter n manifest in Polish?