I am looking for a comic that I read as a kid somewhere in the 80's. I read it in my native language (Dutch), but the style and theme looked very much like American comics of that time, so it was most probably a translation.

The story was set in the near future, in a world ruled by business cartels. The main protagonist was a muscular young male who participated in gladiator-like boxing matches, where participants wear high-tech gloves to enhance their strength.

There was an antagonist who cheated by wearing illegal gloves that enhanced his strength even more (something like 10 times instead of the regular 7 times). I also remember there was a young and rich woman, who was in love with the protagonist and confesses to him that she is actually very old (over 80 years old or so?), but was able to afford medical treatment to make here look young again. 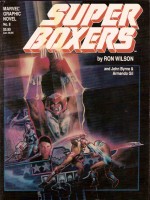 In the near future Corporations have assumed control of Earth, with the result that the rich have gotten richer – and more bored – whilst an underclass excluded from all rights and privileges scuttles to survive in the dirt beneath their lavish skyscrapers. As the poor daily trade their freedoms and dignity for another meal, in the world of the mega-rich and their wholly-owned contributing citizens, survival is just as harsh and all-pervasive.

Businesses survive and grow by consuming each other and everything is produced to facilitate that overweening drive: product, entertainment, people. The Corporations are in a perpetual state of Cold War, ostensibly working together but always looking for an edge and a hostile takeover. Delcos is one such business: CEO Marilyn Hart has never been one of the boys, and now her one-time colleagues, sensing weakness, are closing in for the kill…

In the world below Max Turner is a star. A scrapper to his core, he works as a prize-fighter: an old fashioned palooka using his fists (augmented by cybernetic gloves, boots and body armour) to get by in a brutal arena of social Darwinism, providing dangerous entertainment for his daily bread. The Corporations also have Super Boxers: pampered, gussied up, genetic thoroughbreds with their entire lives geared to those explosive moments when they unleash their pedigreed savagery in high-tech arenas for the pleasure and profit of their owners. The greatest of these sporting warriors is the godlike Roman Alexis. 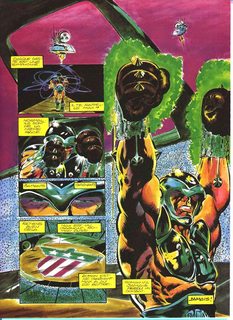 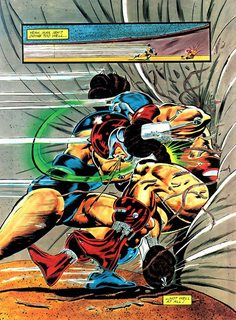 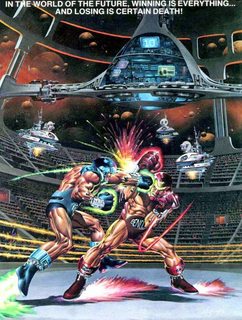 I can't find any review of the storyline other than that it's pretty standard boxing fare with the plucky underdog fighting much stronger opponents. Marilyn Hart is the head of futuristic cosmetics company, so it wouldn't surprise me to learn that she's actually much older than she looks.

Found by searching for near future comic enhanced boxing gloves

14
Novel about a dragon lord who has to wear gloves at all times
12
Identify book where murdering antagonist uses FTL communication to bypass 3-implant-per-person limit
6
YA book about a young powerful female caster attending a school that trains in magical arts and duels
5
A book where a man inhabits the body of a dying man and befriends a telepathic cat
33
Old science fiction novel about a man of the near future awakening from suspended animation to find himself in a technophobic theocracy
16
80's Novel that has long-lived people and gyroscopes
7
Anime episode with duel/fight sequence where villain blows light and heavy bubbles, mentor interferes, goes to hell and takes villain with him
7
Sci-Fi book I read in the eighties. Dystopian future where violence is porn