Where are the towns of Hyrule in Legend of Zelda?

On the first NES game, you only see a few people-merchants in caves-and other than that, you only run into Zelda. Where is the rest of Hyrule? Where is Kakariko village or even the main castle?

Sticking only to canon facts from the game/manual:

The first game is set in "a little kingdom in the land of Hyrule". Ganon attacked this kingdom with his army, conquering it and stealing the Triforce of Power. The princess of the kingdom, Zelda, scattered the Triforce of Wisdom throughout the realm and commanded her nursemaid Impa to search for a hero to overthrow Ganon, an action with angered Ganon enough to imprison Zelda, and send a force out after Impa, who fled through mountains and forests to escape them. It's unclear exactly how much of Zelda's kingdom is depicted in the first game, but note that Hyrule itself is a larger land that the kingdom is set within; furthermore the kingdom has just been conquered by Ganon, and it's possible that any towns or strongholds it had were razed at the time. The game seems to be set in a wilderness area of the kingdom; there are several mentions to forests and caves in the manual. Either there never were towns in this area of Hyrule, or they were destroyed by Ganon's army. It is unclear exactly how much time passes between Ganon conquering the little unnamed kingdom, and Zelda putting her plan to hide the Triforce and send Impa for help into action; it's possible she has been living under Ganon's rule long enough for some time, enough for nature to start reclaiming any potential remains.

With the second game in the series, we get more of a look at the larger land of Hyrule. The overworld map shares areas showing the little kingdom from the first game, but also shows a much wider area including many towns (Saria, Ruto, Rauru, Mido, Darunia, Nabooru, Old Kasuto, New Kasuto). Death Mountain, with the distinctive Spectacle Rock, is found in both games, to give some idea of location - the second game is set mostly to the north of the first game, with Death Mountain being the overlap between them, and the entirety of Zelda 1's map being tucked down in the south west corner at a much smaller scale. The backstory tells us that at one time the entire land of Hyrule was a single country, ruled over by a single monarch, presumably from North Castle, which is where the second game begins and where the sleeping princess Zelda is located. It's unclear whether North Castle or any of the towns are still even a part of the smaller little kingdom at this time; they might all be outside its borders.

The question asks about Hyrule Castle and Kakariko Village. In A Link to the Past, these are found in somewhat central Hyrule, south of Death Mountain. Looking at the scale of the map in Zelda 2, there is a possibility they are found further south of the entire Zelda 1 map; either that, or they were destroyed at some time in the past.

Edit: I have put together the Zelda 1 and Zelda 2 maps to show the overlap: 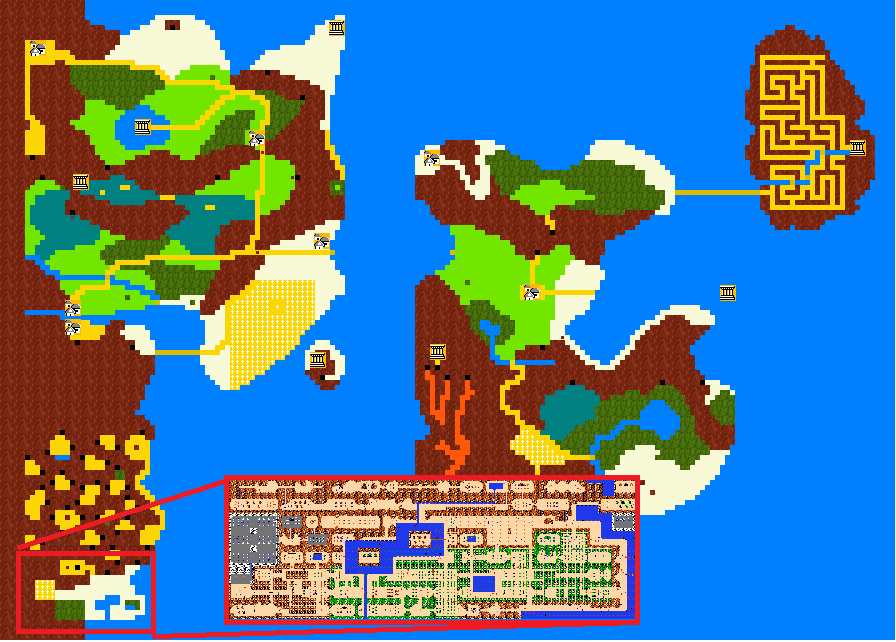 Note the features that line up between the two areas. Death Mountain is in the north, containing Spectacle Rock (about a third of the way along). The distinctively shaped lake with a river running south is found in both maps, with a coastline to the east. The graveyard area lines up, with the lost woods to the south west, and there is a smaller pool surrounded by forest to the east.

Information from the Zelda 1 and Zelda 2 manuals, and the Zelda 2 overworld map: 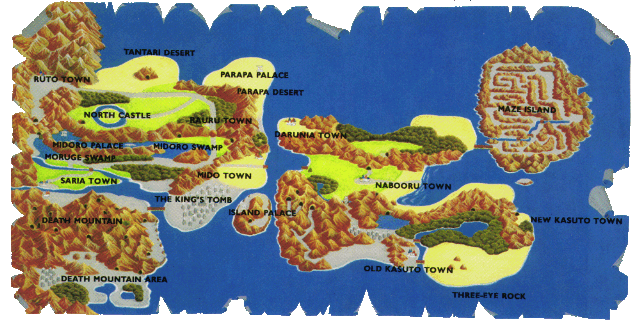 To add to Showsni's answer, I never thought to overlap Death Mountain from both legend of Zelda and Zelda 2. Using Zelda 2's map: Turn Legend clockwise and slide it's death mountain into the same death mountain of Zelda 2. Take Link to the Past and turn it upside down, but tilt it's death mountain slightly toward the 2 and mash it in. There would be some overlap(and a slight stretch), but the 3 maps together do work, with separation by the mountains or sea.

And the part about Legends being a conquered kingdom was great. The remaining survivors gathered what they could to help and hid in caves/wherever they could. Ganon installs dungeons as bases to back him up using minions to keep the current kingdom conquered. Link comes along possible lone survivor and goes on a kill crazy rampage. It makes sense in this fantasy world!

5
How are the pieces of the Triforce distributed?
5
Who are the characters on this Legend of Zelda poster?
13
Why is Ocarina of Time the splitting off point for the Zelda timeline?
1
Do the events of Ancient Stone Tablets fit in the Hyrulian timeline?
11
Is the Triforce of Power inherently evil?
10
Where is Termina with respect to Hyrule?
5
What is the Real Scale of the Breath of the Wild Map?
6
Was Link using the Master Sword in the first two NES Legend of Zelda Games?