Was Tuvok bluffing when he said that Voyager's transporters rendered the Kazon weapons useless?

In Star Trek: Voyager 2x07 "Maneuvers", Voyager beams several Kazon Majes off their ship. Tuvok and a complement of security officers are in the transporter room waiting for them, and the Majes draw their laser pistols.

TUVOK: Please stay where you are. You will find that our transporters have rendered your weapons useless.

This is the first time I'm aware of in which someone said that transporters could disable weapons. Was Tuvok bluffing*, given that the Kazon are unfamiliar with Federation technology? Or is this an actual capability that Voyager's transporters had?

* Tuvok indicated in "State of Flux" that he is very much capable of lying to complete a mission, as he did with joining the Maquis: "I was honest to my own convictions within the defined parameters of my mission."

This capability of the transporter was previously established in the TNG episode "The Most Toys". Data begins to fire a disruptor, but is caught in a transport beam as the weapon begins to fire:

O'BRIEN: I'm reading a weapon in transit with Commander Data. It seems to have discharged, sir.

Data then materializes on the transporter pad, his weapon inactive.

And if memory serves, the Kazon immediately check their weapons after Tuvok makes his claim. If they were functional, I doubt they would have hesitated to fire.

Let me quote from the Memory Alpha page on transporters, emphasis mine:

By the 24th century, the transporter had the capability to disable any active weapon during transport. This could be accomplished by removing the discharged energy from the transporter signal, or by "deactivating" the weapon itself. The transporter system included weapons deactivation subroutines to control the process. (TNG: "The Most Toys", "The Hunted", "Rascals")

The transporter was also capable of removing weapons entirely during transport, a setting referred to by Starfleet as "Transport Protocol Five". When the Defiant beamed aboard survivors from a damaged Jem'Hadar ship, the transporter was programmed to remove the crew's disruptors and other weapons. (DS9: "To the Death")

So, yes, TNG-era federation transporters have the capability to deactivate weapons. It seems that this capability has to be explicitly enabled (and that it works with Ferengi weapons as well); let me quote the plot of the TNG "Rascals" episode:

[...] they start using combadges to beam the Ferengi behind the force field on the transporter pad and the weapons deactivation program to disable their sidearms.

The relevant bit of the script for that episode is...

...and you can see the LCARS interface they used in that episode to enable the "weapons deactivation subroutine" in this screenshot: 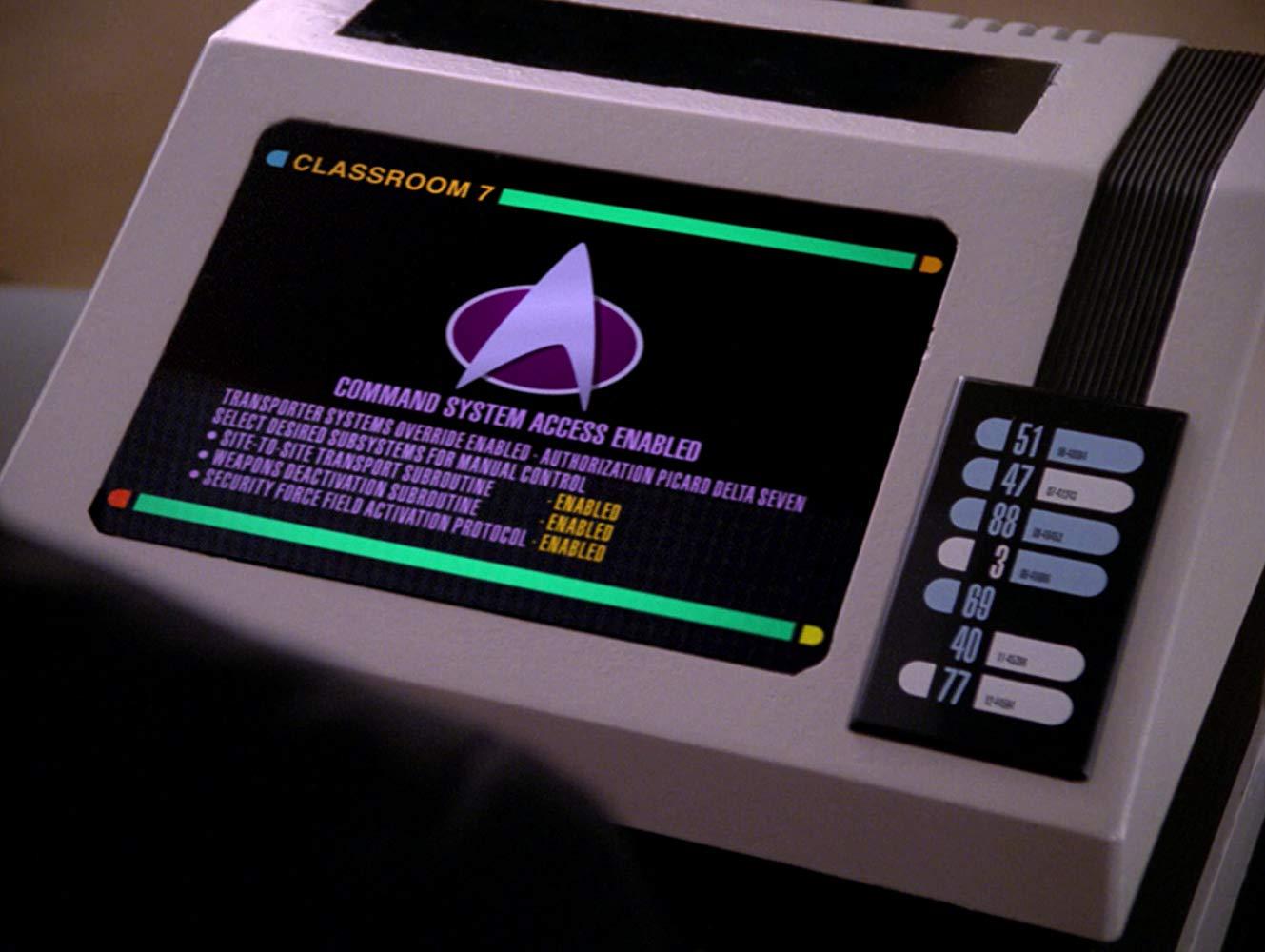 And as for "protocol five", let me quote the script of the DS9 episode "To The Death":

Why does transporter protocol five remove the weapons entirely when the deactivation subroutine would have been enough? I have no idea. Do these affect melee weapons (e.g. blades) as well? I also have no idea. In any case, the federation transporters in the TNG era have the capability to detect weapons and either deactivate or remove them.

Starfleet transporters from the TNG era onward include a device that can detect and disable an active weapon. https://en.wikipedia.org/wiki/Transporter_(Star_Trek)#Capabilities_and_limitations

Not the answer you're looking for? Browse other questions tagged star-trek star-trek-voyager star-trek-transporter or ask your own question.

11
What was the largest object that the Enterprise-D could transport onboard?
19
When was it clear that the EMH on Voyager became sentient?
5
What was the content of the 20 million gigaquads uploaded to Voyager's computer in the episode entitled “Twisted?”
11
What happened to the orchids when Tuvok and Neelix were un-merged?
13
How did the Borg collective gain information about Voyager's weapons inventory?
14
Why can't humans resist the Borg when they’re smart enough to design weapons against Species 8472?
4
When was the phrase “it is a good day to die” first said in a Star Trek [franchise] production?
5
Why didn't Tuvok tell Janeway that R'Mor would die before giving him the messages?
12
When was the earliest opportunity the Voyager crew had to return to the Alpha quadrant after being stranded?