R. A. Salvatore novel set in Faerûn - main character is a female werewolf who has dealings with priestesses of Selûne

I'm trying to remember this book I read some time around 2008. I remember it as a book with R. A. Salvatore's name on it, I'm not certain if he wrote it or co-wrote it, which is why I couldn't identify it from his bibliography.

I read the paperback edition and I remember its cover having a distinctly brown color scheme.

The book sees a female werewolf and her encounters with Selûne priestesses. There's a male supporting character who, from what I can remember, wields a rapier.

You're referring to Feena Archwood, I suspect.

Feena was the daughter of Maleva. Her mother, knowing that Feena was a werewolf, sent her to mother Dhauna Myritar at Moonshadow Hall, a temple of Selûne in Yhaunn, Sembia. At the temple, she was trained to control her inner wolf and to become an acolyte. In her stay at the temple, she met Mifano, who was a novice and an acolyte with her, a young man with silvery hair who was extremely flirtatious. Velsinore, their elder sister and the priestess in charge of the acolyte dormitory, always gave Feena harder punishments, maybe for the fact that she was a werewolf. Their relationship was always distant but Feena felt a sort of respect towards Velsinore. This respect was for her great devotion and passion towards Selûne.

Neither of her books, Black Wolf or Mistress of the Night were by Salvatore, but both have a brown color scheme and are set in the Forgotten Realms. 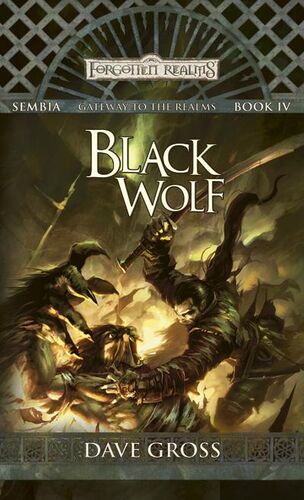 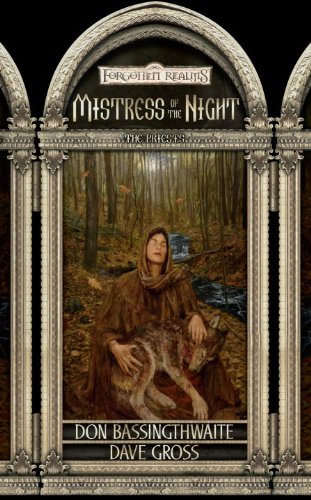 Found via a search for "r.a. salvatore" priestess selune, which caught Salvatore's name as a "Readers also enjoyed" section on the Goodreads review for Mistress of the Night.

Not the answer you're looking for? Browse other questions tagged story-identification books werewolf or ask your own question.

10
Looking for a fantasy trilogy from the early 2000s
4
Webcomic (Keenspot?) about an amateur stage magician in a world where magic is real
7
Book: Young man attacked by wild animal (bear?) and rescued by shifted werewolf-woman (princess?), changed to be rescued, existing betrothal
22
ID 1970s/1980s pb sci-fi anthology: Story 1, children use high-tech toys as weapons, hold parents for ransom; Story 2, alien spy falls for Earth girl
6
Book about an alien librarian
6
Book about a girl who can shapeshift into various forms, like hyena and squirrel