90s(?) book about a female protagonist, who was in an accident and is transplanted into a cyborg body

I read this book between 1999 and late 2004. I am pretty sure it had a blue cover and may have been published by Penguin. It was a paperback.

The story goes, as far as I can remember, that after an accident her body was too badly damaged and she was implanted into a cyborg or bionic shell, which had been cast aside by other wealthy people who upgrade their "cyborg bodies" when they get bored or for new upgrades. Undamaged real bodies were a premium and the poor could sell their healthy bodies for money to purchase older model cyborg bodies.

I think the protagonist has recurring memories or that they play a part in it somehow.

If the timeline is correct but some of the other details may not be, I suggest this might be Spare Parts (1999) by Sally Rogers-Davidson. As you can see the cover is blue, and it is indeed published by Penguin (specifically Penguin Books Australia). 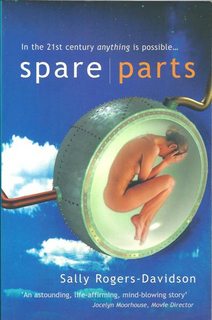 Kelty, the protagonist, doesn't suffer an accident herself but her best friend Mary does. (She is caught in an explosion at the recycling plant where they both worked, which happens before the story begins.)

‘But they can fix you up,’ [Kelty] assured her friend. ‘It’s amazing what they’re doing with bionics and plastic surgery and stuff.’

‘Yeah,’ Mary said bitterly. ‘If I was a Skywalker.’

Kelty couldn’t argue with that. How could a C-grader ever hope to pay for that kind of expensive treatment?

(Note the term "Skywalker" is used for A- and B-grade citizens who actually get to live above the perpetual smog.)

Skywalkers might occasionally donate a used human body when they move on to a newer/younger one:

Skywalkers changed their bodies like they changed their cars, and they rarely had such good reason to seek out new flesh. Turning forty was a good enough reason for most of them to discard a less-than-perfect body, but they could afford to buy a healthy young body. Of course, sometimes if the Skywalker was feeling altruistic they might donate their used body, but the lower grades could rarely afford the cost of a transplant.

Cyborg bodies are also very expensive, but an option if for some reason no suitable human body were available:

‘What about a cyborg body?’ Even as she said it, Kelty knew it was impossible. Cyborg bodies were just as expensive as healthy, young human bodies.

After the accident, Kelty sells her human body to pay for a transplant for her friend Mary, accepting a cyborg body for herself:

‘Very lucky. Unless I’m sadly mistaken, we should be able to arrange a very good deal for you, Miz Holmes. More than enough to pay for a state-of-the-art replacement body.’

Napoleone dropped his hands back down to the desk, but Kelty managed to look him in the face as she asked, ‘And Mary?’

‘You could make it a part of the deal that the client donate her used body to Mary, and I’m offering to perform her transplant at a generous discount, which should mean you’ll have enough to cover the cost of both transplants.’

There's an extensive excerpt from the book available on the author's website.

The timeline is slightly off, as this came out in 2008, and a few of the details are also different, but is there any chance this could be Skinned (aka Frozen) from Robin Wasserman's Cold Awakening trilogy?

The protagonist is a teenage girl who was put into a bionic shell after her body was badly damaged in a car accident. These shells are only affordable to the incredibly wealthy. (However, unlike your recollection, her shell isn't second-hand, and it's not yet common for people to have this procedure done; many are wary of the process still.) The protagonist's memories also play a large role, as she has recurring flashbacks to how she used to be and all the ways her body is different now.

And, as the link shows, there is a blue cover.

6
Book about implanting minds in new bodies and a young woman who sells her body to an old woman and wakes up in a new one
6
Teen sci-fi written before 2003 - body upgrade, synthetic bodies?

8
Book: Female protagonist transformed into alien on alien planet
8
Late-90s book about teenagers who transform into supernatural creatures
5
80s/90s book with huge female warrior protagonist and her huge horse
16
Book where the protagonist gets into an accident and has an operation where her brain is put into a robot
13
Book about a professor who summons a female demon
9
Book about axe-wielding protagonist who goes berserk in battle and blinds a woman
13
Looking for space spy book with female protagonist
11
80s/90s fantasy book: female protagonist, demon-related magic, “knife”/“blade” in title…?
6
90s or 80s Sci-Fi movie about a female cyborg / robot