In 1952, Jean Bruller wrote Les Animaux dénaturés under his pseudonym, Vercors. According to Wikipedia, the book was translated into English three times:

Are there any salient differences between the translations? Which one is considered the most authoritative?

From what I can tell, all three of those are using the same translation; the different titles are down to different publishers.

According to ISFDb both You Shall Know Them and Borderline were translated by Rita Barisse. Vercors was her husband and she translated many of his works. Given that, we should likely consider this a canonical translation.

This appears to be a case where the same book was published with different titles in the U.S. market (You Shall Know Them: Little, Brown and Company) and the U.K. market (Borderline: Macmillan and Co.).

As for The Murder of the Missing Link, the linked review has this to say:

The ridiculous title conceals Vercors' "You Shall Know Them," and has the one beneficial result of giving it a mystery classification, and hence a lower price than SF.

This edition has "(Original title: YOU SHALL KNOW THEM)" on the cover: 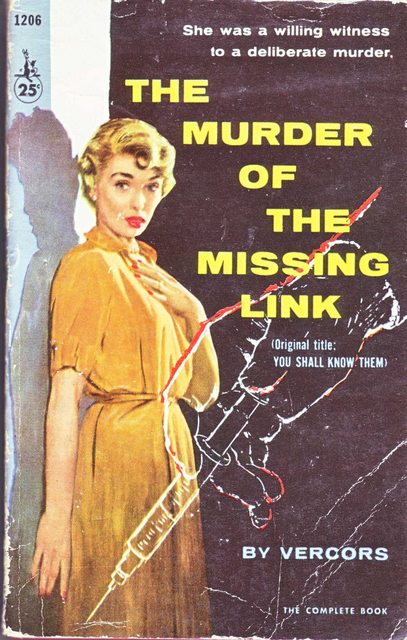 (Note that the same reviewer had previously reviewed You Shall Know Them when it was released, so he would presumably have noted any differences as that would have been germane to his review.)

Not the answer you're looking for? Browse other questions tagged translation les-animaux-denatures or ask your own question.

28
Are there any better English translations of Solaris available, beyond the original translation from French?
11
What bits were cut out of Jules Verne's "The Mysterious Island" for the Kingston translation?
13
In Interstellar, what does the Hindi text displayed for the drone say?
10
What are the lyrics and translation for the Nazgûl theme music?
9
Are the discrepancies between different translations of the audiobooks intentional?
9
Are there English translations of works of Manfred Langrenus?
6
What should this conversation between Tiffany Aching and Preston mean?
19
What is the Hong Kong Businessman shouting before he tries to jump out the window?
4
Were the Escape Reports contents any different in the original Japanese FF7 script?
5
In the Japanese original of "Bastard!!" what are the "Demon Gods" called?