Why were the crew so desperate to catch Truman and return him to Seahaven?

During Truman's first escape attempt, he travels for several minutes at high speed before encountering a range of increasingly unlikely obstructions, culminating in a police road block and an (alleged) nuclear leak.

Is there any indication what the crew were so keen to stop him from seeing? Did the road lead to an exit or a wall (or even loop back around to the other side of Seahaven) or was there some another reason they didn't want him to go any further?

One of the earlier manuscripts tells us what he was kept from seeing: staging for his Fiji trip. After Truman is greeted by name from a policeman he's never met, Truman bursts from the car and is wrestled to the ground. The original scene ended differently

TRUMAN bursts past the alien-looking HAZARDOUS WATER WORKERS in their protective suits carrying detection instruments.
The workers give chase in their cumbersome suits, trying to cut off his path.

Nearing the edge of the forest, Truman hears the sound of hammers and saws. But before he has time to see the source of the sound, he is tackled to the ground.

As SEAHAVEN POLICE OFFICERS drag him away, one of the WASTE WORKERS walks the remaining few yards, pushing aside a wall of tropical foliage. We now see what Truman was prevented from seeing.

A Polynesian island is under construction by dozens of RIGGERS, PAINTERS and SET DECORATORS. Large cranes are lifting palm trees into place, a fake volcano is being tested in the distance and rehearsals for a firewalking ceremony are underway complete with hot coals, DRUMMERS and FIREWALKERS in native dress.

At the foot of the steps, TWO WOMEN in Fijian dress are being shown the correct way to present a floral lei.

FIJI WOMAN: Did he see us? 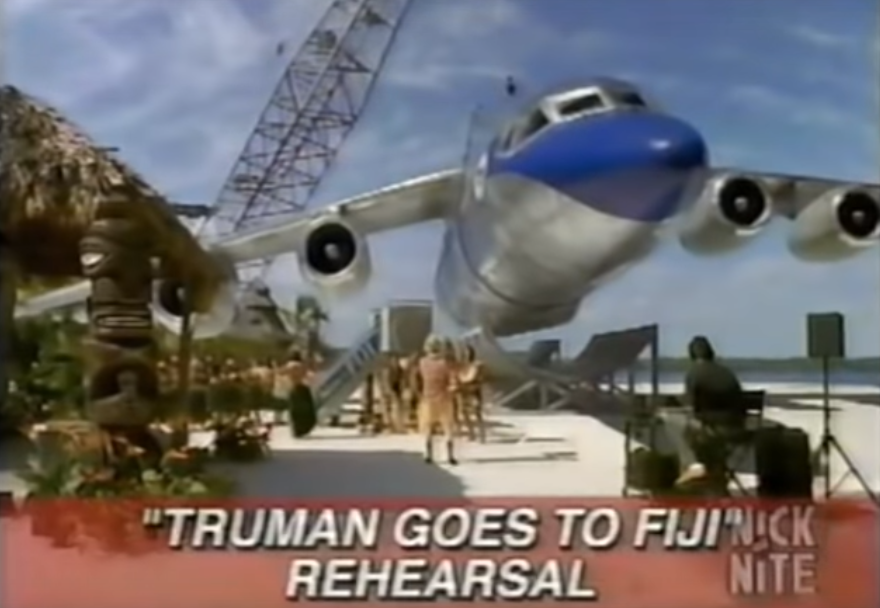 Not the answer you're looking for? Browse other questions tagged the-truman-show or ask your own question.