This anime was shown in the earlier 2000's on Toonami.

I remember a boy with a sword who had to go on a journey around the world. He met a girl with brown hair, but he was reluctant to help in the beginning.

The girl had two guns that she called Uzis (I think), but they were shaped like this and were red and white: 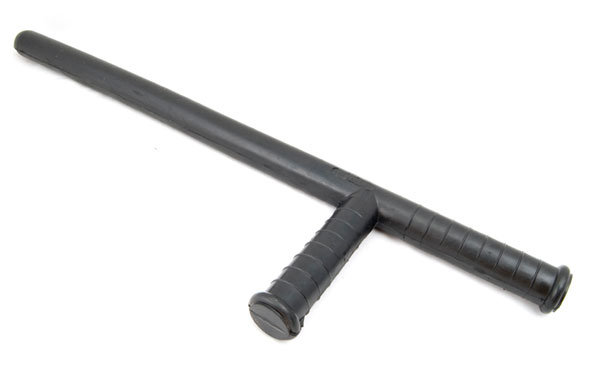 I remember one episode where the girl had to get her guns fixed, or something, but the shop owner actually made them too powerful and they had a huge recoil when she shot.

This is Rave Master, which began its run on Toonami June 5th, 2004.

The main character Haru Glory, is chosen by the holy artifact known as Rave to wield the Ten Powers and go on a quest with the strange dog like creature known as Plue to find the other four remaining Rave stones and put an end to the usage of Dark Bring and bring peace to the world. In his travel, fate brings him to ally himself with a girl that lost her memories and believes she is named Elie and is unaware that she has a strong involvement with the Rave stones. Together on their quest, they gain allies known as the Rave Warriors which consist of the thief that can manipulate silver known as Hamrio Musica, a cartographer which is the strange blue creature known as Griffon Kato, Let Dahaka and Julia who are both martial artists and members of a species from the mystic realm known as the Dragon Race, Ruby, a rich penguin-like sentenoid, and Belnika, a kind sorceress.

The boy is Haru Glory and the girl is Elie and her Tonfa Blasters.

Her M-644 model are red and black in color, and can shoot multiple rounds of bullets, much like a machine gun. This feature is especially useful when Elie goes on a rampage and tries to shoot everything. The blasters are held using a handle that lays towards the side of the blasters so that the blasters lay across the user’s arms. As a result, they still function as regular tonfas for close combat and self-defense, such as Elie blocking attacks from Rosa’s blade.

During the Lance arc, they were mistakenly modified to fire stronger rounds with less ammo. When Elie first learns to use magic, she applies Etherion to her tonfas during her fight with Koala, replacing her ammo to fire magic bullets. 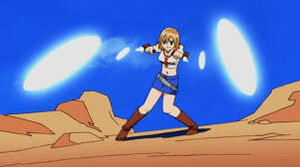 I found this with a search for anime girl tonfa guns red and white. Good work on details provided.

Not the answer you're looking for? Browse other questions tagged story-identification anime toonami or ask your own question.

7
Anime about a boy and a corrupt village
6
Anime about a girl that is saved from a strange life form in a forest by a man
10
Anime about boy & summoning monsters
8
Anime short about two girls shooting each other with guns from their mouths
7
Anime: teen (boy or girl) goes into a kind of floating city (?) and there are fights between the teens
28
Gory anime with pink haired girl escaping an asylum
5
Anime with fighting and magic weapons?
3
Sci fi card game adapted to anime with neon green cat girl