Why would he ask about Project Genesis?

Wouldn't the USS Reliant, a ship dedicated to helping the Genesis scientists, have far more information in its computers? Khan used the Ceti eels to control Captain Terrell's mind. He could just order Captain Terrell to give Khan access to the computers.

If Khan did have access to the memory files on the USS Reliant, he would not need to ask Admiral Kirk. In asking Admiral Kirk, Khan revealed his intentions, which a super-genius probably would not do. He also alerted Kirk to go to the science outpost, Regula I, since that is where the Genesis scientists did their research.

What happened when Khan beamed up to the USS Reliant that kept him from getting access to the computer memory files on Project Genesis?

The crew of the Reliant were kept on a strictly need-to-know basis about Project Genesis. They were given enough info to do their jobs with safety, but nothing more than that.

Khan questioned Terrell only briefly, but it seemed to give him great pleasure to extract information from Chekov. By the time he finished, he knew each tiny detail of what precious little anyone on Reliant had been told about the classified Project Genesis. He knew where they had been, he knew where they were going, and he knew they reported to Dr. Carol Marcus.

When he interrogated Chekov, he learned that Kirk would have access to the full Project Genesis files.

With an edge in his voice, Khan asked, "Could he find out about it?"

Kirk was a member of the Fleet General Staff; he had access to any classified information he cared to look up. Chekov tried desperately to keep that knowledge from Khan Singh. His mind was working so fast and well that he knew, without any doubt, what Khan planned. He knew it and he feared it.

Valorum's answer is good - but, keep in mind, Khan does try to get the information first from Regula:

First, Khan learns about Genesis (as well as Kirk) from Chekov and Terrell:

So Khan heads to the Regula station to retrieve it / the device.

TERRELL: He tortured those people. But none of those people would tell him anything. He went wild. He slit their throats. He wanted to tear the place apart, but he was late. He had to get back to Reliant in time to blow you to bits.

Khan asked Kirk about it because Khan had failed to get it from the scientists, and as we see (and as Valorum shows from the novelization), Kirk is an Admiral and he literally has eyes-only access to the Genesis material: 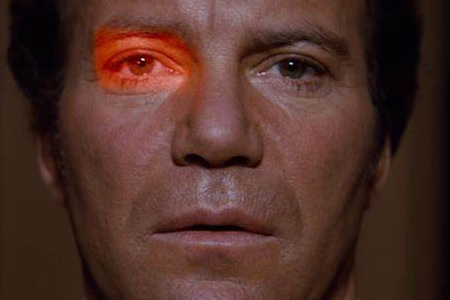 One important thing to keep in mind is that the entire plot of the movie is Khan getting revenge on Kirk, and everything should be seen through that lens.

He makes multiple tactical and strategic errors once he realizes that Kirk is in his grasp. Kirk says it's two dimensional thinking, and the like, but Khan's crew catches him in multiple errors... Which he ignores or rebuts with his need for revenge.

The whole successful conclusion of the movie depends on Kirk reeling in Khan with revenge.

From trusting intercepted communications at face value, to letting his guard down when the prefix code is used, to killing the station crew in rage... Khan shows himself to be blinded by revenge.

Forcing Kirk to give up the data is just another form of revenge, with the bonus that it's way easier than doing the hard work himself.

Regular 1's computers had been wipe clean by David Marcus. So no info there. Reliant had only little need to know basic. Kirk had little info, just the basic proposal sent to Star Fleet by Carol Marcus, for the funding of the project. David Marcus had all the information in his head, because he had designed and created the project. But being his father's son he cheated. He used unstable material to accelerate the process that was genesis.

12
Why did Khan keep Ceti eels?
1
How did Valkris obtain information on Project Genesis?
14
James T. Kirk: Why "Tiberius"?
11
Why didn't Khan beam Kirk up from the planet when he beamed up the Genesis Device?
28
Why did the Enterprise not have any HAZMAT suits?
22
Why didn’t Lt. Saavik tell Kirk to bring Spock's body to Vulcan instead of leaving it on Genesis?
24
Why didn't Khan get resurrected in the Genesis Explosion?
5
Why did James Kirk and the Enterprise return to Planet Genesis so soon?
22
Why didn't James Kirk destroy the Reliant instead of (or while) trying to escape?