Aurialis/Auriolis(?) Book about alien cats on planet with heavy storms

I read this book in Dutch in the early or mid-nineties.

I believe the plot had to do with a human male landing on a planet where catlike aliens had to travel around the entire planet where heavy winds were blowing regularly. They use their tail with a hook on the end to move forward in heavy storms.

Two of the feline aliens have sex at one point by interlocking their tails.

On the planet Coriolis, an incessant storm with wind force ten rages, the trade storm. Plants and animals have adapted to this condition. Coriolis is inhabited by the osborks, feline predators, who communicate through their thoughts. Kazazi Bogdan Siliqi is a female osbork; she is sentenced to a circumnavigation of the world as a Follower of the Trades. On the way she meets a human who has made an emergency landing on Coriolis. They befriend and together they try to survive amidst all the dangers that nature and the other Osborks have in store for them. 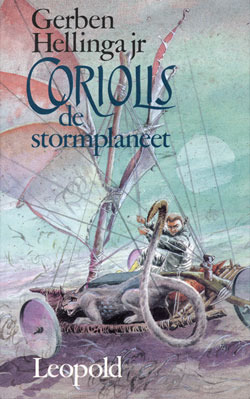 10
Identify series of books - collecting memories from the dead (robots and humans battle)
6
Story about psychic humans who crash on a planet, fight off attack by enemy aliens
6
Trying to find a book about aliens taking over earth and making us fight with them
13
Looking for space spy book with female protagonist
8
Movie: astronauts visit a Mars-like planet with aliens passing as humans, alien embarks the ship, which destructs before landing on Earth
29
Story about two rival crews terraforming a planet
13
Science fiction story about aliens that turn into butterfly or moth-like creatures at the end of their lives
7
Short story: alien has sex with human woman, then turns into candy
19
Short story about two heavily bio-tech modified humans getting "married"