As per the title, I remember getting about half-way through the first book of the series, which has the following points as far as I can remember (some may be erroneous):

I believe this is likely Wolf Brother by Michelle Paver, first book of the Chronicles of Ancient Darkness series (which has six books in it, not eight). 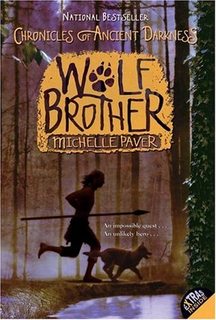 In pre-agricultural Europe, the hunter-gatherers of the Forest live in clans, each represented by a particular animal or life form. Torak and his father, of "Wolf Clan", live together in the forest. During Torak's twelfth year, his father ("Fa") is killed by a bear which has been possessed by a demon. Before Torak's father dies, he tells Torak to swear an oath to head north and find the Mountain of the World Spirit, and ask the World Spirit to help destroy the bear before it kills all life in the forest. His father tells him that his ‘guide’ will find him and help him on his quest. Torak reluctantly leaves his father as the bear comes back to kill him. Torak heads north and soon encounters an orphaned wolf cub. Torak initially tries to kill the cub to eat it, but he doesn't have the heart. He discovers that he can communicate with the cub. The Cub smells Torak and realises he is from the Wolf Clan, who was fed by a wolf as a baby, and accepts Torak as his pack-brother. He realises the cub is the guide, and Torak names the cub "Wolf". Over time they become good friends. A few days later Torak and Wolf are captured by the Raven Clan, who accuse Torak of stealing one of their roebuck. They are taken to the Raven camp so Torak's fate can be decided by Fin-Kedinn, the Raven Clan leader. Torak's captors are a teenage boy named Hord, a girl named Renn, and a man named Oslak.

In the Raven camp, Torak is taken to Fin-Kedinn. Unlike the other Ravens, Fin-Kedinn treats him with kindness and respect, until Fin-Kedinn realises who Torak's father was. To regain his freedom, Torak fights Hord, who is much bigger and stronger, to prove his innocence. He wins by temporarily blinding Hord with steam from some broth which is cooking nearby. This, together with the dog whistle which Torak has made to summon Wolf, makes Fin-Kedinn and Saeunn, the Raven mage, sees Torak as the possible fulfilment of a prophecy about a "Listener". The prophecy states that the Listener, who "talks with silence and fights with air", will offer his heart's blood to the World Spirit and thereby kill the demon-bear. One interpretation of this prophecy is that Torak must be sacrificed, and his blood taken to the Mountain of the World Spirit. Fin-Kedinn reveals to Torak that his Fa was the Wolf Clan's mage, and the Demon Bear was created for the sole purpose of killing his Fa. They then lock Torak away while they debate his fate.

Torak escapes, helped by Renn, who believes that Torak must go to the Mountain of the World Spirit himself. Renn tells Torak the rest of the prophecy, which says he must find three parts of the "Nanuak", the brightest soul, to please the World Spirit and ensure its aid. On their journey together, guided by Wolf, Torak finds the first part of the Nanuak when he falls into a river, the second part in a cave, and the third part while crossing the treacherous glacial flow close to the High Mountains. Nearly at their destination, Renn and Torak are recaptured by the Ravens and taken to the Raven Clan's new temporary camp. Fin-Kedinn releases Torak, believing him to be the one who should go to the Mountain. Fin-Kedinn also reveals that Torak's Fa was killed because he dedicated himself to thwarting a group of rogue mages, the Soul Eaters, who have turned to evil in their determination to rule the Forest.

Torak and Wolf climb the mountain, followed by the bear. Torak is unexpectedly attacked by Hord, who believes himself to be the one who must take the Nanuak to the mountain. Torak realises that the prophecy's "heart's blood" means Wolf, and as Wolf carries off the Nanuak, Hord and the bear are engulfed by an ensuing avalanche, and fall down the mountain, killing Hord but destroying the bear. Torak escapes from under his hiding place and looks for Wolf, but he only hears his howl in the distance, along with the howls of other wolves. Torak shouts to Wolf in human language, presumably English, promising that he will one day return for him, before turning to head back into the forest.

It's set in early Europe, there's a boy and his wolf, he originally lived with his father, he uses a dog whistle to communicate with the wolf he names "Wolf", and there's a prophecy regarding him and his wolf.

Found with a Google search for fantasy book series boy wolf "can talk", which put me on the Goodreads page for the second book, Spirit Walker.

16
Book about a “barren land” patrolled by monsters - surrounds a teleport, green disease
5
Fantasy book with an adopted son called Boy
10
Book where a boy and girl are transported into a fantasy video game
6
Cartoon series with Infinity gauntlet-like worn by a teenage boy
7
Anime where this black haired boy goes to rescue this girl from a villain
9
Cartoon series about a boy having nightmares
6
Fantasy book: redhead girl talks to animals, is made to stay with her noble father, discovers she's part of a phoenix rebirth cycle