Where was the first appearance of the idea that Batman is the real personality and Bruce is the mask?

Similar to the idea that Superman has three personas, Clark Kent bumbling reporter, Superman worlds greatest superhero, and the real Clark whom he only shows to those who truly know him (the Kents, Lois, Pete Ross, Kara and maybe Bruce); On the flip side the idea that the Batman persona is the real person and the Bruce Wayne persona was destroyed the day his parents where murdered. When was this aspect of the dual identity first explicitly mentioned?

The Batman character dates back to 1939 and has had many writers since then, so this is not a simple question to answer for an absolute "first appearance" of an idea. There's just so much material to look at from comics, movies, tv shows, articles, blogs, etc.

From a wiki page on Batman, in the Bruce Wayne section:

Writers of both Batman and Superman stories have often compared the two within the context of various stories, to varying conclusions. Like Superman, the prominent persona of Batman's dual identities varies with time. Modern age comics have tended to portray "Bruce Wayne" as the facade, with "Batman" as the truer representation of his personality.

The source that the wiki entry pulls from is The Batman Handbook: The Ultimate Training Manual, by Scott Beatty in 2005.

From your comment, I was able to trace and find the episode where you first heard of this flipped dual identity. It's Batman Beyond, episode Shriek (Season 1, episode 7-- aired Mar 14, 1999). The dialogue at the end of the episode is:

Terry: Tell me something - why were you so sure those voices weren't coming from you?

Terry: I hope your other reason is more convincing.

Bruce: Second, the voice kept calling me "Bruce." In my mind, that's not what I call myself.

Terry: What do you call yourself? [Bruce just looks at him for a moment] Oh, yeah. I suppose you would. [Batman voice] But that's my name now.

Bruce: Tell that to my subconscious. (Source) 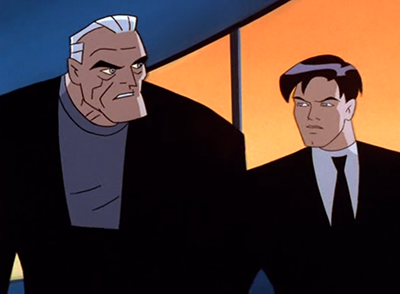 Others have suggested that it's Batman The Animated Series where Batman is the true character over Bruce Wayne.

In terms of pop-culture, I first heard about this alter-ego spin on superhero mythology at the end of Kill Bill: Vol 2, which came out in 2004. Honestly, when I read your question, my first instinct for source material was this movie as it was quite formal in addressing that a superhero is the true persona. 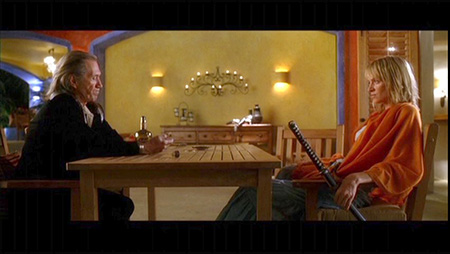 Here is a clip from the famous Superman speech given by Bill from the movie:

Now, a staple of the superhero mythology is, there's the superhero and there's the alter ego. Batman is actually Bruce Wayne, Spider-Man is actually Peter Parker. When that character wakes up in the morning, he's Peter Parker. He has to put on a costume to become Spider-Man. And it is in that characteristic Superman stands alone. Superman didn't become Superman. Superman was born Superman. When Superman wakes up in the morning, he's Superman. His alter ego is Clark Kent. His outfit with the big red "S", that's the blanket he was wrapped in as a baby when the Kents found him. Those are his clothes. What Kent wears - the glasses, the business suit - that's the costume. That's the costume Superman wears to blend in with us. Clark Kent is how Superman views us. And what are the characteristics of Clark Kent. He's weak... he's unsure of himself... he's a coward. Clark Kent is Superman's critique on the whole human race. (Source)

See this brief article, and listen to this podcast for the straight dope. If nothing else, they will make you very happy.

Earliest I can remember (which was also to hammer home how they are two sides of the same coin) was in the Arkham Asylum: A Serious House On Serious Earth by Grant Morrison and Dave McKean. The Joker and his henchmen get the drop on Batman and have him restrained, a henchman goes to pull off Batman's mask, and says something like "I want to see his real face", to which the Joker replies "don't be so predictable for Christ's sake, that is his real face" 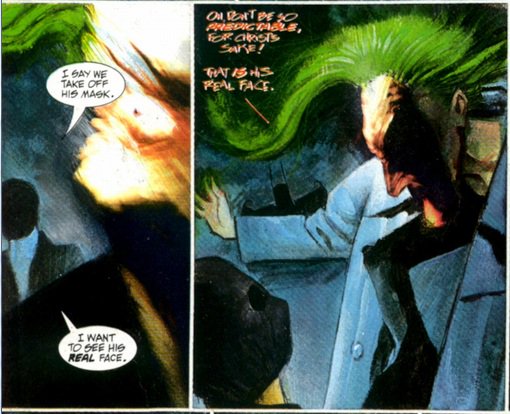 In Batman Beyond, the DCAU series which was set in the future, featuring the next Batman (Terry McGuinnis) fighting crime in a futuristic Gotham, with Bruce Wayne as his mentor. The new Batman features a flying batmobile, an advanced batsuit which enhanced his strength, rocket boots and wings enabling flight, multiple vision modes, direct communication links, and more. He was sort of Batman, wearing Iron Man's armor, with the life of Spider-man.

As cover, Terry serves as Bruce's personal aide. During one episode which featured the new version of the villain Spellbinder (I think, I can't find the episode at the moment) Bruce was seen to be hearing voices. Everyone (including, for a time, Terry) thought Bruce had been driven to dementia. He was constantly hearing his father's voice, calling him Bruce, telling him terrible things.

Throughout it all, Wayne never even begins to consider that he might actually be going crazy - he insists the voices he is hearing are artificial. He eventually convinces Terry, who beats the bad guy.

As the episodes's closer, Terry asks Wayne why he never once doubted he was losing his mind. Wayne said, "The voices kept calling me Bruce. In my head, that's not what I call myself."

Wayne doesn't disagree, but his quasi-cynical smile indicates that he may not fully agree, either.

Batman Beyond ran from 1999 to 2001 (tragically, the finale, which was to have featured a terrorism-related plot, would have aired shortly after 9/11. It was not shown, and the series had no finale until the episode 'Epilogue' of JLU).

Thus, the very latest this episode could have been written is in 2001, but I believe it was from one of the earlier seasons, putting it around the turn of the millennium.

There have been several comic in place where he has been seen as Batman not as Bruce Wayne I agree that his persona as Bruce died when his parents did. The graphic Novel I read recently showed this greatly, however sorry but I have forgotten the dialogue he had wit himself. But it was Batman Year One by Frank Miller. Where he was saying he was string enough to finally become batman although at the time he didn't know how he was going to do it. He had trained and trained throughout his life as he knew he was going to become something more and finally figured out the way of doing it. Another bit from a more recent time was Batman Begins where he says "It's Not Who I Am Underneath, But What I Do That Defines Me". This shows that he is not Bruce Wayne, he is in fact and always was Batman.

Another example is from Dark Knight Returns also by Frank Miller where Bruce Wayne 'dies' but he continues to live the life of the dark knight at the end. going so far as creating an army. He never was really Bruce Wayne after his parents died, he just didn't know who he was to become before he donned the suit.

Sorry if this doesn't answer your questions. I'm new to the Sci-Fi section so not 100% sure how to answer questions like these.

7
Who are the “villains from Star Trek” that Sofie Fatale is dressed like?
12
Is Alfred the moral conscience of Bruce Wayne/Batman?

4
When do Batman and Bane first fight?
32
Has Batman himself ever taken seriously the idea that he indirectly causes Gotham to have more supervillains?
7
Was the idea of Batman inspired by vampires?
22
How does Lex Luthor know Superman's identity?
8
Does Lex Luthor know Batman's identity?
6
How can keeping one's secret identity from a friend or beloved actually help protecting her or him?
16
Looking for a Batman Comic where Batman had real wings
8
Even with his powers, doesn't Superman train and work out?