My memory of it is vague because I read it 30+ years ago. I believe it was published by Penguin. It's at least forty years old.

The basic plot:
Krakens from the deepest ocean come ashore and attack humans in a lengthy siege. They're almost invincible, except for their high internal pressure (having come from miles under the water).

This would be The Kraken Wakes (1953) by John Wyndham. 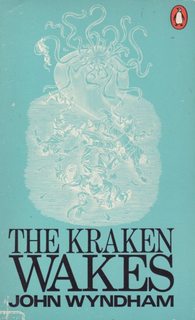 Quoting from part of the plot summary on Wikipedia:

In the first phase, objects from outer space land in the oceans. Mike and Phyllis happen to see five of the "fireballs" falling into the sea...

Phase two of the war starts when ships all over the globe begin to be attacked by unknown weapons and are rapidly sunk, causing havoc to the world economy. Shortly after, the aliens also start "harvesting" the land by sending up biological "sea tanks", which capture humans from coastal settlements, for reasons that are never made clear; the Watsons witness one of these assaults on a Caribbean island.

A point of Stack Exchange etiquette: when posting a question, you’re supposed to indicate what research you’ve done. I recognized the book immediately from your description, having read it myself, but a Google search for "science fiction kraken" brought up the Wikipedia page for this book as the top result. I hope you enjoy rereading the book.

3
Story Identification: Human taught powers by aliens and tries to save the universe
3
Story about teen boy being harassed by harpy on trip to castle
3
Scifi book series: Humans enslaved by aliens
5
SciFi book search, possibly baen?
32
Old story where aliens sell humans some machines to heal anything, and then disappear with their loot before we realize we've been scammed
15
Which book on a deserted planet with a maze and an insane ancient creature?
4
Comic where telekinetic teenagers with super powers roam an island 'disconnected' from the mainland