I just remember two of the stories:

I seem to remember that the front of the book had a big head type image and that is all.

The second story here is "Nanny" (1955) by Philip K. Dick. Apparently it has been published multiple times in different anthologies so I will look for the other story in any of them.

Nanny is a science fiction short story by Philip K. Dick, first published in 1955 in Startling Stories and later in The Collected Stories of Philip K. Dick. It has since been republished several times, including in Beyond Lies the Wub in 1988.

The story takes place in the future where every family has a mechanical robot as a Nanny. A family of four has an older model Nanny, and every night, when the family goes to sleep, the nanny and the neighbor's nanny, which is a different model, meet in the back yard and fight. The Nanny gets damaged and must be repaired, which frustrates the family, as they're advised to upgrade to a newer model.

One day, the kids take the nanny to the park, where it gets assaulted and killed by another, much larger and more powerful Nanny. Their father, upset with this, goes and buys a brand new Nanny, the toughest model available. The kids are excited, but later, their new nanny kills the nanny of another family, whose father is forced to buy another Nanny, an even bigger one.

The first story might be Helen McCloy's "Number Ten Q Street". It does involve a woman buying a steak at a speakeasy for a high price, and being subsequently arrested for it. Most of the story can be read here.

As noted by SQB, one anthology that contains it, Worlds Apart: An Anthology of Science Fiction, does have a cover with a floating head. However, it does not contain "Nanny". 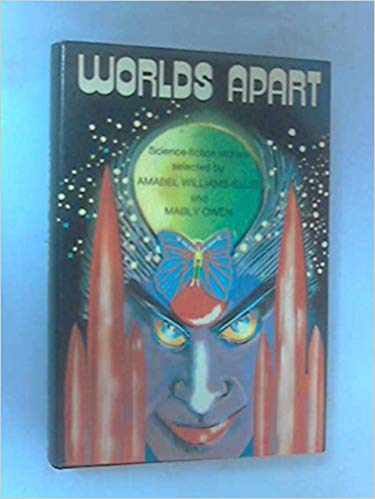 9
70s/80s short story (& compilation) where crossbow-wielding smartypants is killed by a laser
9
SFF Short story anthology: girl named Willow restores planets, and unicorns create balance in the environment
26
Short story where caffeine is illegal and police detective chases down caff-heads?
8
Anthology containing the story "Green Mold"(?) where green mold grows on everything and eventually the astronauts
8
1960s anthology; one story was about people living in cocoons but still looking for one where female scientist is seduced by the plant king
28
Young adult short story book with one story where a woman finds a walrus suit and becomes a walrus
9
Story where real food is illegal but there is an underground org to rebuild
19
SciFi short story about eating only one special food to be immortal