Whereabouts of Odin's spear, Gungnir, after the events of Thor: Ragnarok

In Thor: Ragnarok we see that Loki was on Asgard impersonating Odin since Thor: The Dark World (post credits scene) while he put Odin in a house for the elderly in New York on Earth.

Odin did leave the house and vanishes (or dies, if you'd prefer the term) allowing Hela to escape Hel leading to all the events of Thor: Ragnarok.

Since Loki is shown to be in possession of Odin's spear (Gungnir) in the post credits scene of Thor: The Dark World, it can be assumed that Gungnir was on Asgard. 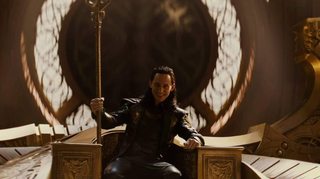 During the final fight between Thor and Hela in Thor: Ragnarok, Thor is seen to be sitting on Asgard's throne holding Gungnir. But after this fight, it is nowhere to be seen. 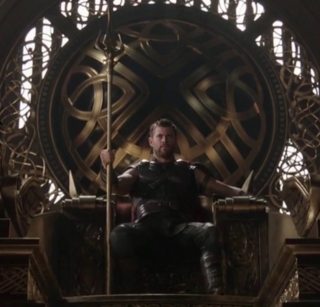 I cannot be sure if these two appearances of Gungnir (after Odin's death/imprisonment) were actually the real one and not fake (after all, Asgardians love their secrets).

However, assuming that it was the real spear of Odin, was the whereabouts of Gungnir revealed? Looking for all types of answers (in-universe, comments by the writers in interviews etc.)

PS: Not a dupe of this question as it asks about his treasures (like the Eternal Flame, fake Infinity Gauntlet, Tesseract) and not about Odin's spear.

Thor is seen holding Gungnir in Thor: Ragnarok as you state in the question and he uses it in the initial dual against Hela in the Throne Room. You can see the full scene here and the relevant gif is below:

Watch the end of the gif carefully as Hela throws Thor and Gungnir away, she disarms him at the same time and we don't see Gungnir again. Presumably the spear just stayed in the throne room from this point onwards, Thor had no need for it anymore as he had awakened his true power and of course Hela didn't want it so it would have just stayed there.

Presumably it was then destroyed in Ragnarok by Surtur as not much could really have survived that explosion.

But was it the real one? It does seem to be the real one. It appeared to be able to summon Hela to the Throne Room properly and was clearly more than just a spear as we see it glowing in the fight. I think barring any contradictory evidence we can assume that is was indeed Gungnir.

26
Why didn't Thor use the All powerful spear instead of Stormbreaker?
7
What happened to Odin's treasures after Ragnarok destroyed Asgard?

2
Who is the giant wolf Fenris?
12
Where was Hela imprisoned?
8
Was Odin also the reason why Thanos hasn't invaded the Earth?
22
If Mjolnir was made for Thor, why is Hela seen using it in Thor: Ragnarok before it was even given to him?
18
How, if at all, was Thor unaware of Hela?
7
Did Odin know how the events of Ragnarok were going to turn out?
25
How does the Bifrost still work after the destruction of Asgard?
13
Why did Hela need Heimdal's sword?
5
How did Asgard's army travel to Vanaheim in Thor: The Dark World