Did Superman ever attend Sunday School in Smallville?

In the comics, did Clark as a boy ever attend Christian Sunday School (or any religious schooling) growing up? You would think that this would be probable given it's a small town in America, and the amount of Christian imagery juxtaposed over Superman in various media.

I haven't found anything explicit but in Action Comics Issues 848 and 849 Clark has a bit of a battle with faith and in it we get some insight into his early life in Smallville. In Issue 848 we get a few flashbacks to Clark as a child and in some of these we see him going to church. 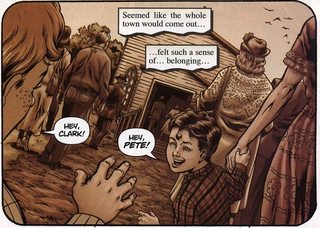 In Issue 849 he stops by Smallville and has a talk with his mum and dad about when he stopped going to the services and mentions he was 14 at the time. 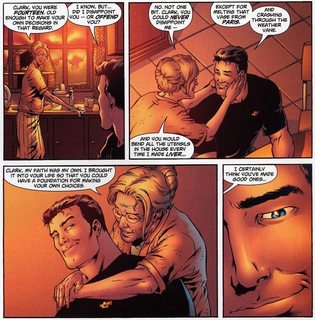 Lastly, to "confirm" what religion Clark actually is/was we have an interview with Elliot S! Maggin, a previously long time writer for DC and Superman comics. In an interview he mentions that Superman is a Methodist.

BB: Do you see Superman as a man who prays and\or worships God regularly? If so, what would the Man of Steel pray about from your perspective?

ES!M: I give all my characters religions. I think I always have. It's part of the backstory. It's part of the process of getting to know a character well enough to write about him or her. Jimmy Olson is Lutheran. Lois is Catholic. Perry is Baptist. Luthor is Jewish (though non-observant, thank heaven). Bruce and Batman are both Episcopalian and I said so in the text though it was edited out erroneously. Clark – like the Kents – is Methodist. Superman is something else, but I never did buy all that Kryptonian "Great Rao" nonsense. I do think Superman essentially adheres to a kind of interplanetary-oriented Kryptonian-based belief system centered on monotheistic philosophy, and I've got some ideas about it that I haven't yet articulated other than as backstory. I think Superman is too humble to ask for things in prayer, but I think he prays by rote, and constantly, the way some of us talk to ourselves in the shower.

I think putting all this together we can assume Clark probably went to Sunday school but we can't say so 100% without any explicit evidence on the matter.

5
Which comic issue does Superman fight someone powered by prayer?