How is a hoverboard powered in Back to The Future?

How is a hoverboard powered? Where is the fuel? How does it detect the kicking action to accelerate at start?

The same way a skateboard is powered, by the person riding it. The "standard" hoverboard like the one that Marty rode (which if you remember was actually a scooter he broke down into a hoverboard), as well as all the others (with the exception of Griff's Pitbull board that had rockets), work just like a regular skateboard. The difference being that instead of wheels it uses two powerful magnets (the flat metallic disks on the bottom roughly where the trucks and wheels on a skateboard would be) In reality this would require an opposing magnetic force to keep the board and rider floating, but that's a different question to answer ("Would a hoverboard really work?")

Side note: Mattel actually did try and make a working hoverboad shortly after Back to the Future II came out, the father of a girl I went to grade school with was on the design team. I think the plan was to use fans on the bottom like a hovercraft but they never got the project... "off the ground" badum tish!

I haven't found an official explanation how Hoverboards work, but according to Futurepedia:

A hoverboard was similar in appearance to a skateboard but underwent a hover conversion. 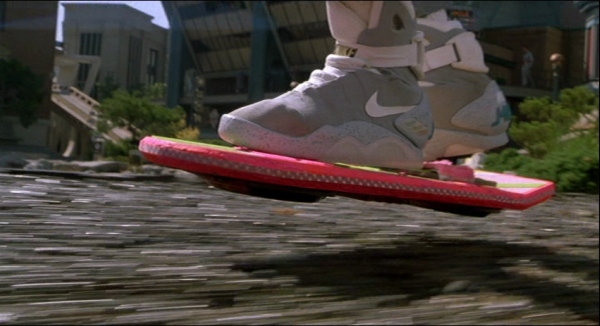 A hover conversion was an application to a ground vehicle to enable it to fly. For the DeLorean time machine ... the hoverwheels would fold down when in flight ... 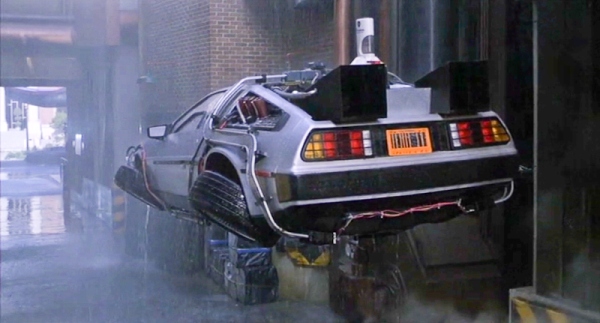 Flying circuits were inserted into the vehicle.

It is unknown if there was another source of lift other than thrust, such as anti-gravity or magnetism. Considering the loads that some vehicles produced, and that thrust was not always applied when a vehicle first lifted up, it is feasible that these alternatives could have been used.

Mattel Will Finally Release The Hoverboard From ‘Back To The Future’

But before you get too excited, remember that just as when Nike released the limited edition sneaker run, they noted that the self-lacing technology wouldn’t be ready until 2015, the same is true with hover technology — its just not quite ready for primetime just yet.

The movie-accurate 1:1 Hoverboard replica will ship for Christmas 2012. 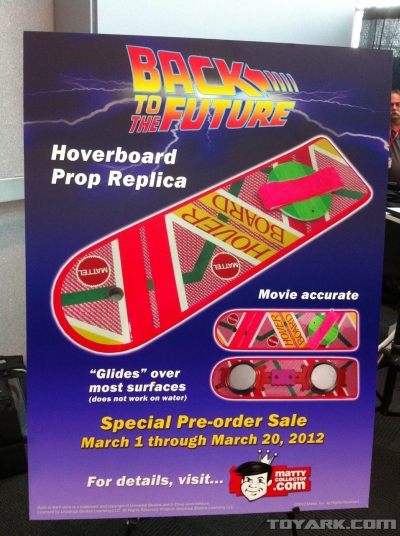 Those magnets are composed as a halbach array.