Looking for this anime or cartoon from the 80s or 90s. I last watched it in around 1999 and it already looked old then. Sci-fi genre with cyberpunk feeling. Has elements of family, coming-of-age, romance, epic conflict. Futuristic and set in space. Often landscapes include gigantic mechanical spheres like planets and domes.

Protagonist and his family are all these robots with elongated heads (almost like egg with pointy side up, faces almost teardrop-shaped) their skin metallic and grey. Protagonist rides on this surfer-board looking mechanical hoverboard at fast speed through gigantic metallic structures.

Overall mystical and deeply dramatic feeling of suffering. Enormous sense of scale both in terms of distances and in terms of the size of the megastructures.

Watched it on mainstream TV, don't remember which channel, but it was broadcast in a Saturday morning segment together with children's cartoons like Grimm's Fairy Tale Classics. It was a TV series. The style was 80s/90s Japanese animation. It was dubbed.

The main protagonist was a male robot, slim and almost fragile looking, not military or Evangelion-like. The size of a human. In love with a female robot of the same race and physical characteristics. Saving the female was a major part of the story. No hair. Only clothing I vaguely remember is a cape.

I think this is a slightly mistaken recollection of Blue, Child of the Earth, an obscure French cartoon from 1986.

It's set in the future, where Blue is a young boy trying to wake up his parents from the artificial coma they've been put in, and undo the "Great Mistake" their ancestors committed ages ago (roughly translated from here). Most notably, as can be seen in the opening below, he has an elongated head and rides a hoverboard between structures similar to what you described. 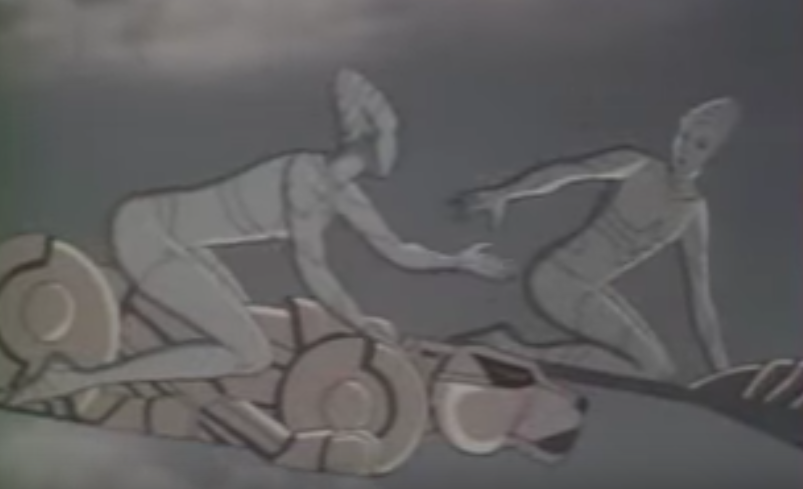 The main difference would be that Blue is blue-skinned​, although his skin appears grey in the opening.

There's also a female in the opening, who travels with Blue. I'm not sure what her role is, but for the "Saving the female was a major part of the story", the French intro song has the line "Blue, fighting to save his mother, and make the sky blue again". The English dub does not have it, though.

Remembered from my own answer to 70's-80's animated series, main character named Blue, who was possibly the last man.

6
Warring aliens transfer mind to transformer like robots in 80s/90s animated movie?
4
Robot anime of the 80s
9
Anime Identification: The protagonist wears a comma shaped locket which can be used to summon a robot or exo suit
9
90s (or earlier) mecha anime: dormant robot chooses a teenager as its pilot, they fight a dog robot and an ostrich robot
7
Anime/cartoon with kids battling with robots in a game
7
Anime/Cartoon with a Giant Police(?) Robot
8
80s 90s psychic powers anime movie
5
Anime with a blue robot protecting a young girl
12
Looking for the name of an anime where the robot head is also an airplane