Old Animation/Anime where the protagonist had red spiky hair [closed]

Ask Question
Asked 10 months ago
Active 10 months ago
Viewed 139 times
-2
Closed. This question needs to be more focused. It is not currently accepting answers.

I am 23 and I remember as a kid (6-10 yo) watching a videotape animation that had some prob kids (?) with superpowers... I remember only that the protagonist had red spiky hair (like a triangle) and that the whole animation was something like a db ripoff. 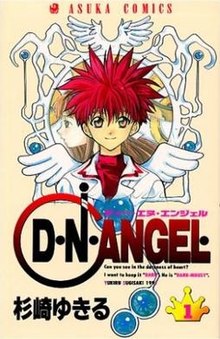 From Official ADV Films website: "This is the story of a 14 year old boy, Daisuke Niwa, who turns into Phantom Thief Dark when he becomes enamored with a certain local girl that he is fond of. Poor little Daisuke is sucked into this tale of thieving, and the only thing that will return his life to normal is to steal the heart of the woman he loves. Too bad that the object of his affections only has eyes for his other, more dangerous self! Daisuke, or as his alter-ego, Dark steals artwork that have some sort of cursed power and cause troubles for the town and its people. Once the works of art are obtained, their power is sealed by him or his family (Daisuke’s grandfather and mother). "

Not the answer you're looking for? Browse other questions tagged story-identification anime animation or ask your own question.