If the liquid metal T-1000 can become anything it touches, why does it choose to be humanoid most of the time? Humans aren't very efficient; is there anything stopping it from becoming some other thing that can shoot more guns at a time and run faster?

As a Terminator its primary mission is infiltration and assassination. While it probably can make itself into a big cat that can run faster, that wouldn’t be very covert. Also, it needs physical contact with things to copy them.

We see it disguise itself as a floor in Judgement Day. 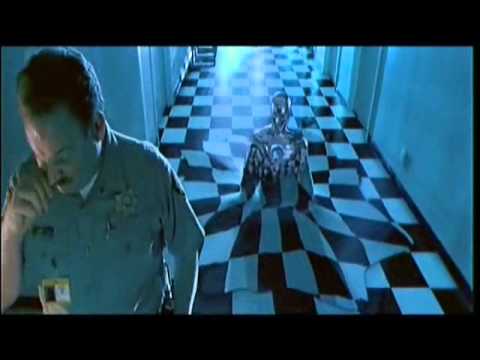 It wanted to stay hidden and then assume the form a guard. And while it is difficult to destroy, it isn't indestructible. Too much attention and the government would try to end it.

The T-1000 has no compunction about being non-humanoid (or at least not possessing the statistically usual number of arms, heads and legs) when it suits its needs.

It also performs superhuman feats such as running at 40mph, melting through walls and pouring itself in through ceilings but in the main it's operating human-scale machinery and weaponry (as well as acting as an infiltration unit) so it's best off emulating a human most of the time.

I would imagine a lot of it has to do with its programming. Don't forget - at the end of the day it is a machine, and therefore governed by its program.

It also comes from the future - so Skynet has a different observable world than the "present day" - which may factor in with the programming.

I would make an assumption that his runtime protocols would range something like this:

Of course this is wild speculation and conjecture.

Terminators are infiltration units - so the less attention they draw to themselves the better.

If I remember correctly, the T-1000 needs to transform into something in "its size" and need to use all its liquid metal.

The out-of-universe answer is, of course, that the T-1000, as a villain, needs a face. The face of Robert Patrick, to be exact. It does take a different form on two occasions, but they're exceptions, and of short duration.
Once, the plot required it, obviously the T-1000 couldn't have killed and impersonated Janelle if it didn't look like her. The other occasion with the fat watchman walking over the checkerboard floor was just, well... CGI show off. Don't forget it's an early 90s movie. CGI was super expensive, super awesome, super... cool. Magic. People watched Star Trek TNG and Black or White only because of the CGI back then. Which, at that time, were not just "OK effects" but stuff nobody could even have imagined as being possible before.

You see the same thing (villain face) in "Matrix" where every agent is Mr. Smith (and the few that arent, at the few, selected occasions, are all Mr. Jones and Mr. Brown). Why do civilians who are taken over by agents need to look like Mr. Smith? Well because Neo getting beaten up by the cat lady, or by a stinking hobo in the subway tunnel isn't nearly as "chic". The hobo doesn't have the face of the villain.

In-universe, the T-1000 is a nigh-invincible war robot, but as we see in the movie, it's not bulletproof, nor indestructible. So, avoiding being shot upon first sight is certainly not against mission parameters.

Plus, it has the concrete assignment of killing one particular person. What's the single best approach to do that? Well... get near the person in the form of a normal, harmless human, and then... just kill her. Oh wait, it was the boy who was to be killed in that movie... never mind, all the same. Kill him.

Pulling off a "I am Megatron, Destroyer of Worlds, bow to me or die!" in the middle of L.A. neither helps avoiding trouble with local authorities, it also significantly reduces the likelihood of civilians being willing to help you find your mark, let alone your mark who knows about murderous robots from the future, staying where he is. Really, there exist better strategies for not alarming everybody and their mother than appearing as an obviously non-human killer robot.

This answer is only within scope of T1 and T2. It's also speculation, but logical. Skynet is afraid to damage the timeline. There is a reason it does not send 100 terminators all over the place. There is a reason it does not try to detonate a nuclear weapon in a city to kill the targets. Skynet is trying to make sure the future that happens is one where it's created.

This means stealth is the most important prerogative of the mission. If the humans figure out there are robots attacking from the future, all AI research would be suspended. Skynet would not exist.

Because of this both the t-800 and t-1000 do their best to remain human. Anyone that sees them as robots must be killed. Doing something crazy like turning into a horse in the middle of the highway violates this prime directive.

In the end, changing the timeline is Skynet's downfall.