Does anybody know any specifics about Torqasm Rao or Torqasm Vo?

These are both mental (as in psychic) and physical martial arts made on Krypton, currently the only two martial disciplines we have any info on from Superman's home world.

One deals most specifically with building psionic control to the point of illusion casting, astral projection, mental construct conjuration and psychic battling.

The other a physical-based martial art that teaches strikes, forms and counters, but also develops control the brain itself to push the practitioner into a Theta Wave state where they are open to instantaneous reaction, intuition, instinct and can even control their autonomic system. 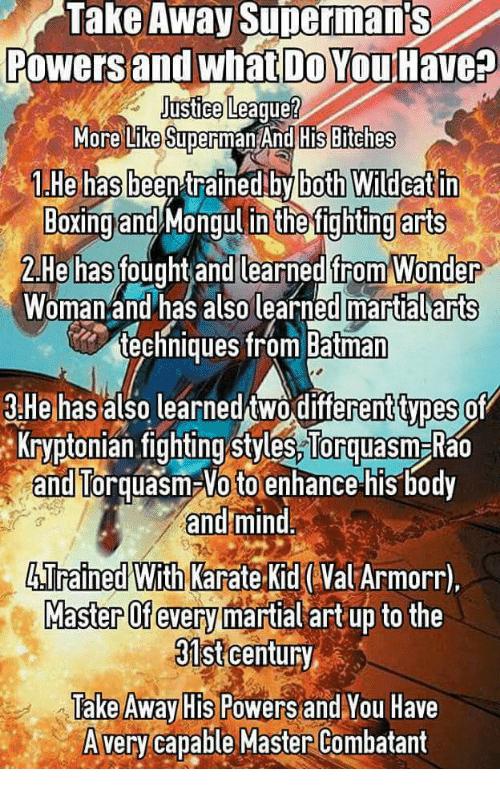 I've not been able to find a lot of instances of their combat applied use, though; was wondering if anyone had further information?

Are there any scans showing the forms being used in combat?

Browse other questions tagged dc superman or ask your own question.

17
Does Lois Lane Know Who Superman Is (In Any Versions or Reboots)?
9
Did Superman ever formally acknowledge any jurisdiction/chain of command?
3
Does non-radioactive debris from Krypton have any effect on Superman?
5
Does Superman have any “normal” academic/professional/military achievements?
2
Do Kryptonians know about the effect of yellow suns and how did they use it?
11
In the DC Universe does Batman know that Clark Kent is Superman?
22
How does Lex Luthor know Superman's identity?
12
Does Batman know he's Superman's boss since he owns the Daily Planet?