Parallel universe where an engineered bacterium consumes all petroleum

I kinda of remember a sci fi tv show where the group traveled between parallel earths. The one episode I remember is where they ended up on an Earth where a scientist created a bacterium that consumed petroleum to clean up the oil spill of the Exxon Valdez. The bacteria got out of control and spread over the entire earth. They destroyed all petroleum products including plastics. Does anyone remember the show?

The question snippet matches with practically the only thing I remember about the 1993 made for TV movie Doorways. 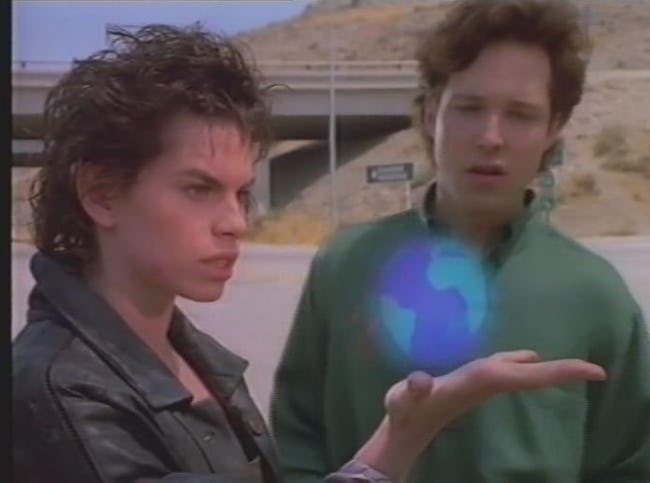 Cat, a fugitive from a parallel Earth ruled by aliens, lands on "our" Earth in the middle of a freeway, causing an accident. She is slightly injured, and wakes up in the emergency room of a hospital, where Thomas, a doctor, takes care of her. The following day, Thomas goes back to the hospital and finds Cat's room vacant and all records wiped out. He discovers that the FBI is investigating Cat's origin, because she has brought a couple of strange artifacts.

Thomas is trying to talk to her when she decides to escape. Thomas is forced by the events to follow and help her, all the while trying to understand her motives. It turns out that Cat is fleeing a group of servants of the Dark Lord. They hitch-hike to the nearest Doorway to another parallel world, but while they're waiting for the door to open, they're caught successively by FBI agents and Dark Lord goons.

They barely escape through the door to an Earth where petrol has disappeared. Their adventures continue as they are still chased by the villains. At last, they stumble through another door and land on top of Mt Rushmore. But the four faces that are sculpted on it show that Thomas is clearly not back home yet.

The Doorways themselves seem to be mapped "softspots" between Earths rather than something mechanically (or magically) opened by people or devices.

The scene mentioned in the question begins when the Hero follows the Girl through one of the Doorways (I think the doorway is in a tree) and lands on his first (or possibly second) parallel earth. He beings hitch-hiking down the road and is picked up by a horse pulled caravan. The driver asks him what he's doing out here and the Hero responds that he "ran out of gas", which causes the driver to laugh and respond with "yeah about 15 years ago". The oil spill guzzling bacteria then comes up in the following conversation.

Apparently the whole film is available on YouTube. Here's the scene in question. Out of Gas

It sounds a lot like Sliders. The show aired on Fox and SyFy between 1995 and 2000, and followed a group of people lost on alternate versions of earth, trying to find their way home, through the use of wormholes between universes.

The show follows a group of people who travel ("slide") between different Earths in parallel universes via a vortex-like wormhole, hoping to return safely to their original Earth Prime. The vortex can only be opened after a specific but random period of time on each new universe, monitored by a countdown clock on a portable timer that they carry; failure to open the vortex in time would strand the Sliders for 29.7 years in that universe. While waiting for the timer countdown, the group learns about the differences in the alternate Earth from their own, and often become unwillingly involved in events that they must resolve before they can safely leave via the vortex. The travelers have no control over what world they end up in, but continually look for means to find Earth Prime.

I cannot find any evidence of this particular episode though, with a preliminary search of the episode list.

Not the answer you're looking for? Browse other questions tagged story-identification tv parallel-universe or ask your own question.