Has Batman ever unintentionally/accidentally killed someone?

Batman is known for his "code" of not killing as he never wants to cross that line. Although he is completely okay with killing mindless aliens (in the comics, animated series and movies as well), he refrains from taking a human life.

In the main continuity however, Batman has committed murder quite a few times.

Batman actually started out in the first comics carrying a gun and regularly killing criminals by shooting them, strangling them, knocking them off buildings, into pits, etc. (some of his murders are listed here). Also, he killed The Joker in Frank Miller's very famous The Dark Knight Returns.

On screen, Nolan's The Dark Knight ended with Batman killing Harvey Dent/Two-Face. In Batman v. Superman: Dawn of Justice he does try to kill Superman (although "Martha" saves the day, Batman's intention of killing Superman was very clear). Moreover, if we count alternate timelines and variations of Batman across the multiverse (and Dark-multiverse), this list could go on forever.

However, all of these acts were intentional. But are there any instances where Batman has accidentally killed someone? Could be anything, in a fit of rage, accidentally throwing a Batarang at a wrong target etc.

In Detective Comics Issue 613 Batman kicks a thug into someone else and they both fall into the grinder on the back of a garbage truck. From his reaction it is pretty clear that he didn't mean to do this. 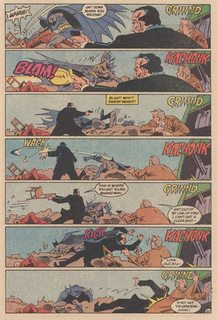 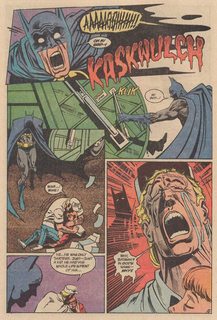 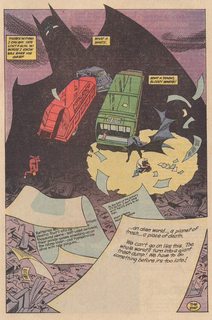 Batman's very first appearance in Detective Comics #27 features what appears to be an accidental killing (although he certainly isn't remorseful). 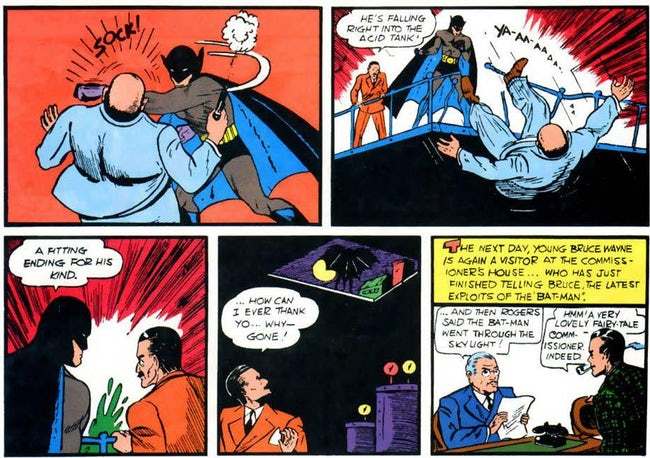 In the campy 1966 movie Batman, Batman and Robin find themselves in the Batcave faced with henchmen of the Joker and/or Penguin, after the Penguin (whom B&R have brought into the Batcave for some reason)

puts some dehydrated henchmen on the floor and reconstitutes them from some water available. This backfires on the Penguin, because in the ensuing fight, as soon as Batman or Robin strikes a henchman, the latter suddenly disintegrates forever.

Batman and Robin didn't mean to kill those henchmen, but they certainly did!

Batman later figures out that

the Pengiun used heavy water from the Batcave's nuclear reactor, and this interacted with the dehydration process to make the henchmen's atoms out of antimatter.

This is, of course, the same movie where the One True Batman runs around holding a bomb over his head, trying to get rid of it, but won't throw it in the harbor because of the baby ducks swimming there.

While Batman won't kill deliberately. Dying by the byproduct of their own incompetence or actions is a circumstance that has cropped up in comics.

Unintentional Murder Batman? But of course (the other two mentioned in the piece are covered by Lethal Carrot):

After reviewing the evidence, we can pretty confidently say that Batman is the superhero who holds the record for "accidentally" crushing the most folks to death in junkyards, an oddly specific scenario that so far has taken the lives of three Gotham City residents (that we know of).

The first instance comes in Batman No. 425 from 1988, where the Caped Crusader fights a pissed-off drug dealer seeking revenge after Robin intentionally dropped his brother off a rooftop (we wonder where he learned that trick). After thoroughly lecturing Robin about the sanctity of life, Bat-Hypocrite ends up being chased through a junkyard by the drug dealer and somehow toppling a huge pile of unwanted cars on his ass.

Batman accidentally kills The Joker in the end scene of the game Arkham City.

8
Was the coverup of the fall of Harvey Dent from the comics?
33
In the Dark Knight, why did Batman choose to save Harvey Dent, rather than Rachel Dawes?
27
Did the Joker mislead Batman, or was the Joker himself ignorant of the facts?
6
Has Superman ever had an army?
12
Do people in Gotham know that Batman doesn't kill?
16
In the comics is Two-face's coin a regular coin?
10
Should I start reading batman from the start or from the new 52?
7
Why is The Dark Knight Rises set after 8 years of The Dark Knight?
9
Was there a comic where Batman and Robin were attached to a giant piano?
19
Has either Batman's or Superman's identity been accidentally revealed by someone in the comics?