What happened to Hermione's wand after that it was confiscated?

Hermione's wand was confiscated by Snatchers in the spring of 1998 when she, Harry, and Ron were caught after Harry accidentally broke the Taboo curse by saying Voldemort's name. Hermione subsequently used Bellatrix Lestrange's 12¾" walnut and dragon heartstring wand, which Harry grabbed during their escape from Malfoy Manor.

What happened to Hermione's wand? Did she get it back?

It's not stated in the book or any other media that I know of.

She of course would not keep using Bellatrix's (she is disgusted by it and she is not the master of that wand).

The obvious answer is, in my opinion, that the Ministry raided Malfoy Manor after the war, and recovered the stolen wands.

And what if the wands were destroyed? I don't think the Death Eaters would destroy useful wands, but she was considered a mudblood so that's a possibility. In that case, Hermione would have simply bought a new wand at Ollivanders.

Luna also lost her original wand and got a new one from Ollivander. Hermione says in Deathly Hallows that she wishes he made another one for her.

“I miss my wand,” Hermione said miserably. “I wish Mr. Ollivander could have made me another one too.”

Mr. Ollivander had sent Luna a new wand that morning. She was out on the back lawn at that moment, testing its capabilities in the late afternoon sun. Dean, who had lost his wand to the Snatchers, was watching rather gloomily.

We also don't know if Luna recovered the original or kept using the second.

It appears that she didn't get it back, or if she did, for some reason (it got broken or lost, perhaps) she stopped using it by the time the events of Cursed Child take place.

Her wand in the play is significantly different, both in design and wood type. 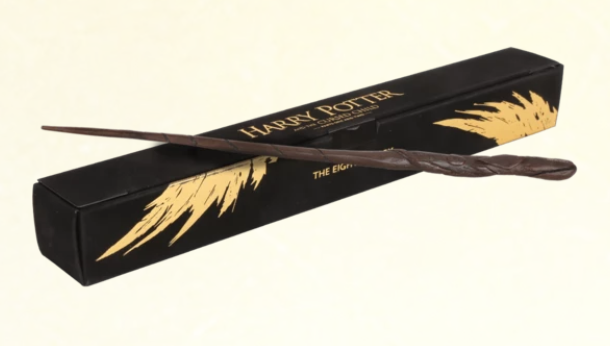 49
Did Draco Malfoy Demonstrate Any Level of Redemption By the End of the HP Series?
13
When did Voldemort lift the Taboo spell?
10
How can Ollivander tell a wand has changed allegiance?
23
Why didn't Harry and his friends disapparate when the Snatchers came?
31
Whose wand did Bellatrix use at the Battle of Hogwarts?
5
Why did Voldemort visit Grindelwald?
10
Did Hermione Granger's front teeth grow back to their old size due to Gringotts' Thief's Downfall?
4
Why was Molly still wearing her cloak?
21
Is there any reference to which wand Ron uses after the Battle of Hogwarts?
1
Is Ron Weasley the master of Bellatrix Lestrange's first wand?