I need to find a film that I watched when I was a kid in 2000-2004 (don't remember the exact time). I remember the film about a person telling a story to his kids.

The story is about the fight between the human race with an alien species (which had something like coral attach to their head). The human race is almost annihilated. They lost every fight but keep fighting to the last man. But the alien stop the attack (don't remember why) and the humans build something like a satellite.

Some others thing I remember but not sure:

The spaceships of the Shadows (an alien race) kind of have lots of leg-like appendages:

The story is about the fight between the human race with an alien species,The human race is almost annihilated. They lost every fight but keep fighting to the last man. But the alien stop the attack..

Part of the back story to the show is that the humans had been in a war with an alien race, the Minbari. The Minbari nearly wipe out the humans but call off the war at the last moment. 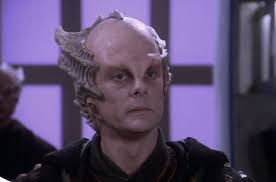 At the start of the series the humans have just built the eponymous space station "Babylon 5": 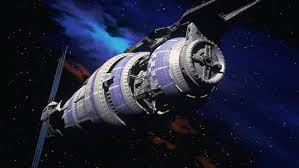 This other answer is correct. I also immediately thought of the television series Babylon 5 (1993-1999).

But the question includes:

I need to find a film that I watched when I was a kid in 2000-2004 (don't remember the exact time). I remember the film about a person telling a story to his kids.

So someoneuseless remembers seeing a specific movie or a specific single episode where someone tells children the story of the the Human-Mimbari War. And I think that if they watched the television series they would have remembered the details much more clearly.

Thus it is my guess that they remember seeing either the first broadcast or a later one of the television movie Babylon 5: In the Beginning (January 4, 1998).

The synopsis in the Wikipedia article says:

...In 2278, Centauri Prime is in flames. A man surveys the destruction from a window of the Royal Palace. Two children, Luc and Lyssa, are later seen playing in the throne room and looking out the window. Their governess finds them and tells them that it is the Emperor's window and that only he can look out from it. The Emperor hears them and tells them to come in front of him. The Emperor is an aged Londo Mollari. Mollari allows Luc to be Emperor of the Centauri Republic for five minutes, during which time he may give any order he wishes. Luc asks for a story of great battles and heroes and villains. Lyssa wants to hear a true story. Mollari decides to give them both what they want and tell them the story of the Earth–Minbari War that took place 35 years prior while he was ambassador to Earth...

So the story teller is not telling it to his own children, although he might be acquainted with them if they are high ranking enough to be allowed to play in the imperial palace. By the way, the Centauri characters in this frame story are not human, they just happen by chance to look a lot of humans - though one episode of the series suggests that Centauri look a lot less human without their clothes.

And Mollari tells the kids the story of the Earth-Mimbari War which includes all the details which someoneuseless included in their question.

And thus it is my guess that someoneuseless remembers watching Babylon 5: In the Beginning.

And if they are interested in watching Babylon 5, one of the greatest science fiction shows of all time, maybe someone could point them to some discussion of the proper order to watch the various Babylon 5 episodes and TV movies.

Maybe it is G.O.R.A. Aliens kidnap humankind and enslave them. G.O.R.A is the name of the planet where aliens came from. You can reach it from here G.O.R.A.

4
Sci-fi story where a pilot transfers his consciousness into his ship and explores the territory of an "enemy" alien race
11
Short story ending with human chased by huge, tripedal, spinning sentient worm alien
85
Short story where human explorers accidentally blind an alien race
19
Short story where both radiation and "demons" travel in straight lines so put bends in the entryway
5
A (possibly TV) movie about a squad that goes back in time from an uninhabitable Earth to 20th century to rewrite history
5
Two human factions land on alien planet, learn the language/culture of radially symmetric native species