Can hybrid Vulcan/Humans procreate, or are they like mules?

Like full blooded Vulcans, the hybrid Spock is driven by the urges brought on by pon farr. Can hybrid Vulcan/Humans reproduce, or are they like horse/donkey hybrids on Earth, physically willing, but biologicaly unable to create offspring?

In the Star Trek novel "Yesterday's Son", Spock discovers that he fathered a son with Zarabeth when he was stranded in the past in the 'All our yesterdays' episode. So a male hybrid produced by a Vulcan male / Human female can be fertile with humans.

No limitations have been mentioned for hybrids. There are some canon cases of hybrids having offspring:

In The Drumhead, crewman Simon Tarses is put on trial and suspected of having falsified his origins as 1/4 Vulcan, when he is in fact 1/4 Romulan (to which he pleads the fifth seventh). Since we know that Romulans are an offshoot species of Vulcans, odds are that their genetics are relatively similar for reproduction.

Crewman Daniels was also of multiple origins, one of which was Vulcan, suggesting that interbreeding is quite extended by the 31st century.

In the non-canon part, a few lines were dropped from Star Trek IV where it would have been revealed that on the Genesis planet (in III), Saavik had had sex with Spock (since he was going through a few instances of pon farr thanks to the accelerated aging), and later took a maternity leave.

Kirk's son with a Romulan/Klingon in the book universe was sterile. They hint that one biology is dominant. Spock is never called a human and B'elanna is always called a Klingon or hybrid.

So, unlike a mule, which is a blend, Star Trek humanoid hybrids seem to be more like a phenotype than true hybrids.

In the Star Trek novel "Yesterday's Son", it's revealed that Spock and Zarabeth (seen in the TOS episode All Our Yesterdays) had a child named Zar.

"The starship Enterprise must protect the Guardian – or destroy it. But Spock has already used the portal to journey to the past. On the planet Sarpeidon, 5,000 years ago, Spock knew a beautiful, primitive woman. Now he has gone back to meet his son!"

The cover even sports a picture of the boy in question: 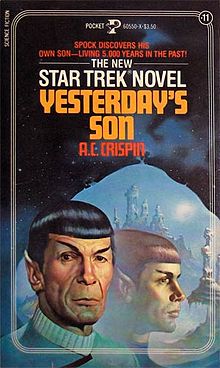 Not the answer you're looking for? Browse other questions tagged star-trek vulcan hybrid or ask your own question.

4
Can Spock even have children?
24
How does cross-species (Klingon/Human, Vulcan/Human) breeding work genetically in Star Trek?

20
Why is Spock's blood copper based if he is half human?
13
Are Mintakans related to Vulcans?
3
Why is it logical to live long and prosper?
9
Pon Farr in the new timeline
13
Does Spock's appearance reflect the fact that he is only half-Vulcan?
3
Are there the equivalent of chimpanzees, etc. on other worlds with humanoids?