Why don't Wizards use wrist straps to protect against disarming charms?

me: see the wrist strap stops you from dropping the wiimote

voldemort: this is brilliant

I know this is just a joke tweet, but it feels like a wrist strap like that could really provide the benefit of being protected against Expelliarmus casts. Is there an explanation (no matter whether in-universe or out-of-universe) why wizards don't use something like this? A reply to the tweet mentioned that the Wii wasn't yet around in the 90s, but I very much doubt the Wii was the first time a wrist strap was used to protect against flying handheld objects.

In the duel between Snape and Lockhart, Snape's Expelliarmus is so powerful it sends Lockhart himself flying. Imagine what the strap would do to your hand should it be attached.

Both of them swung their wands above their heads and pointed them at their opponent; Snape cried: “Expelliarmus!” There was a dazzling flash of scarlet light and Lockhart was blasted off his feet: He flew backward off the stage, smashed into the wall, and slid down it to sprawl on the floor.

Harry Potter and the Chamber of Secrets, Chapter 11, "The Duelling Club"

Even a normal successful Disarming Charm is usually described as sending the wand high into the air. For example,

“Expelliarmus.” Harry yelled, pointing his own wand at Pettigrew; Lupin’s wand flew high into the air and out of sight. “Stay where you are!” Harry shouted, running forward.

Harry Potter and the Prisoner of Azkaban, Chapter 20, "The Dementor's Kiss"

So in conclusion it seems like the wand would leave the hand at quite a speed and that is sure to do some damage to your arm/hand should you be wearing a strap. Even if that doesn't happen you can even be knocked off your feet and sent flying yourself at the same time which the strap doesn't protect against. Snape himself was even knocked out by the Disarming Charm from flying into a wall, though he did have 3 cast on him at once.

“Expelliarmus!” he yelled — except that his wasn’t the only voice that shouted. There was a blast that made the door rattle on its hinges; Snape was lifted off his feet and slammed into the wall, then slid down it to the floor, a trickle of blood oozing from under his hair. He had been knocked out.

Harry looked around. Both Ron and Hermione had tried to disarm Snape at exactly the same moment. Snape’s wand soared in a high arc and landed on the bed next to Crookshanks.

Harry Potter and the Prisoner of Azkaban, Chapter 19, "The Servant of Lord Voldemort"

There are many potential reasons for this, but I think the biggest ones are mainly psychological.

Do you wear those cords to hold your glasses? Why not? Any older person might tell you they're super useful. 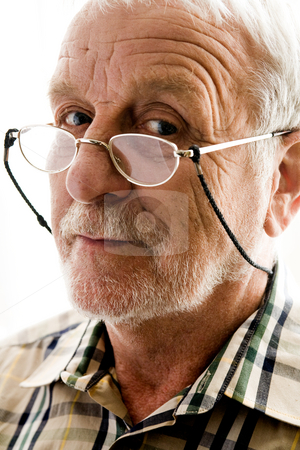 I suspect there's something similar here.

Moving on, that's just not how wizards think. Many very simple mechanical devices in use in the muggle world completely puzzle wizards, simply because a wizard has become conditioned to trust magic first. It's not in the mind of a wizard to use a device (ugh!) to hold a wand to their wrist. They might use some magical charm, but if they did, we wouldn't see it, or we wouldn't know it when we did. And this could easily explain why a disarming spell seems to throw people around from time-to-time... it's interacting with their wand protection charms.

But I don't think people went around every day expecting someone to jump out from behind a bush yelling, "Expelliarmus!" Voldemort and his followers use far worse things when they come for you. Really, I have the impression hardly anyone used it outside of sport dueling, until Harry — being something of a celebrity — popularized it. Thus, it's not something one would normally think about much at all, let alone take the fore-sight to prepare for. Even Voldemort's followers, in preparing for the Battle of Hogwarts and aware of Harry's tendancies, are likely more concerned with worse curses that directly attack them physically: Stupefy, body/leg-binding, etc.

Inasmuch as the wizarding world has a military, I wouldn't be surprised to find some kind of device in use. If things had become worse, more people might have adopted something along these lines. But part of the story is Voldemort deliberately avoided real military-style assaults before the Battle of Hogwarts. Rather he worked covertly, taking power behind-the-scenes to avoid that kind of direct confrontation. The battle was to be sort of his coming-out party. Even at the point where our heroes find themselves about to enter combat, these devices may not have been ready to hand and of little use against opponents willing to throw out Avada Kedavera at the drop of a hat.

One must also remember the nature of wands, that they have some will of their own. It's conceivable use of such a device would in some way also magically bind the wand in a way that limits the wand's utility.

There is also the concern magic is, well, magical. Could a purely physical device acting in this capacity hold up, or would it be easily undone by the magic? You could, perhaps, magically protect such a device, but again it seems like the point of Expelliarmus is to get past that kind of protection.

It's only of limited help

If you strap your wand to your wrist, Expelliarmus will still get the wand out of your grip. Even if it does not injure you or totally rip whatever you use to attach the wand in pieces, you will still be disarmed for a short time. Sure, you can more quickly get a hold of your wand again, but that will likely still take long enough for the other wizard to realize his mistake and send a Stupefy right after.

We experience the books through the eyes of Harry, who has a very pacifistic fighting style in that Expelliarmus is his favourite fighting spell. There are a lot of other curses. In most fights anyone else than Harry seems to rather use any of those other spells. Even aurors tend to go for Stupefy first and ask questions later if they deem their opponent dangerous (see the Quidditch world cup for example).

There are magical ways to safely block Expelliarmus completely and other spells of similar level at the same time.

So it simply doesn't make sense to specifically protect against such a rare spell. In particular since the protection can be a nuisance or hindrance.

Expelliarmus disarms you, no matter what barriers are in the way, using however much force is necessary. If you wore a wrist strap, either it would break or it would rip your hand clean off.

Most instances where a Disarming Charm would be used are not pre-planned. It would probably occur in a spur-of-the moment duel. Given that wizards do not hold onto their wands at all times (they stash them in their robes or pockets), when confronted with such a situation they barely have time to draw their own wands and cast their first spell, let alone have time to put on a wrist strap. Take the duel of Harry and Malfoy in Chapter Twenty-Four of Half-Blood Prince for example:

Malfoy wheeled round, drawing his wand. Instinctively, Harry pulled out his own. Malfoy’s hex missed Harry by inches, shattering the lamp on the wall beside him; Harry threw himself sideways, thought Levicorpus! and flicked his wand, but Malfoy blocked the jinx and raised his wand for another –

Everything is happening in a matter of seconds. Putting on a wrist strap in such a situation would be an unwise allocation of scarce resources. A quick first strike can often end the duel right there; giving up that opportunity in order to put on a wrist strap which might not even work – and if it did work would only help against a Disarming Charm (which is not often used in serious combat) – seems foolish. And be the time you finish putting on the wrist strap you might already be dead or otherwise incapacitated – perhaps even disarmed.

In short, a wrist strap would seem to provide a minor benefit at best, with a high cost. It’s simply not worth it.

Since there's no canonical answer, we can look at what the spell does. What is its purpose:

Latin expellere (ex = out, pellere = to drive), meaning "to drive out" and "arma" meaning "weapon". Expelliarmus actually means 'to drive out the weapon'. ref

The spell's purpose is to drive away a weapon. Since nobody bothers with straps and it is safe to think someone might've tried it at one point or another, we can reach two conclusions:

All other replies are good here. I just want to add a practical note: Wizards (and witches) may use their wands, but they don't use them every moment of the day. Ordinarily, wands will be kept in handy pockets and only drawn out when used. Adding a wrist strap means that when a wizard/witch uses that wand, they must choose between:

One might also wonder if having a strap might interfere with the magic. Would the wand still 'choose the wizard' if it knew the wizard expected it to be tied down?

382
Why don't Muggle-born wizards use Muggle technology to fight Death Eaters?
11
Why not use the shield spells to protect against bludgers when playing Quidditch?
15
How did the Ministry protect against the use of unauthorized portkeys?
5
Why don't wizards use magic for domestic tasks?
19
Do Goblins and Elves use different spells and charms than witches and wizards?
9
Why don't wizards use a greater variety of spells when duelling?
11
How do wizards protect themselves from memory charms?