I’ve been searching for a long time now and I am not able to find the right cartoon. I remember a SciFi cartoon series where a bunch of humans travel with their spaceship and find a planet where dinosaurs are still alive.

I found Dino Adventure Jurassic Tripper so far and I'm pretty sure that it was a spaceship and not a normal ship. Also I think it is more realistically drawn.

Edit: Long time is about 20 years ago and I found in on a special German tv channel. It was in German, but it wasn't a German show. It looked like a series from the 80s or 90s. As SQB suggested it is not Dino-Riders and it was a more subtle approach - so it was not over the top with armored dinosaurs or something. Just a few humans "stranded" in a tropical enviroment discovering dinosaurs and defending themselves against the threat of being eaten.

Edit: OP has indicated that this is not what they're looking for.

Could it have been Dino-Riders?

The Valorians (superhumans) and the Rulons (humanoids) fight each other on a pre-historic earth, with the help of technologically augmented dinosaurs.

It was a short lived TV series that was aired first in the late '80s. 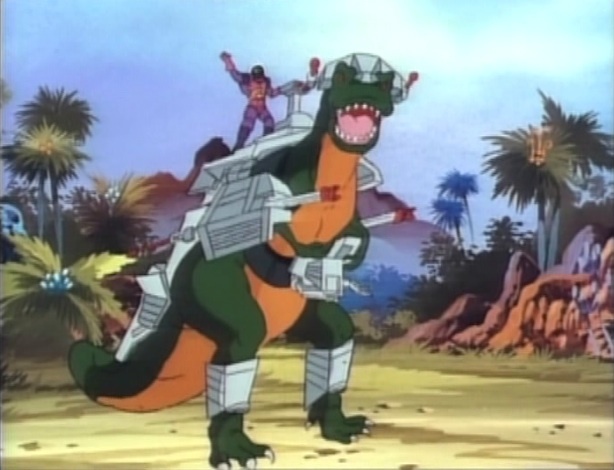 4
Old anime/cartoon where a spaceship turns humans evil
8
Help identify story: Man stranded on Mars, romances alien, ends in tragedy
8
Comic book set in futuristic setting with reptilian humanoids
11
Cartoon TV show with a group of dinosaurs
5
Cartoon in the late 80's early 90's about dinosaurs with armour on
11
Cartoon with a duck and pig travelling around in a spaceship
20
crustacean planet settled by humans who export drugs by FTL travel; alien society divided into castes