How did Superman get his electrical powers in Superman Blue?

I just read the Superman Blue volume 1 trade paperback (collecting Superman #122-125, Adventures of Superman #545-547, Action Comics #732-734, Superman: The Man of Steel #67-69, and Superman Annual #9, published April 1997 through July 1997). In it, Superman loses his traditional powers and gets new electricity-themed powers (and when he switches them off and becomes Clark Kent, he is as vulnerable as any human). 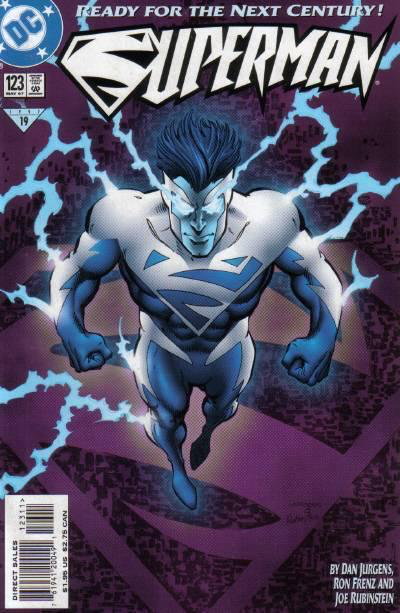 Throughout the comic series, Superman seems largely uninterested in why he got these powers. The only reference we get is in The Adventures of Superman #547 where Superman, having no crisis to deal with that day, asks Professor Hamilton about their origins.

Hamilton: So -- what brings you to my humble laboratory?

Superman: Well, I hoped you could help me find out where these powers came from…what triggered the change…

Hamilton: Ah! As it happens, I've already made some notes on that topic! They're on my desk somewhere…

Unfortunately, the two get distracted and we never do find out (in these collected comics anyway) what the origin of his powers were.

I tried reading up on Wikipedia and other online sources, but it didn't seem to answer this question. How and why did Superman get his electricity-themed powers in the first place?

That's an interesting question, because it led me to do some search and discover that what many consider the obvious reason -and I did too for many years- for many others is not even taken into consideration. And, I've not been able to find any kind of official answer too. Anyway...here I have to go by memory because I don't have the comics at hand reach.

The source of his new power seems to be implied as to be an accident involving the bottled city of Kandor. My recollection goes this way:

To me that was quite an obvious timeline.

12
Where did Superman get his boots?
5
How did Goldrush get her powers?
8
Lock Superman Underground, how long till he loses his powers?
16
How did the Kents raise a super-baby?
4
Are the different Superman comic series linked?
8
Even with his powers, doesn't Superman train and work out?