Did Green Arrow ever acknowledge Batman as a "role model"

Way back when Green Arrow was created, DC was basically looking to create a "second Batman". So they made Oliver Queen a billionaire, gave him a boy sidekick, gave him an Arrow-car, etc, etc.

My question is: Was there ever an "in-universe" acknowledgement by Green Arrow of how much he basically followed the "Batman model" in his crime-fighting career? Pre-crisis, post-crisis, whenever.

There was an acknowledgement of the situation by Batman, at least. This was quite a bit later than I originally thought, in the 2001 Green Arrow: Quiver series.* When the topics of the erstwhile Arrow-Plane and Arrow-Cave come up in conversation between the two superheroes, Batman says: "Good Lord—did you ever have an original thought back then?" (As you can see, Oliver looks a bit annoyed by the question.) 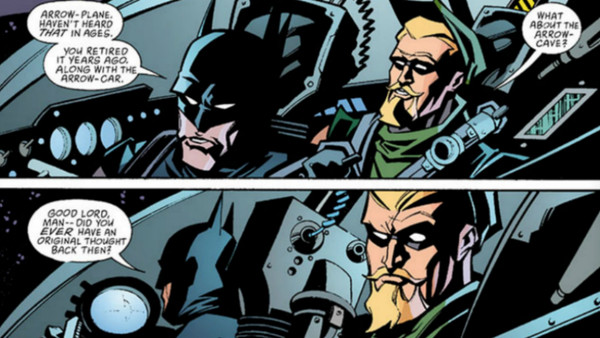 The issue may also have been discussed when the characters crossed over for the first time, in the 1940s or 1950s. Unlike the first Batman-Superman crossover in Superman no. 76, early Batman-Green Arrow crossovers were not extensively reprinted.

According to Wikipedia, the similarity between the heroes in Green Arrow's earliest days was practically comical:

He retooled the concept into a superhero archer with obvious Batman influences. These include Green Arrow's sidekick Speedy, his use of an Arrowcar and Arrow-Plane for transportation, his use of an Arrow-Cave as his headquarters, his alter ego as a wealthy playboy, the use of an Arrow-Signal to summon him, as well as a clown-like arch foe named Bull's Eye, similar to Batman's arch-foe, the Joker.

*Thanks to FuzzyBoots for locating this.

Not the answer you're looking for? Browse other questions tagged dc comics batman green-arrow or ask your own question.

16
Where do Green Arrow and Hawkeye get their arrows?
30
What are the differences between Hawkeye and Green Arrow?
6
Did Green Lantern ever have a 'Robin'
19
Why does Green Arrow hate Batman?
8
Even with his powers, doesn't Superman train and work out?
1
How did Green Arrow find and access Prometheus' lair?
2
Has the Green Arrow gone on a different planet?