What is the bio-hazard with an eye symbol on Moody's pocket watch?

In the film version of Harry Potter and the Goblet of Fire we see Moody with a pocket watch that he uses several times. 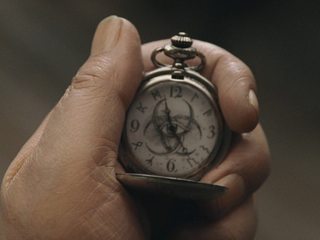 It has a bio-hazard like symbol with an eye in the middle and a sort of shading in the background? What is this?

There are also runes around the outside but I'd imagine these are just numbers considering their placement. 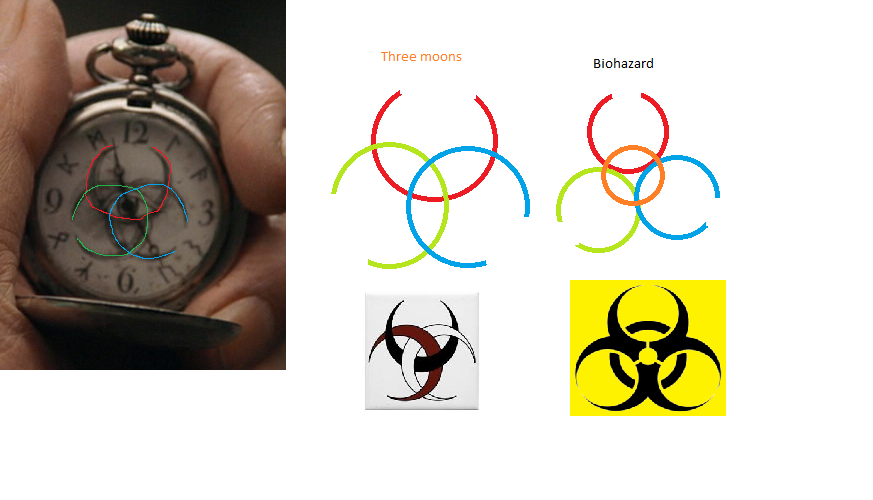 An eye in the middle of a symbol is in almost cases referred by as "all seeing eye". This is a symbol of early Christian, to show the eye of God, watching over humanity (Wikipedia "Eye of Providence")

If I assume the background are three moons with points of intersection (see the picture), then this three are the symbol of "Triple Crescent Moon". Like this website wrote: a symbol for three stages of women life, or in general three fates (birth, life and death). And it should be the opposite to the horned god.

Strange thing: If one search for pictures with "symbol triple crescent moons" one gets some of biohazard as jewelry too...

So it is not the biohazard symbol, but the similarity is intended I assume, to illustrate the role of Moody as an Auror, who watch over the "normal" people (magic and non magic) to find the evil and guard them against it. "Magic-hazard", if you want to call it that.

Based on these real-world background facts, I assumed that the symbol was Mad-Eye Moody's personal emblem. It is thematically appropriate, with an eye appearing in a (close approximation of a) biohazard symbol—metaphorically indicating that his "mad" eye is dangerous on its own. It is also vaguely suggestive of the masonic eye emblems that masonic lodge members sometimes incorporated into their personal crests.

Not the answer you're looking for? Browse other questions tagged harry-potter object-identification or ask your own question.

51
Could Mad-Eye Moody See the Natural State of a Boggart With His Magical Eye?
13
Was Mad-Eye Moody's Recumbent Broom a Help or Hindrance In the Battle of the Seven Potters?
38
What is the house hourglass of Hufflepuff filled with?
16
How could a memory (Tom Riddle) have performed Avada Kedavra?
61
What exactly about Aunt Petunia is "More than meets the eye"?
9
What class is the starship with angled nacelles in the Second Battle of Chin'toka?
43
What were Mad-Eye and Neville talking about after the Unforgivable Curses scene?
79
Why did "Moody" suggest to Harry that he should consider becoming an Auror?
4
What was written in the book Sam was reading with the Valyrian steel dagger?
5
What is the secret behind Mad-eye Moody's eye?