What is the origin of the “clerics can create water” trope?

All Dungeons and Dragons edition I'm familiar with have its Cleric character class. Apparently, D&D Cleric is a trope of its own.

Many D&D "clerical" spells were still inspired by popular fantasy tropes, like priests' blessings and healing hands. However, the Create Water spell seems to stand out, in that it seems less archetypal associated with its class (clerics/priests) than the others.

The "Create Water" spell is now widespread in other media, like games and anime: 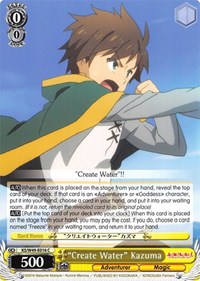 It is neither a rainmaking ritual, nor a divination ability that helps to find water. It is an ability to make water appear out of nothing, and it's clerical for some reason. I can't remember any older fantasy book or movie where clerics actually do that.

Does the idea of priests/clerics having a water-creation ability exist in any earlier source (including mythology and religious texts), or is it an original D&D invention, like the Cleric class itself?

A lot of cleric spells in early D&D were explicit Bible references; the one that comes immediately to mind is Sticks to Snakes, which is based on Exodus 7:12 (thanks to @RossThompson for this catch).

It's possible that Create Water spell originates in the Old Testament (which comes from Torah). In the Book of Numbers, Moses, who was the people's spiritual leader, got water from a rock.

20 In the first month the whole Israelite community arrived at the Desert of Zin, and they stayed at Kadesh. There Miriam died and was buried.

2 Now there was no water for the community, and the people gathered in opposition to Moses and Aaron. 3 They quarreled with Moses and said, “If only we had died when our brothers fell dead before the Lord! 4 Why did you bring the Lord’s community into this wilderness, that we and our livestock should die here? 5 Why did you bring us up out of Egypt to this terrible place? It has no grain or figs, grapevines or pomegranates. And there is no water to drink!”

6 Moses and Aaron went from the assembly to the entrance to the tent of meeting and fell facedown, and the glory of the Lord appeared to them. 7 The Lord said to Moses, 8 “Take the staff, and you and your brother Aaron gather the assembly together. Speak to that rock before their eyes and it will pour out its water. You will bring water out of the rock for the community so they and their livestock can drink.”

9 So Moses took the staff from the Lord’s presence, just as he commanded him. 10 He and Aaron gathered the assembly together in front of the rock and Moses said to them, “Listen, you rebels, must we bring you water out of this rock?” 11 Then Moses raised his arm and struck the rock twice with his staff. Water gushed out, and the community and their livestock drank.

Not the answer you're looking for? Browse other questions tagged history-of fantasy-genre trope dungeons-and-dragons or ask your own question.

9
Where Did the "Pinocchio" trope of Bringing Your Creation To Life Start?
11
Origin of "giveaway eyes for shapeshifters" trope
2
Origin / History of the "Small crew & beat up starship" trope
7
When was the fantasy trope of psychological invisibility first used?
7
Was the trident (named Wave) in the AD&D "White Plume Mountain" adventure a reference to anything specific?
54
What is the origin of the "being immortal sucks" trope?
25
What was the earliest depiction of the angel/devil on your shoulder trope?
36
Where does the "aging backwards" trope originate?