I'm looking for a sci-fi novel written in English and aimed at a teen audience. I read it in print between 2014 and 2018 and it seemed fairly new at the time. I think the cover was pretty dark-colored, but I don't remember more about the cover than that.

The plot starts by introducing five teens who had won some sort of contest and were either already in a space station or going up a space elevator into space. During their time in space, they are subject to an event that results in them each getting a different superpower, although they don't know what's happening at the time. However, the event is recognized as dangerous and causes them to return to Earth right away. The main character is a teenage girl that was in the group and so now has a superpower. These developments cause further strain to their already strained relationships.

I don't remember all of the powers, but I do specifically remember two. The first was a kind of leadership/persuasion power that one of the boys had. The other four teens found it very hard to disobey him and he also gained some form of enhanced cognition/planning. I remember thinking the other power was very unique at the time: a different boy's skin could grow incredibly fast, allowing him to make armor and claws out of it, but it also impaired his movement. Someone else may have had a teleportation or flight power, too.

The five eventually escape from a place where they are being held and end up fighting and killing each other. Killing another releases their power, which can be absorbed somehow by the one that won. Eventually, the main character absorbs all the powers. At some point along the way, she comes to the conclusion that these powers were granted specifically to oppose an invasion by another alien race.

After the main character has all the powers, she finds the invading ship, gets to it while it is heading toward Earth, and digs through the hull to the center. The hull was kind of squishy; she remarks on how the skin growth/hardening power she took seemed to be required for this. When she gets to the center, she destroys the ship. It's also remarked on how all five of them working together would have been much better suited to destroying the ship than just herself alone, but she manages to do it anyway and save Earth.

The Goodreads summary is awfully plain and unhelpful so I'll refer to this review instead:

Yes, I do mean the outer space as in the giant blackness beyond our planet. At the space camp, these things called fireteams, made up of 5 people, were created for the sole purpose of finding out who would best use the tokens sent to our planet from the aliens farther out in the galaxy. The campers know nothing about this hot mess. It just gets better and better. Of course, Maisie's team is picked as the best fireteam and the actual love interest, Jonathan Ingalls Wilder (I told you it gets better. His out-of-the-picture mom had an obsession with Little House on the Prairie.) is thrown in as a 6th team member. The fireteam is then sent into outer space and given these tokens that merge into their body and partially stick out of their chest. Oh, and they also give them superpowers: supreme technological skills, cognition abilities beyond compare, brute strength and speed, the ability to create a shield around your body, and the ability to shoot small items at a terrifying and lethal speed from your hand with a zap of blue light. [...]

Wilder, the love interest, apparently was out to get all of the tokens in the first place (And through that, effectively killing all of the other members of the team since they can't be removed without stopping one's heart.) and ended up chasing after Maisie to use her to help him get the tokens without telling her. [...]

Maisie ends up gaining all of the tokens through a series of unfortunate events and realizes that she has a purpose: to defeat the pink floating aliens that are coming to Earth to possess our bodies and experience adrenaline and food through us. She, again, gets shot into space and has to destroy their spaceship which seems to closely resemble a candy bar, seeing as how the aliens love food and can only move through solid material.

The cover doesn't give away anything either, it's just dark with a glyph and the title written on it: 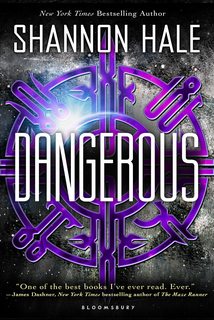 Found with the Google query young adult sci fi book five teenagers superpowers contest space site:goodreads.com/book. Once again, thanks to all these exhaustive reviews making it a Google hit, because the official plot gives nothing.

Not the answer you're looking for? Browse other questions tagged story-identification novel young-adult alien-invasion powers or ask your own question.

6
SF novel with a boy and girl who undergo an alien challenge
6
Trying to find title of novel where Earth people are taken on board an alien ship
3
Book series about a kid's journey to the center of the Earth where he finds the Earth is an alien ship or something
10
Scifi novel about a prison station in the sun that turns into an alien invasion
3
Book about a school for teens with powers
7
Novel series about a group of 6 teens with powers (cause-and-effect, metabolism, bacteria, etc.)