I watched this somewhere in the last five years, I think as part of an anthology (or maybe just a collection) of horror shorts. The opening has a young adult female (might have been Asian?) talking to her boyfriend about believing her apartment to be haunted. During the chat, the connection starts to glitch, with I think the screen freezing, and she first sees the ghost (which might have been a young boy?). I can't remember what exactly happened after that, but something happens where the female is attacked, or otherwise rendered unconscious, whereupon the boyfriend from before enters the scene, apparently actually living just next door despite the girl having believed him to be some distance away, and it's revealed that this is some sort of government experiment with the boyfriend actually monitoring several people in their "apartments", although I don't recall why they were doing it.

You're describing a segment of the anthology horror film V/H/S from 2012 called The Sick Thing That Happened to Emily When She Was Younger. From Wiki:

This segment is shown through computer video chats. Emily talks to her boyfriend James, a trainee doctor, about a strange bump on her arm and how it reminds her of an accident she had when she was younger. After witnessing a small, childlike entity rush into her room and slam the door shut, Emily believes her apartment is haunted.

Emily attempts to contact the being, but it knocks her out. James quickly appears in her apartment and surgically removes an alien fetus from Emily's torso. Aliens are using Emily as an incubator for alien/human hybrids, and James has been working for them and removing the fetuses for some time. The aliens erase Emily's memory, and James mentions that the arm bump is a tracking device. In their next chat, a badly injured Emily believes she sustained her injuries after wandering into traffic in a fugue state.

Here are James and Emily: 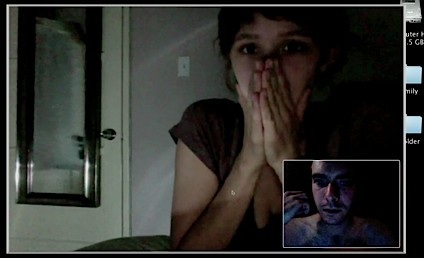 Not the answer you're looking for? Browse other questions tagged story-identification movie horror ghost or ask your own question.

13
Scifi short story about a woman and her AI boyfriend
13
Humorous short story about a young woman who wants to demonstrate shape-changing to her boyfriend
3
Flash point-and-click game where you are a newly risen ghost
7
Kindle book about a woman who helps remove ghosts from houses
8
Two humans land on a planet; one learns to communicate with aliens
6
Horror short film with a woman pursued by the ghosts who exhort her to remove her clothing