All the Pottermore articles on Hogwarts are collected in a book called Hogwarts: An Incomplete and Unreliable Guide. 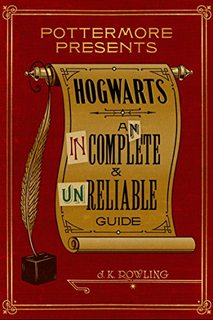 I understand it's a catchy title, but is there actually any information in there which is "unreliable" or conflicts with known canon?

I'm assuming that this is riffing off the section in Harry Potter and the Goblet of Fire where Hermione discuses the limitations of the text of Hogwarts : A History.

“What are you on about?” said Ron, though Harry thought he knew what was coming.

“House-elves!” said Hermione, her eyes flashing. “Not once, in over a thousand pages, does Hogwarts, A History mention that we are all colluding in the oppression of a hundred slaves!”

The image you've included in the question shows the title of the book would be Hogwarts : A complete and Reliable Guide without the post-publication additions by an unknown editor.

It is an indication that the reader shouldn't take the information inside to be wholly reliable or complete.

1) Slytherin is described as being forced out of the school, but the Sorting Hat, who was present, describes Slytherin as having departed (seemingly of his own accord).

When first they came to light,

For each of the four founders had

Take only those they wanted, so,

And only those of sharpest mind

Were taught by Ravenclaw

While the bravest and the boldest

Good Hufflepuff, she took the rest,

And taught them all she knew,

Thus the Houses and their founders

So Hogwarts worked in harmony

But then discord crept among us

Feeding on our faults and fears.

Had once held up our school,

Now turned upon each other and,

And for a while it seemed the school

Must meet an early end,

What with dueling and with fighting

And the clash of friend on friend

And at last there came a morning

What is certain is that by the time Slytherin was forced out of the school by the other three founders, he had decided that henceforth, the Chamber he had built would be the lair of a monster that he alone – or his descendants – would be able to control.

2)Hermione is described as taking four minutes to be sorted, but in the book, it implies she was sorted rather quickly (with only Seamus being pointed out as having taken a long time.)

An archaic Hogwarts term for any new student whose Sorting takes longer than five minutes. This is an exceptionally long time for the Sorting Hat to deliberate, and occurs rarely, perhaps once every fifty years. Of Harry Potter’s contemporaries, Hermione Granger and Neville Longbottom came closest to being Hatstalls. The Sorting Hat spent nearly four minutes trying to decide whether it should place Hermione in Ravenclaw or Gryffindor.

Sometimes, Harry noticed, the hat shouted out the House at once, but at others it took a little while to decide. “Finnigan, Seamus,” the sandy-haired boy next to Harry in the line, sat on the stool for almost a whole minute before the hat declared him a Gryffindor. “Granger, Hermione!” Hermione almost ran to the stool and jammed the hat eagerly on her head. “GRYFFINDOR!”

Which implies it took Hermione quicker than Seamus Finnigan.

Not the answer you're looking for? Browse other questions tagged harry-potter canon pottermore or ask your own question.

11
How many students attended Hogwarts?

42
Why exactly was information on Hogwarts Professors' spouses restricted?
6
Are there any official statements about Hogwarts during Harry's absence to search horcruxes?
23
How many wands did Ollivander need?
15
Are the Four Great Houses of Hogwarts based on the Four Temperaments?
9
How many participants were there at the Battle of Hogwarts?
21
What's the difference between witches' and wizards' robes?
2
19th century Hogwarts uniform
6
How many wands were chosen for Pottermore?
34
Who wrote Hogwarts: A History?