Can or has the Spider-Sense ever been used offensively?

Rated as a mental power, Peter Parker's Spider-Sense rates as a 3 or 4 out of 7, depending on the card series.

There have been discrepancies in explanations of how it works exactly, with someone claiming it's everything from:

Honestly, there's no one canonical explanation for the Spider-Sense, but all basically function the same way: as a personal precognitive "early warning system" which informs his movements, reactions and engages him with his immediate environment. Its core purposes have always been:

However, like any other mental power, wouldn't it be fair to say there may be some unexplored offensive capability to it, as well?

I don't mean it causing Peter to react to the danger and launch an attack, I mean literally if the sense itself has ever or possibly could be weaponized and used to attack an opponent directly?

If the Spider-Sense itself is perhaps signal-based, then could it not be used as some form of projected, focused mental attack?

The closest example I was able to find of this was in the 1980s Spider-Man and His Amazing Friends cartoon, However, that was based on the fact that it was 2 people with the same signal of 6th sense essentially "jamming" each other. You can see it here:

I was wondering if there were any examples in comic of this being used on normal humans or of Peter's powers growing of their own accord and thus developing that way.

I know Kane had painful premonitions which stemmed from his more developed Spider-Sense, but that's about it.

Given that the Spider-Sense is a sense - it only gives Spiderman information, like hearing does - it can't be used itself to inflict injury. You also can't "hear" someone to death. But that's not what offensive means. You certainly can use hearing offensively (Daredevil anyone?)

An offensive is a military operation that seeks through aggressive projection of armed force to occupy territory, gain an objective or achieve some larger strategic, operational, or tactical goal. ~ Wikipedia

An offense always requires some form of weapon, which doesn't have to be a physical thing. Knowledge, information, or even psychology can be used as a weapon (Mister Fantastic literally uses his superior intelligence as a weapon).

According to Wikipedia, "weapons may be construed to include anything used to gain a tactical, strategic, material or mental advantage over an adversary or enemy target."

So this question asks if Spiderman has ever used his spider-sense to gain a material or mental advantage in an operation that seeks through aggressive projection of armed force to achieve an objective against an opponent?

Yes. Spiderman used his spider-sense to find [gain a mental advantage on] a guided missile [an armed force] and aggressively project that missile into The Finisher's car, so he could kill The Finisher [obtain an objective].

So yes, when Finisher sends a homing missile to Spiderman, why didn't he send it off into a wall or something? Well, as the Webbed Wonder says, "It's only fair." This was an offensive act. 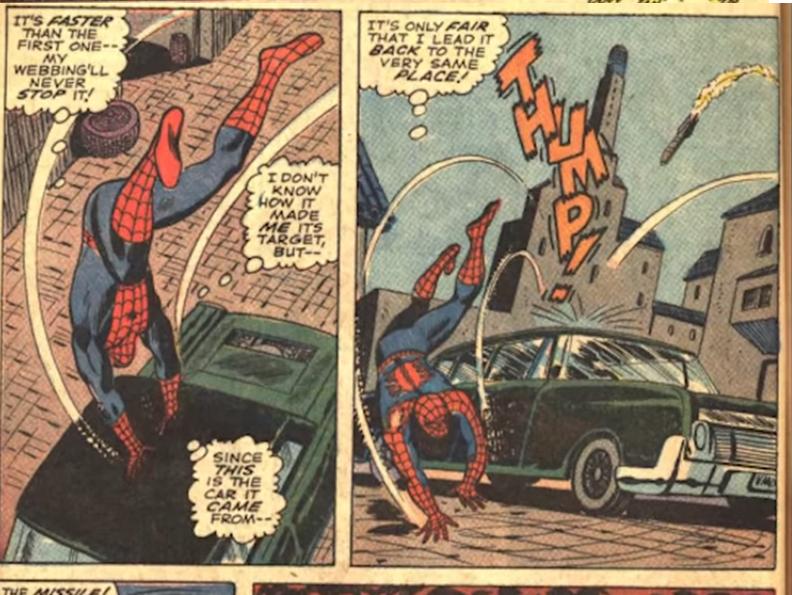 This is different to how Green Goblin died: Spidey detected the flyer but never used it as a weapon. Gobby just happened to be in the line of fire.

The effect with Zoltan was not planned and hurt both of them, it was not an offense.

There is a book that was written back in the 90s where Spider-Man fights Carnage alone. Carnage's goal besides his obvious killing sprees was to dump some sort of super crazy serum into a homeless shelter's food day stew(even Spider-Man wonders who would even eat the soup after Carnage had done something to it). The book described a few fights-using his spider-sense to avoid the various hammers, blades, and spears being thrown at him-and "finding ways to counterattack the onslaught of weapons". I remembered reading something like-'Just have to wait for the opening" while from behind the cover of a couch or table. He couldn't see him, so he was "feeling" for the right time.

Another instance was in Spider-Man 3 when black-suit Spidey fought Sandman. The rematch was more of Spidey going full offensive. I don't remember the exact scene, but unlike the 1st fight, he reacted less and was attacking, then counter-attacking when Sandman finally had a chance to throw a punch. Sure it could have been the symbiote, but it was never shown or really hinted at-it just seemed Spider-Man had a real edge(possibly upgraded spidey-sense?)

Possibly: His spider sense has been used offensively many times to break into high security buildings / headquarters without being detected. His Spider sense allows him to find safe passage. It even helped him disarm a bomb. However, I can't remember a time where his spider sense directly attacked someone; it's usually indirect.

For example, many moons ago, there was a humorous scene in a Fantastic Four crossover where Ben Grimm is reading Salem's Lot alone in the FF's base. And then in the next panel you see Spidey's hand slowly reach down and tap him on the shoulder. Grimm screams and inhales his cigar! Spidey then gets a stern lecture about arriving unannounced and disrespecting all of Reed's security systems.

In the cartoon, Avengers: Earth's Mightiest Heroes, Spidey uses his spider sense to disarm Kang's time machine / doomsday McGuffin, by removing the "safe" parts that wouldn't cause it too explode.

In Spiderman 2099; Alchemax Corp wants to recreate Spiderman's powers because they see him as the ultimate corporate raider. I.e. he can break into a rival corp undetected and steal all of their intellectual property.