So in the opening scene of Star War Episode IV, Darth Vader and crew are closing in on Princess Leia's ship and she puts the Death Star plans on R2-D2 and jettisons him down to Tatooine.

This seems really risky because if anything happens to the escape pod or those droids, poof, the plans are gone.

In the Star Wars canon, was there no way to electronically transmit the plans? Couldn't she have sent them to the rebel base through electronic transfer of some sort? Or, if the concern was that the Imperial fleet would detect such a transmission, couldn't she instruct R2-D2 to make such a transmission once he touched down on Tatooine?

Is there an in-universe explanation for this choice?

Transmissions were sent, but the reason they relied on the physical transfer of the plans was because transmissions can be traced, and blocked, or intercepted. As Jeeped provided in a comment:

VADER: Don't play games with me, Your Highness. You weren't on any mercy mission this time. You passed directly through a restricted system. Several transmissions were beamed to this ship by Rebel spies. I want to know what happened to the plans they sent you. I would assume Vader ordered some sort of jamming technology instituted once the original 'beaming' transfers were discovered. It's not like they didn't use similar methods elsewhere.

Vader knew the rebels were attempting to get their hands on the plans, because of the previous attempts to transmit them. The reason why he was interrogating Leia was because he knew that the droids had escaped with the plans - and physical objects can be harder to track.

R2-D2 and C-3PO used an escape pod to smuggle the Death Star plans off the Tantive IV. The Devastator's officers noticed, but neglected to fire as they detected no lifeforms aboard.

Interstellar transmissions are low-bandwidth, and they degrade easily.

The Death Star is an enormous engineering project. Its blueprints fit into a physically small volume, but so does C-3PO's vast linguistics database; the amount of data in the Death Star plans must be astonishing. The Rebels hope to find a way to exploit Galen Erso's sabotage, but they don't know where in the plans to look for vulnerabilities,(1) so they need to send the entire set.

With Imperial forces in hot pursuit, the rebels didn't have time to transmit the data with enough redundancy to protect against signal degradation and ensure the plans' reception in usable form. For example, asteroids interfere with interstellar transmissions:(2)

PIETT: The Emperor commands you [to] make contact with him.

VADER: Move the ship out of the asteroid field so that we can send a clear transmission.

— The Empire Strikes Back

These lines of dialogue begin at 0:24 in this clip, followed by a flickering, jittery, grainy projection from the most powerful person in the Empire:

Since the Emperor — with all of his resources — can't send a steady, detailed faster-than-light transmission, the rebels must have faced even greater limitations.

Vader's conference with the low-resolution, flickering images of the ship captains at the start of the clip takes place in realtime, with no speed-of-light lag. Although at least some of the ships are close enough together for lightspeed communication, the simplest explanation is that they are using the same faster-than-light communication system here that they would use at interstellar distances.

A similar effect appears about 79 minutes into The Phantom Menace. While on Tatooine, Padme uses her royal yacht's holographic communicator to play a message from Sio Bibble on Naboo. Bibble's low-resolution image constantly wavers, and his voice is distorted. Even the most stable frames in his message are blocky: 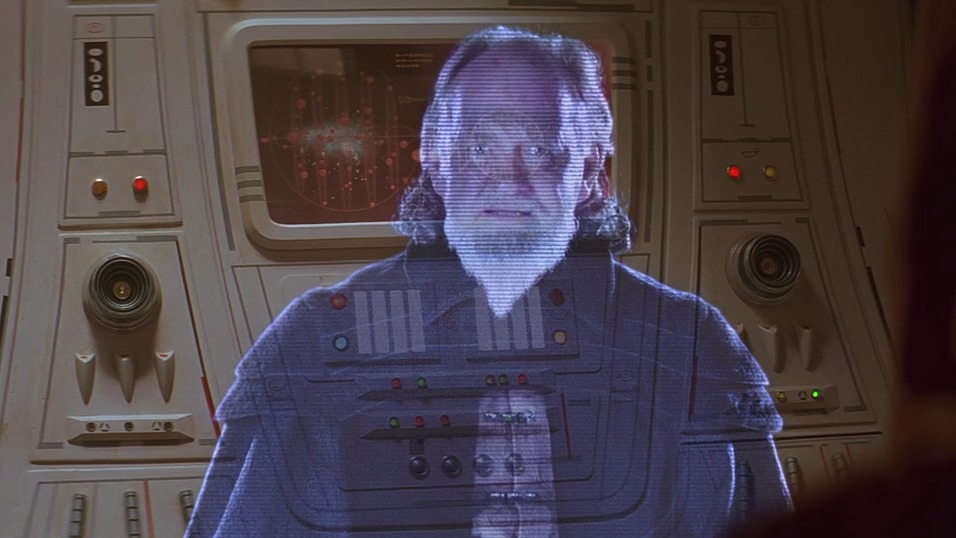 Darth Sidious' holograms in The Phantom Menace show the same characteristic jitter and pixellation. He was concealing his identity throughout this film, though, so the poor image quality in this case may be due to more than technological limitations:

(1) The attack plan that the Rebels hurriedly devised in Episode IV depended on Galen Erso's sabotage and on two design flaws (the shield permeability and the exhaust port), and ultimately it only succeeded because of space wizards. The Rebels may have been able to devise a safer and more reliable attack strategy if they'd had more time to study the Death Star plans.

(2) The fleet's use of weapons may be a contributing factor, but if it was the only concern then the ship would not have had to leave the asteroid field.

The end goal for the Death Star plans was to send them to the hidden rebel base at Yavin IV, to be analyzed for any possible weakness to destroy the Death Star.

It seems obvious why they wouldn't want to transfer the plans directly to that base - it's a hidden rebel base. Any transfer to that location, if intercepted, would immediately reveal the base's location.

And we know the Empire can track transmissions like this.

VADER: Don't play games with me, Your Highness. You weren't on any mercy mission this time. You passed directly through a restricted system. Several transmissions were beamed to this ship by Rebel spies. I want to know what happened to the plans they sent you.

If they caught wind of the plans being transmitted to a random moon near the planet Yavin, it would immediately clue the Empire in on their location.

As it turns out, the Empire discovered the location anyway. But they had no way of knowing that would happen when making these plans.

In the Star Wars universe, long-distance communication is not good or reliable - image quality on links is well below what you'd accept for Skype, and keeps dropping in and out. Getting large files over that kind of link simply isn't practical.

Sure, a broadcast might get the message spread around. But how do you know anyone is listening?

Because it was most likely the last copy in the Galaxy

At the end of Rogue One Tarkin destroyed the whole library, which housed the original copy of the death star plans. The plans were ridiculously well protected at this place, one had to physically access a tape and extract the data from it. So it is very likely that this was the only copy of the top secret information. Otherwise the Rebels would probably have tried to steal it from a less protected place and Crennic would not have to go there in person to access the data.

Even if we cannot say for sure if the disk was in fact the last copy of the Death Star plans, the Rebels would have reason to strongly believe so. If the Imperium did not have the original plans anymore, it would have been a lot harder to re-engineer some of the finer details of the machine to find the weakness themselves. And it would probably be harder for the Imperium or anyone else to build a new Death Star or improve on the original design without the original plans.

Transmissions can be blocked, traced and captured

Different scenes from the movies and series suggest that transmissions in Star Wars can be blocked by interference. They can also be traced (as it seems origin and even destination can sometimes be traced by the enemy) - this would endanger all involved parties and the transmission might not even go through (especially with the huge amounts of data the plans contained)

Also canon suggests that almost all forms of encryption can be hacked in the Star Wars Universe. This would mean that any transmission over wider range would pose the risk of the empire or someone else capturing the plans. This is a huge risk, since the empire would then specifically know what details the rebels have in possession, could search and fix the weakness and could (probably) more easily build a new death star or improve the current one.

An agent carrying a disk could probably destroy it before being captured.

The simple asnwer would be,security and demand for such data/schematics Considering the paperless trail and origins of delivery.

As we know now, princess Leia had two missions. First mission is to retrieve the Death Star plans and the second was to find Obi-Wan Kenobi and bring him to the alliance. The transmitting the plans was out of the question. As her father said he trusted her with his own life to get the job done.

43
Is there faster-than-light communication in the Star Wars universe (other than hyperdrive)?