I read a book called Thunderbird by Katy something I have forgotten her last name. I vaguely remember it being about either space or flying or flying in space.

Any chance you're thinking of Thunderbirds are Go! by Kitty Richards?

It's not easy being the fourteen-year-old son of a billionaire ex-astronaut. Your older brothers get to fly the super-advanced Thunderbird rescue vehicles, but you're not even allowed to touch the control panels! Now Alan Tracy has the chance to prove he's got what it takes to be a full-fledged Thunderbird. With his family's lives at stake, he must defeat The Hood -- a maniacal villain with an evil plan to destroy the Tracys and their Thunderbirds.

It's an adaptation of the then-upcoming live-action remake of the supermarionation TV show, Thunderbirds.

I found the book it wasn't Thunderbird but Firebird of the Firebird trilogy. Her name is Kathy Tyers.

Her death was expected, but something more powerful kept her alive.

Lady Firebird was born to the royal family of Netaia. Because of her birthplace in the family, however, her life is expendable. Honorable suicide is the highest calling she could hope to attain. When she is chosen to lead an attack on the neighboring planet of Veroh her death is expected. Instead she is taken prisoner during the battle and is held by the enemy.

With her own people seeking her sacrifice, Firebird must choose between two worlds before she can carve out her new destiny. This is the story of Lady Firebird's personal battle and its eternal consequences, not only for herself but for everyone around her, and especially the man who loves her. 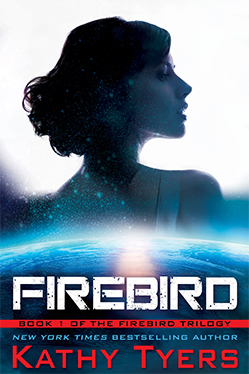 Not the answer you're looking for? Browse other questions tagged story-identification novel space space-exploration or ask your own question.

17
Man dies in space but his head is preserved, later reanimated with a robotic body
3
Book about a Mech pilot trying to fight beings called HuMax
3
Book about a mutiny on a space ship, the hero has a scarred face
9
Story about space flubber
11
Sci-fi book about a body transfer called ‘body’ something by a female author possibly named Sue
4
90s (or earlier) book/novel: daily memory loss and a device called the Memory
9
Book about a female protagonist travelling through space with alien creatures called the Leviathan