Looking for a fantasy novel where gods rule over humans

It's a fantasy novel with a yellowish / whitish cover. The title was white or shiny. I believe there was a man on a horse on the cover. I first read it about 12 years ago. It's a fairly thick book.

In it, Gods exist alongside humans and rule over them. They can see everything a human is doing at all times unless the person is touching a man-made material like metal. I think they also want to rebel against the gods. I believe remembering the author and main characters to be male. At one point, I think they travel to another city which is rule by a different god.

The book is Between the Rivers by Harry Turtledove. 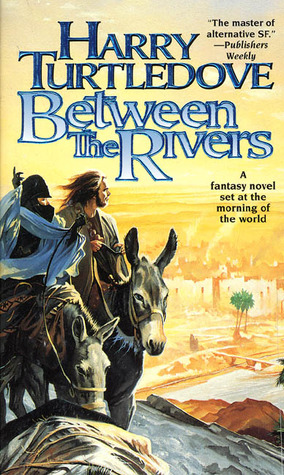 In the novel, the cities and regions are each ruled by their own gods. In the city of Gibil, however; the god Engibil has gotten lazy and does not monitor his city. As such the inhabitants have developed technology such as writing and smelting, and have started to lose respect for Engibil and his power. The other gods have gotten angry at Gibil for reasons they keep to themselves, and have started to refuse to trade with Gibil. It becomes the task of the main character, Sharur, a merchant, to travel the land and find out why the gods are angry and try to solve the problem.

The gods are able to see through their citizens, or control them at will. Gibil's people are breaking away, as Engibil, grown lazy, has imbued his power in an object. And indeed, Sharur tries to help citizens of other cities to break away from their gods, although part of the narrative is also him realizing the drawbacks of free will.