Which of the seeded humanoid species was the first to be warp-capable? [closed]

Ask Question
Asked 6 months ago
Active 5 months ago
Viewed 357 times
-8
Closed. This question needs details or clarity. It is not currently accepting answers.

In Star Trek - TNG S6E20 The Chase, the apparently first humanoid species in the Galaxy from around 4.5 Billion years ago appear, travel the galaxy and spread their genetic material on terraformed planets. In the episode, it is stated that they were the only humanoids and seeded genetic information for new humanoids to evolve on some of the primordial worlds they discovered. The recording asserts that no other humanoids existed when these seeders existed and that they specifically seeded humanoids like themselves (or at least raw material which would eventually evolve into a humanoid species with very similar co-compatible DNA)

We also know that this original species was obviously warp capable, and others likely existed at that time (such as the Crystalline Entity, and likely the Founders). I'm not asking about the first warp-capable beings in the universe. This is about a sort of "space race" between the humanoids these guys spread around - a limited set of species.

This has nothing at all to do with "inventing" warp technology either - not interested in the smartest race. If someone stole the technology from the Dominion, they won the race. If someone rides around on saddles on a Crystalline entity first, they won the race. It's about which species evolved into a humanoid and then knocked on a neighbor's door first, no matter how they got there.

The answer will be based on in-universe current information. The exact number of different species which evolved is unknown and all the different species created this way are unknown. But from what we DO know, which species was warping around the galaxy first?

Warp capability evolved naturally in a species which converted organic matter into energy known as the crystalline entity. This is likely the first warp-capable species and the date this species evolved is unknown, however such an evolution would necessarily be measured in many millions of years. However, referring only to humanoid species, none are known to naturally travel at warp speeds.

Based on genetic similarity to earth humans, the Voth evolved from Terran ancestors 20,000,000 years ago and traveled to the Delta quadrant (presumably to escape the asteroid extinction event Earth was about to experience). According to “VOY: Distant Origins” the Voth DNA contains 47 genetic markers of humans. 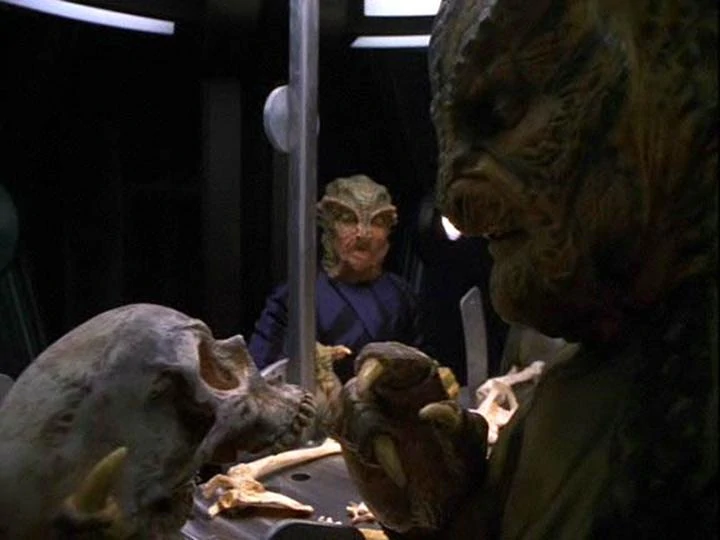 Based on this episode, it seems from our best information the Voth had won the space race among seeded humanoid species.

The question should be unanswerable.

PART ONE, REASONS WHY THE QUESTION IS PROBABLY UNANSWERABLE

Of course it was necessary for several generations of massive, short-lived stars to synthesize heavy elements in Supernova explosions and enrich the interstellar gas and dust with them in order for solid planets to form on which life could evolve, eventually become intelligent, and discover enough metals to build civilizations.

The star Kepler-444 is estimated to be about 11.2 billion years old, and it has four small rocky planets orbiting close to it. This implies that intelligent life might have evolved and developed civilization as long ago as about 6.6 billion years ago, which is about 2 billion years before the Sun "burned hot in space".

In "City on the Edge of Forever":

KIRK: Then what is it?

GUARDIAN: (The doughnut pulses bright in time with the words) A question. Since before your sun burned hot in space and before your race was born, I have awaited a question.

KIRK: What are you?

GUARDIAN: I am the Guardian of Forever.

KIRK: Are you machine or being?

GUARDIAN: I am both and neither. I am my own beginning, my own ending.

SPOCK: I see no reason for answers to be couched in riddles.

The ruins of a large city on the time guardian's planet are only:

SPOCK: And of considerable age. On the order of ten thousand centuries old.

And a civilization existing a mere million years ago was insignificantly old compared to the age of the Guardian of Time. But on the other hand there could have been civilizations on that planet much older than the ruined city that have no remaining traces for Spock to detect.

In TNG "The Chase" there is a puzzle left by an ancient species in the DNA of lifeforms on many different planets.

LAFORGE: This is not a natural design. Captain. This is part of an algorithm, coded at the molecular level.

PICARD: An algorithm? Are you saying that these DNA fragments are elements in some kind of computer programme?

LAFORGE: I know how it sounds, but there's no way this could be a random formation. This is definitely part of a programme.

CRUSHER: This fragment has been part of every DNA strand on Earth since life began there, and the other fragments are just as old. Someone must have written this programme over four billion years ago.

PICARD: So, four billion years ago someone scattered this genetic material into the primordial soup of at least nineteen different planets across the galaxy?

DATA: The genetic information must have been incorporated into the earliest lifeforms on these planets, and then passed down through each generation.

And the program creates a hologram with a message from a species that evolved over 4,000,000,000 years ago and found no other intelligent life in their part of the galaxy. So they seeded their genes on many young planets so that someday intelligent beings like them would evolve on those planets.

In the TAS episode "Beyond the Farthest Star" a strange alien starship is found orbiting a dead star:

KIRK: Can you identify that metal, or the design of the ship?

SPOCK: Negative to both, Captain. Unknown alloy, harder and lighter than any registered metal. It is not a recorded galactic starship design. Retro analysis of the ship's spectra dates it as having been in orbit here for slightly more than three hundred million years.

UHURA: It's beautiful. What kind of people could have built it, to touch even a starship with grace and beauty?

KIRK: A civilisation that advanced three hundred million years ago before life even emerged on Earth.

So that is an example of a civilization advanced enough for interstellar travel that existed about 300,000,000 years ago and is no more.

And if that is the case for some species, should they be dated by the first or by the most recent date when they developed warp drive?

There is one possibly correct answer from one possibly canonical source describing the known to the Federation warp capable species considered the oldest at one specific time in Star Trek history.

in TAS, which has not always been considered totally canonical by all Star Trek creators and fans, the episode "The Jihad", which opens with a log:

Captain's log, stardate 5683.1. We're making a rendezvous with the Vedala asteroid on a unique mission. The Vedala are the oldest space faring race we know. They say something incredibly dangerous to the safety of our galaxy is developing and they have sent for selected specialists, including Spock and myself.

The Vedala were a species associated with the Vedala asteroid. They were, as of the mid-23rd century, the oldest surviving spacefaring race known to the Federation. Physically, they had somewhat feline characteristics, including a tail, and a mighty roar.

Not the answer you're looking for? Browse other questions tagged star-trek warp or ask your own question.

38
Which race in Star Trek universe was the first to invent Warp technology?

47
Did The Founders evolve from the race that seeded the Alpha Quadrant?
22
Has Starfleet ever made First Contact with a pre-established space-faring species oblivious to alien intelligence?
18
Why are there so many technologically similar civilizations in the Star Trek universe?
4
Why does the warp drive make a sound?
8
Did Zefram Cochrane invent the warp drive that is used by all races?
11
Were the silicon-based life forms also seeded from an original race?
12
What became of the Kelvan technology in Star Trek TOS "By Any Other Name:?
8
Could Starfleet make first contact with pre-warp exploratory species?