What nationality was Guru Pathik (from a biological perspective)?

Guru Pathik, who featured in a few episodes towards the end of season 2 (Book 2: Earth) of Avatar: The Last Airbender, doesn't appear to come from any of the four nations of that universe. The linked wiki page even says "his nationality was unclear", but then goes on to talk about not considering himself of any nation, which is not what I'm asking about.

From a racial point of view (meaning I'm not interested in whether he considered himself of any of the nations politically or ideologically or anything like that; I'm interesting in what nation he was from biologically), what nationality did he belong to in-universe? Out-of-universe, he's pretty obviously an Indian man, but as far as I'm aware, no-one else in-universe resembles an Indian man. 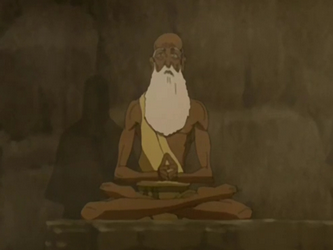 Generally speaking, I am under the impression that the Fire Nation resembles the Japanese, the Earth Kingdom resembles the Chinese, and Water tribes resemble Inuits, so none of those seem like good fits. He was associated with the Air Nomads, but looking at Aang, and from flashbacks and such of Airbenders, none of the Air Nomads appear to resemble Indians, so unless there are people who don't come from one of the four nations (although it's strongly implied, if not outright stated, that everyone does come from one of the four nations), what in-universe nation would have what looks like an Indian man from real life?

I'm looking for answers that include some canon evidence to support any claims made. I know I make some assumption in the above question, and I'm happy to have those assumptions challenged, but only if those challenges come with evidence to back them up. Word of God answers are acceptable, but speculation or theories are not.

Although it's a weak link, if we go by skin colour alone, the best I can come up with is that Guru Pathik might have been of the Earth Kingdom.

The only characters I can think of whose skin was nearly as dark as Guru Pathik's were from The Legend of Korra; namely Aiwei and Kai, who are both of the Earth Kingdom. 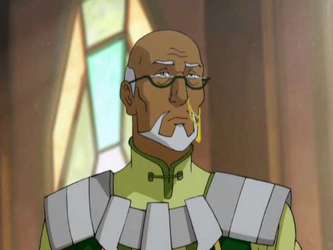 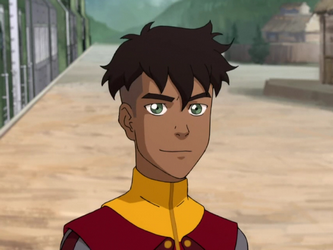 Whilst it's unfair to say that just because these characters have darker skin, they are therefore Indian, it is worth noting that (besides people of the Water tribe, whose skin colour is generally lighter than this) it sets a precedent for there being darker skinned people from the Earth Kingdom, which raises the likelihood that Guru Pathik is of the Earth Kingdom biologically.

This is the best I can do for an evidenced assertion, which is a weak one, as I said, but it's at least something with some backing from what we've seen from the shows. Culturally, yes, Guru Pathik was likely more inspired by the Air Nomads, but this question is about his biological nationality.

Furthermore, there has been at least one other character introduced via the comics (specifically the comic series "Turf Wars") of relevance; Jargala Omo, who has a darker skin tone, but who also has quite Indian-style clothing (the wiki also suggests this as its first Trivia bullet point). 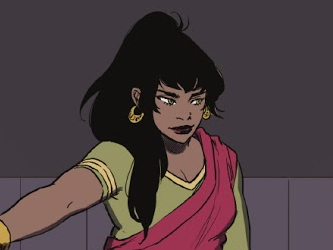 Probably Air Nation. Air Nation had temples at four corners of the Earth before getting wiped out. Presumably, some of them look like Indians look irl. Just because monks in the Aang's temple do not look that way, doesn't mean monks in one of the other temples couldn't look exactly like Pathik.

When we meet Pathik, he is in the ruins of the air temple.

18
Have people made a correlation with eye color and bending element in Avatar?

27
What stops other benders from mastering the four elements?
8
So what if Fire Lord Sozin was able to kill Aang?
6
What species of Bear is Bosco and where was he found?
2
Did the Fire Nation support child labour?
5
Why were the Air Nomads against the concept of hope?
34
Where do Airbender babies come from?
10
What nation is Pema from?
4
How did Guru Pathik get in air temple without flying bison?
3
How come Korra could bend three elements so young before training?