What makes the world so oblivious to Clark Kent's secret?

Superman's alter ego is Clark Kent. Unlike many other superheroes, Superman dresses up as a human to fit in.

What makes the world so oblivious to Clark Kent's secret; Superman? (In regards his poor disguise).

Superman has always been a public figure, but he doesn't wear a mask. His entire face is visible to all, and he willingly has photos taken, kisses babies, etc. Batman, Flash, Green Lantern (the Hal Jordan version at least), etc. ALL wear masks to cover their faces. Their masks make people wonder what is beneath them.

Similarly, since Superman doesn't wear a mask, many (if not most) people assume he has no secret identity. This is aided by the fact that he's always been very open about his back story - he's NOT human, just human-looking. He's openly admitted that he is the last survivor of an alien race, and that he's adopted Earth as his home. It is difficult for people to believe that someone with so much raw power, who has been so open, has a secret. They may wonder what Superman is doing at the moment, but they never wonder who he is.

For those who DO suspect he has a secret identity, Clark Kent is not a likely suspect. The only similarities are his hair style and color (though he does subtly change his hair style as CK, when not wearing a hat), basic build, and eye color. Glasses do quite a bit to change the shape of your face, especially when you never publicly remove them.

Then we have the steps Superman takes to make his disguise more effective. Clark Kent almost always wears a suit and tie. He wears a button-down shirt, suit coat, tie, nice pants, and simple shoes. He prefers dark browns or blues, and rarely removes any of his clothing layers (excepting overcoats when appropriate) except around family and close friends. Superman wears a very bold costume, skin tight, with a big, billowing cape. His musculature is evident. This disparity does quite a bit to make Clark Kent's body type look different from Superman's.

Superman is also an accomplished actor, in a limited scope. In essence, he's spent years creating a single persona - Clark Kent - and he can drop into it in a heartbeat. Everything about Clark Kent is different from Superman. Clark has an entirely different posture, different speech patterns, and different word choice. Clark is passive, except when he is actively working on a story, Superman is... not brash, but firm.

From a personality perspective, physical perspective, and presumption perspective, Clark Kent is decidedly NOT a candidate for Superman's secret identity, to 99.99999% of the world.

For everything else, there's Super-Hypnotism.

The blog 'Texts From Superheroes' poses an alternative explanation: 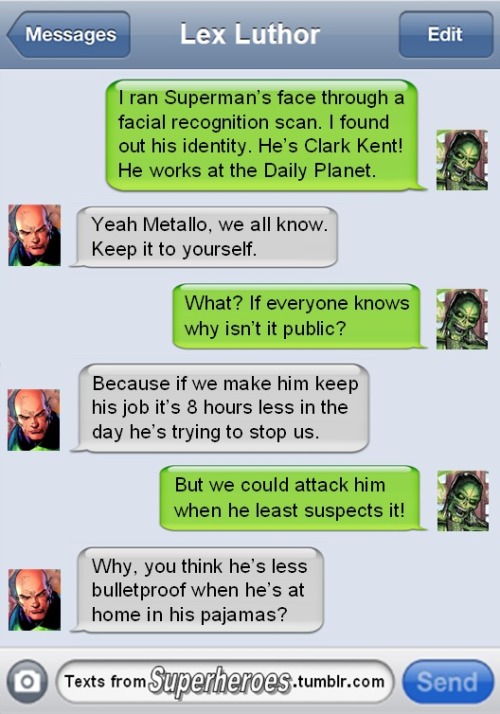 I have always assumed - and therefore I have no references to back this up - that the "disguise" relied on the fact that Kent was not Superman.

Superman is SUPERMAN! He's super! He flies, he never hangs around for long, he has peircing blue eyes and charisma pours off him like water off the Niagra falls. His very presence strikes awe into those that behold him.

Clarke Kent possesses none of these attributes, not one. If one were able to behold Superman and not be flummoxed and completely awe struck, and were therefore able to really take in what he looked like, you might remarke that he did pose a passing resemblence to a certian mild mannered reporter. However, you still wouldn't put two and two together, because Kent simply cannot be Superman, because he isn't dazzling, fast, strong, charismatic etc . . .

One of the most interesting things about Superman for me is that he does think of Clark Kent as his true identity. Remember, even though he is an alien from Krypton, he was brought up by the Kents from a baby. His whole identity and value system is bound up with that.

Compare that with Batman. Even though Batman is a costume that Bruce Wayne puts on - it's not innate to him in the way that Superman is to Clark - Wayne thinks of Batman as his true identity. It's an interesting inversion.

It can actually be argued that Superman has 3 identities, not 2. While they are all tied together, each is unique and very few people know all three.

It is the separation of these personality traits, as well as using the physical changes of slouching, altering his voice slightly,wearing glasses to distort his eyes and several acting tricks (pretending to burn his tongue on hot coffee or acting startled at a loud noise) that help to differentiate to the public between Clark Kent who is human with flaws and faults from Superman a Kryptonian with powers and abilities beyond any mere mortal. The fact that the personalities are so different prevents people from associating one with the other.

If you ask me, I find it intriguing and fascinating.

I'm not a big fun of comics but Superman is hard to miss, so here is my perspective.

Taking aside the fact that it is unrealistic (it is as much unrealistic or improbable as a man flying), try to see beyond this impossibility and interpret what the real meaning or message might be.

Remember that probably the best way to hide is a plain sight, what's right there before your eyes, in real life, can be the hardest thing to notice.

But the main point, and this is only my interpretation, but this is one of the things I love about Superman:

It is very hard to see the heroes that are around you if they are regular people, nobody can imagine that behind the not outstanding Clark Kent, this humble and shy person with a regular job, lies Superman. And this I think is a gem of this comic, it tries to show us that we should do a better job at noticing the day to day heroes, the one that with no credit and without ever being noticed or given any credit, are heros to their families, friends or neighbors, that the one sitting next to you, in the office, might just be a super hero.

There is a canon answer from Superman 330 (12-78). Subconscious use of super-hypnotism, augmented by the Kryptonian lenses of his glasses. 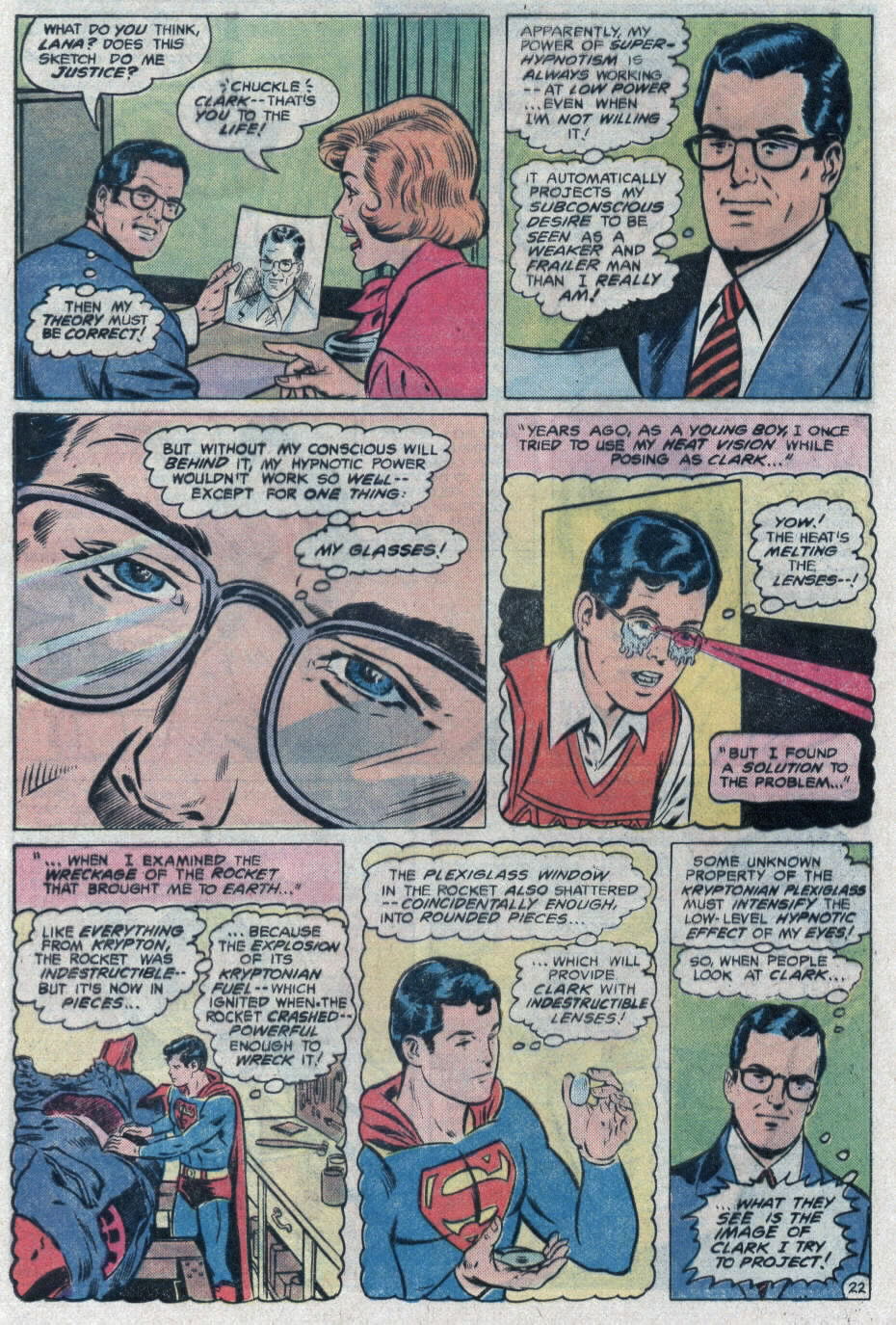 In this scene, Clark Kent is about to tell Lois Lane that he is Superman. We see him go from mild-mannered, hunched-over Clark Kent to confident, standing-up-straight Superman. The transformation is really well-done.

Here is the scene:

This is also discussed in this article: Superman’s most amazing special effect didn’t require computers or a green screen.

We see him go from Clark Kent to Superman:

And then back again:

So the answer to your question is that Superman disguises himself through a combination of body language and carrying himself differently when he's Clark Kent.

If you find this unbelievable, consider this tweet. Although it's a joke, it actually did make me realize that the Clark Kent/Superman disguise wasn't that unbelievable after all and shows us this happens in real life too. 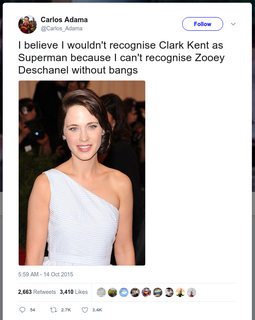 John Byrne's Man of Steel series explained that Superman uses his super-speed to vibrate his face so that it's always blurry to observers:

Byrne came up with explanations for how Superman’s disguise works, such as the public simply does not realize that he has a secret identity since he is unmasked, that Superman would vibrate his face via his super speed in order to blur his image to photographers, and having Kent keep a weight training set around to explain how the human and presumably weaker Kent could have a frame as massive as Superman’s. Byrne's Superman felt that his deepest roots were on Earth, and that his home planet of "Krypton is anathema to him".

This is similar to what the Flash and Reverse Flash do to prevent pictures from coming out and from being recognized. 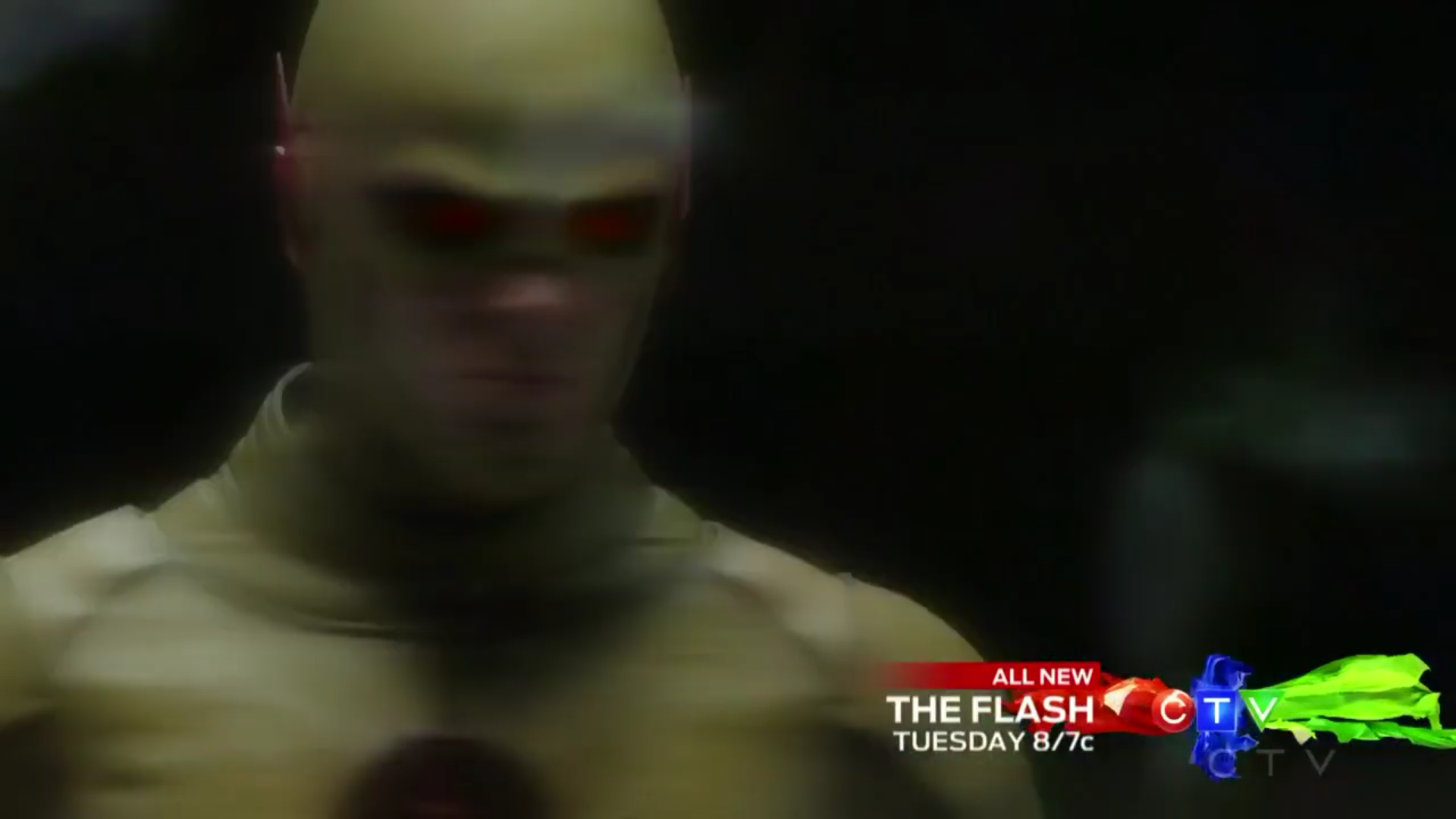 This is for aritistic reasons, i guess. The reader is supposed to recognize him in his disguise.

Fo a similar reason, most cartoon Characters wear the same clothing all the time (a fact somewhat played with in an old Donald Duck comic i read many years ago, where his closet is shown to be filled with a dozen or so sailors jackets and not much else)

I thought the answer was simple, because public just see Clark Kent as an ordinary person who resembles Superman. You know, like someone who resembles a celebrity.

That is, unlike Batman or Zorro (or 10,000 others) who put on a mask in "hero mode", Superman puts on the mask in "non hero mode". The "mask" is mostly wearing glasses and a suit, but still.

Does that make Superman an antihero, psychologically? It is strange in any case.

Well, along with Superman's poor costume choice (on the author's part), the author also failed to characterize the civilians. Therefore, unless the person is one of the main characters, nobody's going to call him out on his identity.

Superman is this super-powered alien celeb who doesn't wear a mask and lives in the fortress of solitude in north pole. Do you wonder about Johny Depp's secret identity? You probably wonder about his private life but you don't wonder about his life as a white-collar worker. the Clark Kent identity isn't a secret identity(like it is in batman's case) but more like the rags kings would wear when they wanted to walk among the ordinary. Clark Kent is a shy klutzy reporter who just happens to look like superman. the resemblance is almost never mentioned. Afaik it was only mentioned in the 50's tv show, superman returns and superman: american alien.

Not the answer you're looking for? Browse other questions tagged comics superman dc or ask your own question.

3
why nobody figures out that Superman and Clark Kent are the same person?
1
How does Superman conceal his identity with just a pair of glasses?
43
Why doesn’t anyone figure out He-Man's secret identity?
9
Has someone ever mentioned the resemblance between Clark Kent and Superman?
8
How could nobody recognize Oliver Queen as Arrow
5
Has anyone been suspected as being Superman's alter-ego, other than Clark Kent?
3
Was there an in-universe discussion of super-hypnotism and ethics?

17
Does Lois Lane Know Who Superman Is (In Any Versions or Reboots)?
3
How does 'Man of Steel' differ from how Superman is portrayed elsewhere?
0
Are Superman's costume changes scientifically possible (manipulating Atoms)?
6
Clark Kent as Cold War Reporter
10
How much of Metropolis is Toronto?
9
Has someone ever mentioned the resemblance between Clark Kent and Superman?
7
How does Clark Kent fool facial recognition systems?
8
Has Superman ever willingly revealed his identity to Lex Luthor?
19
Has either Batman's or Superman's identity been accidentally revealed by someone in the comics?