Why is Michael Burnham’s prison uniform - not uniform?

In ST: Discovery Context is For Kings Michael Burnham is in a prison transport with prisoners wearing grey jumpsuits, but her jumpsuit uniform (?) is gold with a blank blue Starfleet badge. She was not a member of Starfleet at this time (not reduced, but completely removed as a mutineer). Is this just Hollywood or does making her stand out serve some penal purpose? This seems like putting a bullseye on her back - like placing a cop in prison and giving him a uniform. That won’t end well. Does not sound like Star Fleet standard procedure! 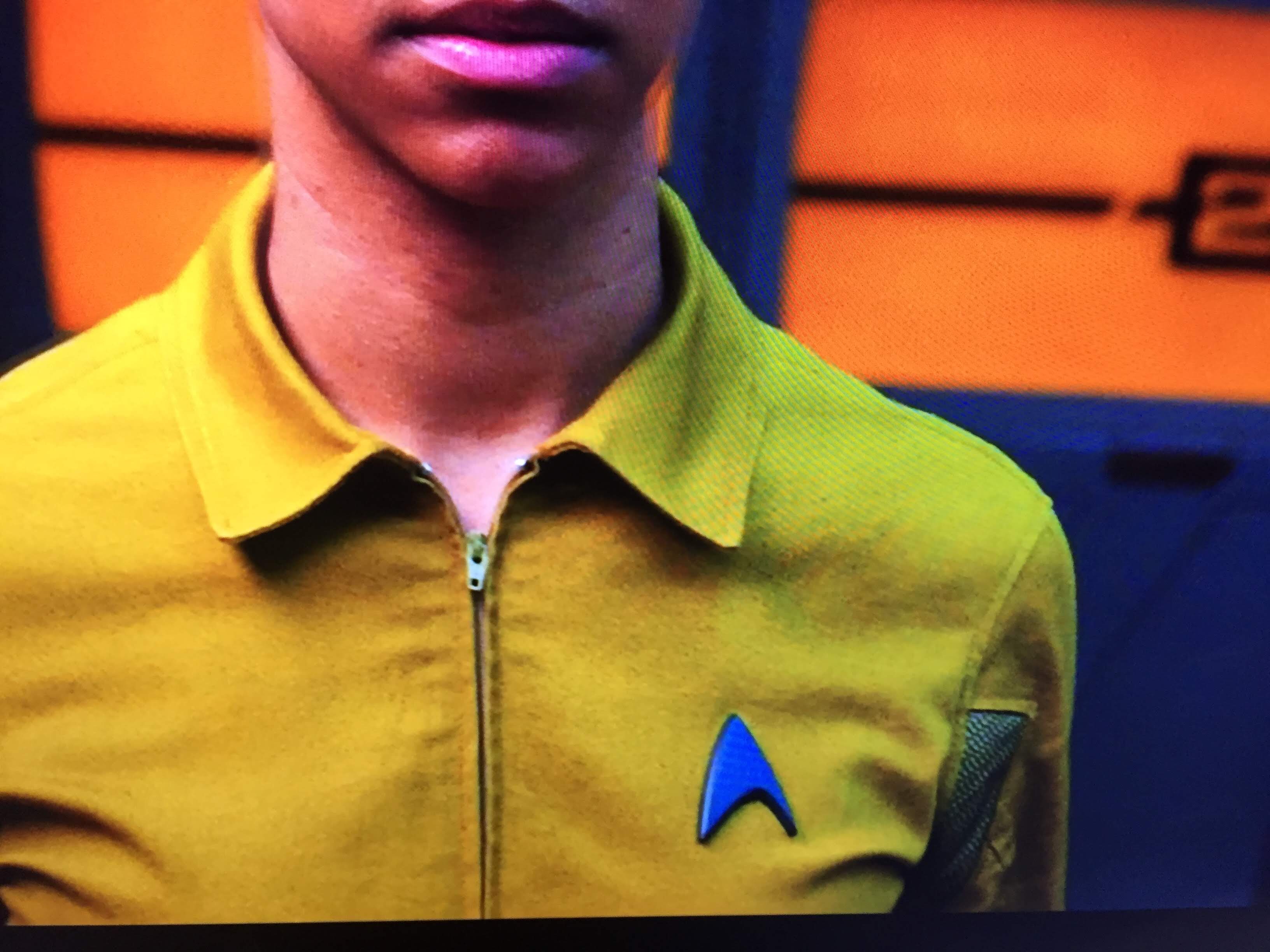 Further information: Star Fleet’s military protocols derive from its origins as the U.S. Navy (Gene Roddenberry). As such they can only reduce military prisoners in rank. This is because if they were “stripped of all rank” as Michael was we would have no more authority over them - they would be civilians (like in the real world where removing ALL rank is a complete discharge).

However, Michael was “stripped of all rank” and still wears a badge. Note that all Starfleet members have a rank, the very lowest is crewman. There have been many times in Star Trek when personnel have been “stripped of rank” which simply means a reduction. 5 members of Equinox in VOY: Equinox pt I were “stripped of rank” this way, making them crewmen (but they were still IN Starfleet. Also, Many resources exist to explain the badge colors, symbols, and rank dots. From what I find a blank blue badge does not exist in the Discovery timeline.

Firstly, it's worth noting that the word 'Private' comes from the phrase 'private soldier', first used in medieval Britain to signify an individual hired (or forcibly conscripted) to partake in a military campaign, and were usually allowed to go back to their old life, at least until the next campaign. Back in those days, these individuals were not regarded as fully in the army, but mercenaries at best, or serfs at worst. They were soldiers, but not official members of the Army.

Some basics of this idea has remained in the British Army, and the US as well, in the form of withholding rank insignia until promotion.

In the British Army, the lowest rank of Private (Pte) wears no rank insignia. 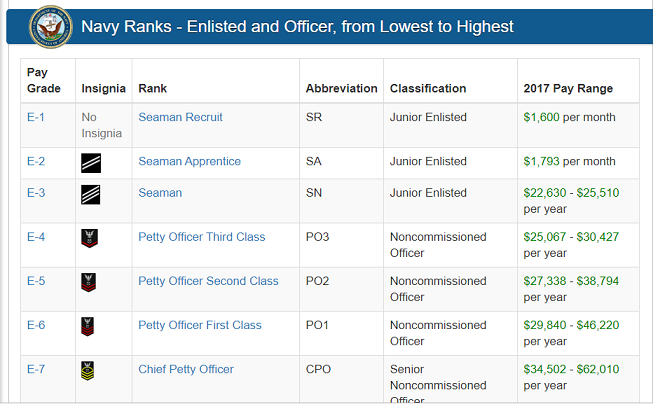 The phrases 'stripped of rank' and 'stripped of all rank' originally comes from the actual act of stripping the current rank, or stripping all ranking insignia from the soldier's uniform, respectively.

Military prisoners are demoted to seaman recruit (E-1) as the most severe punishment, and thus "stripped of all ranking insignia," while in military prison or awaiting discharge. This is to signify that they no longer have a rank that has rank insignia, yet are still subjects of the service.

Thus the phrase 'stripped of all rank' signifies demotion to the lowest rank of Private, and removal of ranking insignia. The phrase does not, by itself, signify discharge from service, although it is common for discharge to follow.

In the case of Michael Burnham, she was tried and sentenced by a Starfleet court-martial rather than a civil one because mutiny is not a civil offense, and thus her sentence must be served before discharge.

There is a war going on and like during any war, keeping your front-line supplied is absolutely essential. Dilithium is the main source of fuel for Starfleet, and this dialogue infers those civilian prisoners have been sequestered to the dilithium mines to replace the miners killed in an accident. Of course, it still seems a bit of a stretch for Michael Burnham, the first and only convicted Starfleet mutineer, to be there with them, and to answer that we need to look forward to episode 12, Vaulting Ambition.

In this episode it is revealed that Lorca is actually Alternate Universe Lorca, and has been manipulating his way through everything we've seen so far for his own personal reasons. Part of this manipulation involved finding Prime Burnham and getting her onto his ship (due to his relationship with Alternate Universe Burnham).

It is not be a stretch for a Starfleet commander of Lorca's standing to arrange for her transfer to the mines, ensure the Discovery was in place to arrange for the shuttle to get infected with species GS54, and conveniently rescue them. This is all heavily implied when Burnham and Lorca first meet, but only makes sense when the later reveal is made.

Lorca: Michael Burnham. The Michael Burnham, on my ship. When I saw your name on the shuttle manifest, I.. re-read your file. Pulled up your court-martial transcripts, and you're something.

Burnham: Captain, what am I doing on this ship?

Lorca: I guess you might have to ask that storm out there.

Burnham: I received no warning that I'd be transferred to another prison facility, which is customary. Then my shuttle changed course - halfway through the journey.

To answer what appears to be the main question (why is Burnham in a gold jumpsuit with blue Star Fleet badge and the other prisoners are in grey jumpsuits):

The other prisoners on the transport are civilian prisoners, this isn't stated explicitly but is implied in dialog (note they address Burnham as "Starfleet" in a negative way):

Therefore the other prisoners are wearing standard civilian prisoner uniforms.

The US Navy has uniforms for prisoners in the Brig for prolonged periods of time. Could this be the ST Universe version of that?

Prison uniforms in real life are often very bright to indicate they're prisoners. Often very bright to stand out as indication. Ironically the popularity of orange jumpsuits has led to real correctional centers abandoning them in favor of the classic black/white stripes. While civilian prisoners wore grey overalls, convicts who were members of Starfleet wore yellow overalls with a grey Starfleet insignia. Besides signifying they're former starfleet (and presumably more dangerous given their training) it acts as a form of humiliation by singling out one individual. 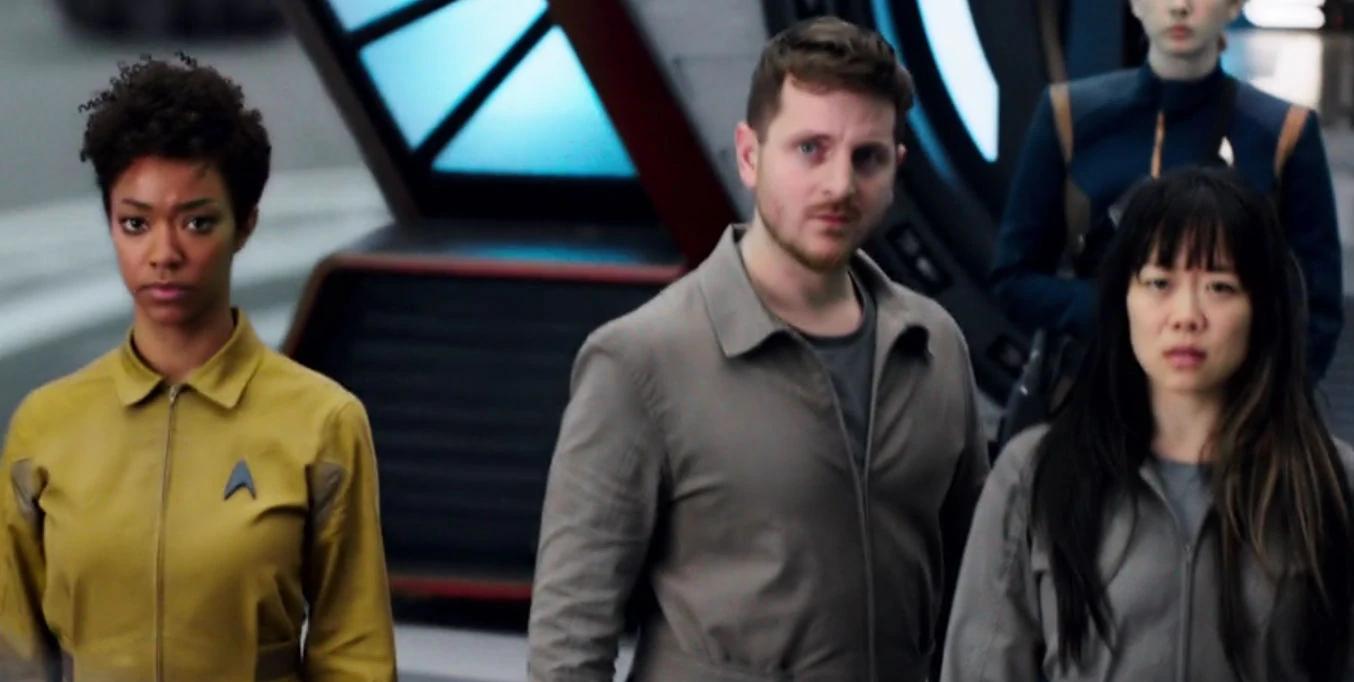