Was Xandar aware that Thanos was responsible for the extermination at Zen-Whoberi?

In Guardians of the Galaxy, the records at the Kyln showed that Gamora was the sole survivor of her home-world, Zen-Whoberi. 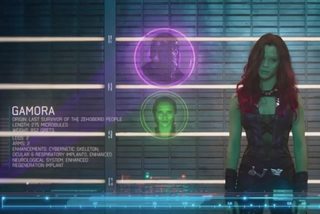 Gamora's mugshot (Guardians of the Galaxy)

In Avengers: Infinity War however, it is revealed that Thanos actually exterminated half of the population, contradicting the Xandarian information.

Gamora: I was a child when you took me.

Thanos: I saved you.

Gamora: No. No. We were happy on my home planet.

Thanos: Going to bed hungry, scrounging for scraps. Your planet was on the brink of collapse. I'm the one who stopped that. Do you know what's happened since then? The children born have known nothing but full bellies and clear skies. It's a paradise.

Gamora: Because you murdered half the planet.

Thanos: A small price to pay for salvation.

Nevertheless, one thing was clear: the Zen-Whoberians were exterminated (either completely or half of the population).

But was Xandar (Nova Corps) or anyone else in the galaxy aware that Thanos was behind the extermination of Zen-Whoberians? In other words, was anyone aware about Thanos' atrocities across the galaxy?

It seems unlikely that the Nova Corps would be unaware of what Thanos was doing across the galaxy seeing as they appear to have been keeping tabs on him somewhat.

Corpsman Dey: Gamora. Surgically modified and trained as a living weapon. The adopted daughter of the Mad Titan, Thanos. Recently, Thanos lent her and her sister Nebula out to Ronan, which leads us to believe that Thanos and Ronan are working together.

This makes sense as well considering in the image you show the hologram also shows Thanos' face so they know what he looks like.

On top of that Rocket knows who Gamora is and what she does, it seems likely a lot of others do, even if Quill is somewhat ignorant to it.

Peter Quill: So what? What's the Orb?

Gamora: I have no words for an honorless thief.

Rocket: Pretty high and mighty coming from the lackey of a genocidal maniac. Yeah, I know who you are. Anyone who's anyone knows who you are.

And of course the survivors of the planets that Thanos had wiped out would have most certainly spread the word of who was responsible, such as Drax.

Gamora: Your wife and child shall rest well knowing that you have avenged them.

Drax: Yes. Of course, Ronan was only a puppet. It's really Thanos I need to kill.

Gamora herself even tells Peter what Thanos did as further evidence of this. It is possible she has also told others.

Gamora: He's not my father. When Thanos took my home world, he killed my parents in front of me. He tortured me, turned me into a weapon. When he said he was going to destroy an entire planet for Ronan, I... I couldn't stand by and...

On top of that we know that the Ravagers, such as Taserface, know who Nebula is.

Ravager: She's the daughter of Thanos.

Taserface: I thought you were the biggest sadist in the galaxy.

Nebula: That was when Daddy was paying my bills.

With all this together it seems highly unlikely that the Nova Corps and a lot of the intergalactic worlds did not know who Thanos was and what he was responsible for.

15
Who was the Broker brokering for?
5
Where was the Xandarian Fleet when Ronan attacked Xandar?
8
Why wouldn't the Kree Empire condemn Ronan's actions?
5
How was Ultron aware of the Infinity Stone inside Loki's Scepter?
3
Why did the authorities think the Winter Soldier is responsible for this attack?
7
Are the public at large aware that Tony Stark created Ultron?
9
Was Xavier responsible for the Westchester Incident?
44
Why does the Nova Corps list Gamora as the last of her species?
21
Was Thanos really waiting for all these characters to die?