I read this book when I was younger. The cover had a picture of an Asian girl in a spaceship and her companion was just this floating ball with a face. The main parts of the story that I recall were the girl was in her room, living her everyday life and doing homework when a spaceship showed up at her window. She got in and did some missions on the spaceship. The little companion tagged along for all of them.

One of the missions involved her going to another planet which was covered in red dirt and seemed to be abandoned. She was exploring a tower that was in a village of red dirt homes. I believe at one point on the way to this planet, she got caught up in some battle in the sky and almost had her spaceship fall out of the sky but somehow managed to fix it.

This sounds like Akiko books. The first book is Akiko on the Planet Smoo. 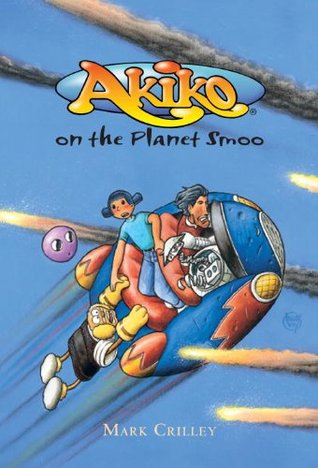 Fourth grader Akiko finds a spacecraft hovering outside her window one night, is whisked off to planet Smoo to find kidnapped Prince. How can Akiko head a rescue mission when she's afraid to be on the school's safety patrol? The team includes -- Spuckler Boach, Gax, Poog, and Mr. Beeba.

The floating head alien is Poog.

I remember it from providing the answer to Girl meets aliens, including intelligent purple ball, although the parent question would be Late 90's or early 00's graphic novel with a girl and an airship.

17
Late 90's or early 00's graphic novel with a girl and an airship
4
Girl meets aliens, including intelligent purple ball

5
Novel about a scientist communicating telepathically with cat-like aliens?
9
Children's Science Fiction Novel: girl from future visits ancient humans, boy believes she is a magical spirit
7
Six colonists from Terra are kidnapped enroute, and placed on different planet by unknown aliens. Novella 1980's read
4
What's this book about a girls coming-of-age tale οn another planet?
5
Graphic novel with red - headed girl at a magic boarding school
5
Young adult novel with a forest in it
4
Looking for a fantasy book with a red haired girl heroine
10
Looking to identify a book, Earth is in trouble, girl sneaks aboard a spaceship
5
Young adult novel about a girl with a robot housekeeper on an Alien Planet