Where does the image of a data connector as a sharp metal spike originate from?

In several fictional universes, if a robot or cyborg has to physically interface with a computer, a very long sharp metal spike is used, instead of a normal cable socket with multiple wires insulated from each other as we do in real life. Bonus points if that data connector doubles as a deadly weapon.

I don't remember any real-life data connector of that style (besides headphone jacks, but they are nowhere that big). Did such a thing really exist, and which fictional universe does it originate from as a standard robot's interface kit? 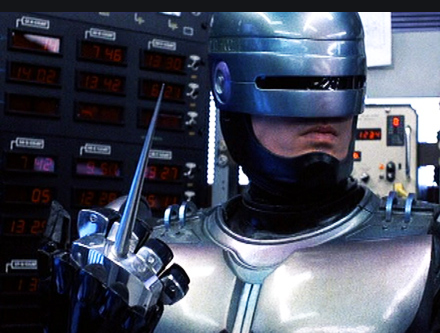 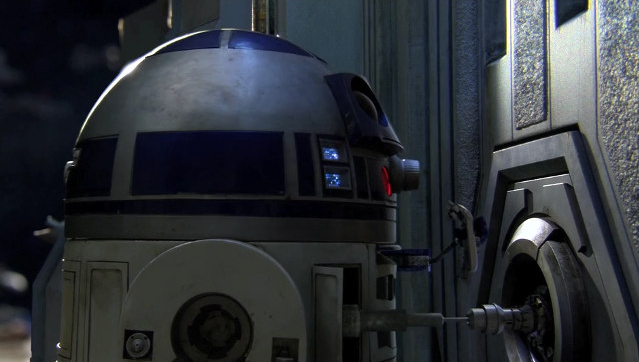 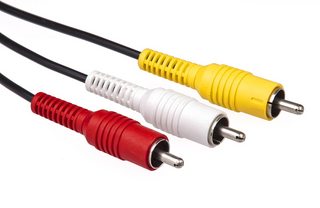 And coaxial cables have spike connectors too: 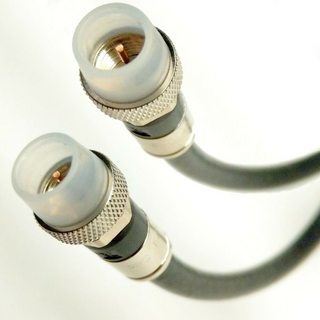 As well as cable TV, the first commercial versions of Ethernet, 10BASE5 and 10BASE2, used coaxial cables. Additional connections could be made by piercing the cable at any point with a vampire tap. This system was phased out in the late 80s.

Firstly, have you ever stepped on a BS1363 mains plug prongs up with bare feet? You won't have forgotten that in a hurry. There aren't enough F-words to cover it. Your dreams may mutate it into something even more fearsome.

Secondly, the headphone jack we are familiar with is a minaturized version of the quarter-inch jack. That was not so small. ISTR there were even bigger versions with multiple rings used in early telephone switchboards.

Finally, I think it was William Gibson in his early Cyberpunk phase who invented the "data spike". I can't remember if he ever described it in detail, so probably not. I always imagined it as having similar proportions to a quarter inch jack at the time.

A long long time ago, in a galaxy not so far away, there would be a big fat coaxial cable running through the building. You would connect to it with a gadget that would drive a spike through the outer sheathing/grounding, and connect to the inner conductor.

To expand a little on what Taladris said in their comment, and to be a frame challenge, the main object of the data connection being a large pointed spike might be to startle the viewer. Of course, this is an "out of universe reason", but the question isn't exactly an "in universe" question anyway.

IIRC, the first time Robocop extends his data spike, he startles the nearby cop. To me, it's obvious this was done for dramatic effect. If the cop was as tech savvy as he should have been in that situation, it shouldn't have surprised him by recognizing it for what it was. It also happens to be located where it can emulate a lewd hand gesture, which isn't at all necessary for a data port. 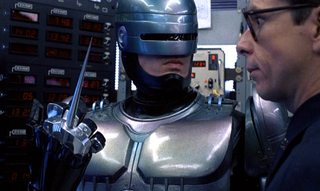 Later on, Robocop uses it to kill a badguy. This, again, is more of a dramatic reason for having it as a spike than any other shape. Robocop could easily have grabbed the guy's throat and ripped it out, instead of spiking him in that same scene.

R2D2 was a maintenance or copilot droid, so he was compact without arms or tentacles, so he needed something to physically connect to the machines he was fixing or flying.

Since it's easier to connect 2 things when the male end is pointed, it makes sense this isn't a square end. NASA uses a similar technique when docking space craft. The tapered end allows you to get "close enough" and then it seats itself. In an emergency situation, the C3PO robot wouldn't necessarily have the time or the steadiness (think loss of artificial gravity) to spend 30 seconds to get 100% lined up with a data port. 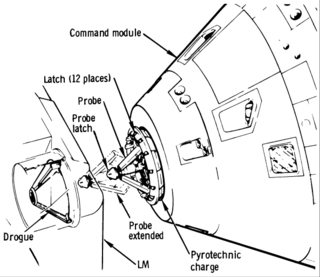 There's also the aspect that this port is rotated while in use, so something round would make easier insertion, rather than a rectangle that doesn't allow being off by even a handful of degrees, as in the dreaded USB connector which live in the 4th dimension. 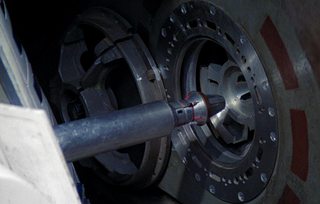 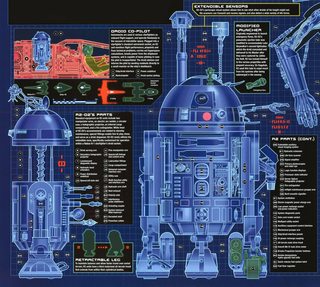 Vampire taps are a thing, but they are generally enclosed as well as small. What they do is puncture the insulation around a cable as well as slightly embed in the wiring. This is so a technician can tap into the wire without having to cut and splice the original wire, and was considered a permanent or semi-permanent situation. Removing the tap was allowed, but precautions had to be made to prevent the wire from being further damaged after removal, such as with spills or bends.

I can't get a good read on when vampire taps were first used, but it appears to be the 70's, so would predate both Star Wars and Robocop. 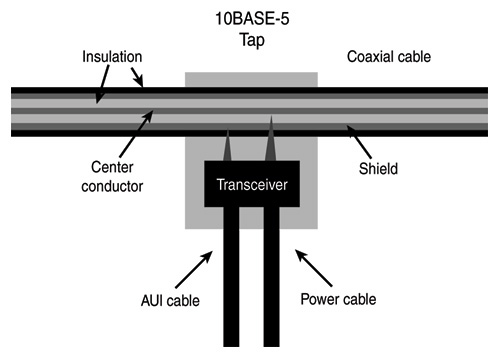 I think I've made a case for the data connector to not really have any realistic precursor in reality, but it's either for dramatic effect (Robocop) or it's a practical application of technology (Star Wars). Vampire taps seem to have existed before both movies, but it's unlikely that anyone outside of geek/nerd culture would know about them at that point in history, and they aren't an obvious precursor to either movie device.

There is a spike connector in use currently and almost every electronic devIce you own has been connected by it. 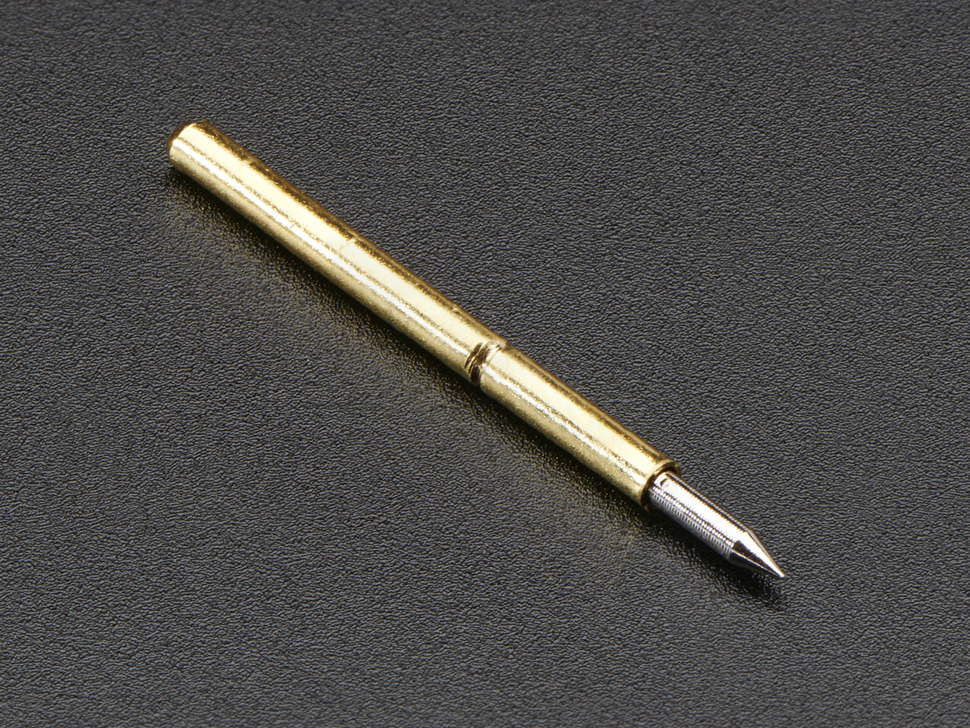 Pogo pins are spring loaded contacts that are often pointed used to make temporary connections to circuit boards when testing them. The board will be loaded into a jig (often known as a bed of nails) that precisely aligns the pogo pins over the test points on the circuit and them pushes them down to make contact. The tester can then run through various tests either inserting or reading signals at the test points.

A spike works well for both purpose as it can physically contact the circuit so you don't need a socket added at that point, the point is often driven slightly beyond the surface contact point making a good connection and the long narrow shape makes it easier to avoid any components that may be around that spot.

The probes on a multimeter are also typically spikes for this reason.

Given that in most depictions of data spikes you see are unauthorized or unanticipated access then they are essentialy oversized test pins intercepting or injecting data/signals into a system.

The old telephone switchboard jack is a strong contender for "first" in this race. According to the linked Wikipedia page, manual switchboards (which featured operators plunging ~2-inch long pointy-ended jacks into sockets over and over as they connected each call) were in widespread use by around 1880, so they predate RoboCop (1987) and Neuromancer (1984) by about a century.

The 1/4-inch (or 6.35mm) audio jack, being a single exposed cylinder with a dramatically tapered end, presents a much more 'spike'-like appearance than coaxial connectors with their center pin partially concealed in a collar, and also predates the Radio Corporation of America's introduction of the coaxial RCA connector (1930s) by several decades.

Given that this very same 1/4-inch jack is still in widespread use for musical instrument, microphone, and audio patch-cord applications, it's safe to assume that they are a familiar sight to anyone who has spent time around film sets or recording/production studios, which presumably includes the writers and directors of movies and TV shows. So in addition to the fact that this connector significantly predates the contenders mentioned in other answers, its ubiquity also lends weight to the idea that it likely inspired various fictional 'data spike' connectors.

During the Vietnam War, MACV/SOG Special Forces teams used a wire tap to tap North Vietnamese telephones that inserted a thin wire into the telephone line to pick up the signal. However, they betrayed the presence of the team, and so were eventually replaced by induction taps. 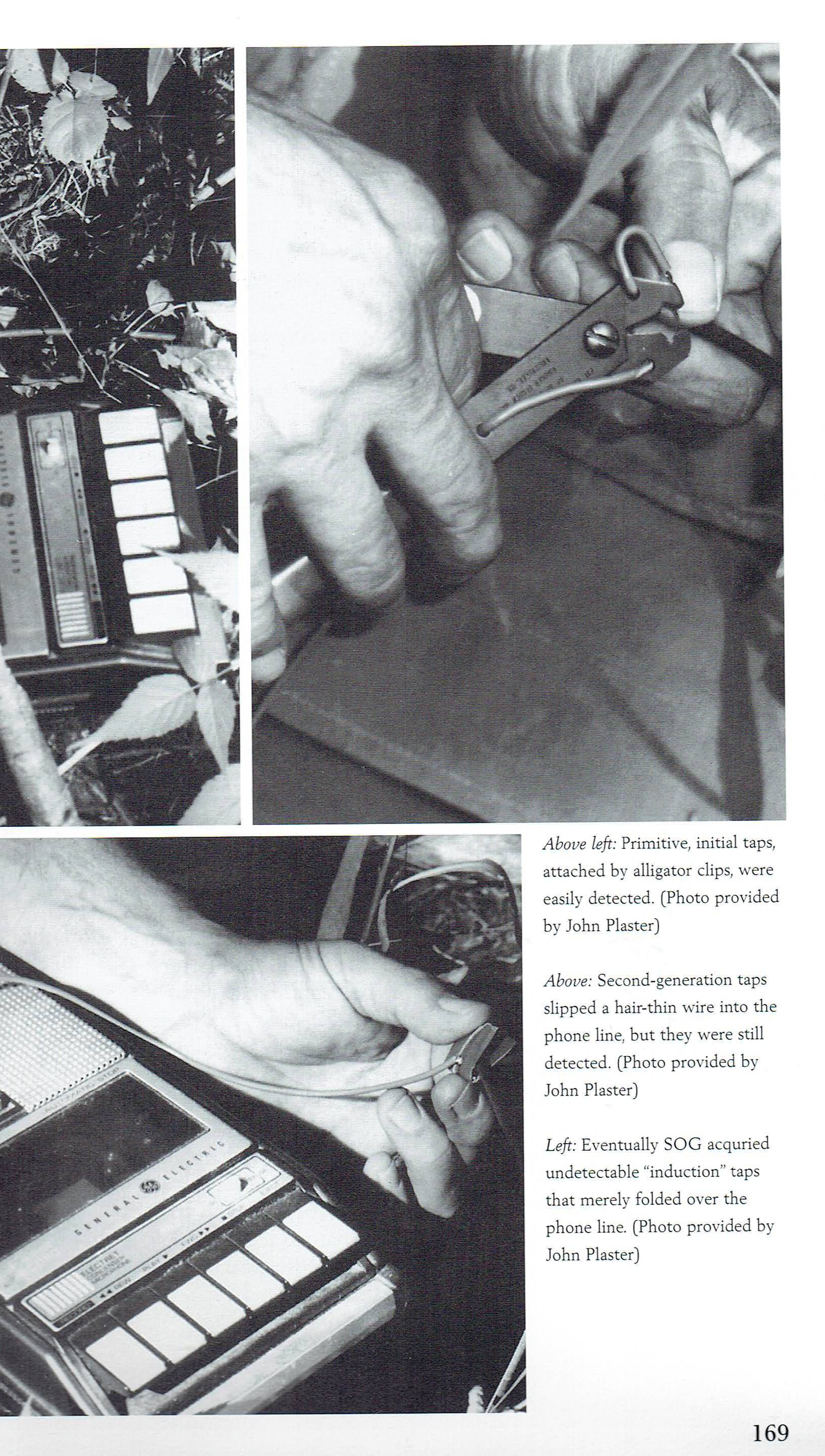